is a very interesting car. From its 435hp twin-turbo 4.0-litre V8 diesel and 48V-driven 'Electrically Powered Compressor' combination to the 4.9-second 0-62mph time there's plenty to arouse PH interest. Even it is, ultimately, just a very fast

Let's deal with that elephantine aspect first. I've always considered the Q7 the very embodiment of the brand's less favourable qualities. Owners, feel free to join the comments thread and tell me I'm full of it. But it's always struck me the key motivation for buying a Q7 is arriving in an Audi showroom and saying "I just want the biggest one". In the case of the SQ7 you can now extend that to "the biggest AND fastest one", like that makes it any more palatable.

Let's face it, you'll not be buying it on looks. Much as I didn't like what the original Q7 represented I could at least accept its successful upscaling of Audi design and values. This new one though? The grille looks disproportionately large, the overhangs ungainly and the previously clean shape seems to have gained all sorts of unwelcome surface 'detailing' and heavy handed sculpting. But it presumably fits the bill for those who just want as much Audi as they can get. Unless interior space is a priority; for all its ginormous external proportions there's not quite as much room inside the cabin or boot as you might expect. 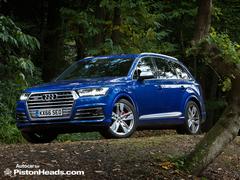 Anyway. Off the anti-Q7 soapbox. What about that fascinating engine? It is genuinely amazing, however the shifting favour against diesel manifests itself in coming years. I'll work on the basis you're probably not tickled by the idea of an eff-off V8-powered SUV if tree-hugging features highly on your list of favoured recreational pursuits though. Because if you want a large, family friendly SUV with an Audi badge on the nose and more than adequate power, then the regular 3.0 TDI is up to the job.

No, if you're looking at the SQ7 it's for reasons more than just fuel economy and range. This is a properly rapid car. Not 'rapid for a diesel' or 'rapid for an SUV', just rapid full stop. Whatever it looks like and whichever pump it fuels from that's got PH merit.

Like the previous V12 TDI Q7 this is one of those 'all about the engine' cars that geeks like us can appreciate too. The cylinder count and configuration are a sound start but the addition of the Electrically Powered Compressor to the two exhaust-driven turbos gives it astounding punch. The EPC's job is to prime the induction charge before the turbos have spooled up, the way the boost gauge shoots up before you even deploy the throttle offering the first sense of what it's up to. Suitably awoken throttle response is razor-sharp, the V8's 664lb ft from barely more than tickover making a mockery of the SQ7's bulk. Acceleration is angry, quite frankly, and that sub-five 0-62 time feels a conservative estimate. Nor does that rate of progress abate either. 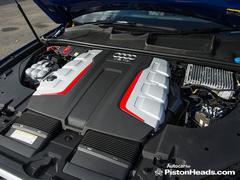 It's a fantastic engine, no doubt about that

There's some really clever stuff going on here too. This is the first time Audi Valvelift System has been used on a TDI engine and it uses variable opening of the exhaust valves to control the sequential turbos. At low revs one exhaust valve remains closed, gases directed to the 'active' turbo as Audi has it. Above 2,000rpm and when the loads dictate the second valve opens to wake up the second turbo. Before any of this has happened, of course, the EPC has already been on the case.

And it sounds great too. There is a 'sound actuator' in the exhaust system but from the outside there's enough V8ness to suggest fakery plays only a supporting role. Suffice it to say even the tickover rumble inescapably signifies the SQ7's intent. Given it costs nearly £20K more than an S Line 3.0 TDI you'd rather want that though.

Making sense of all this performance is a chassis fully stocked with all the latest gizmos, on the assumption that you're willing to pay the additional £5,700 for the Driving Dynamics Sport Pack. Box ticked, that 48V network operates the active anti-roll system (given it utilises up to 885lb ft of torque you can appreciate why it needs the electrical grunt) and there's also four-wheel steering, all of this and more adjustable via the modes in the Audi Drive Select. Also included is Audi's trick torque vectoring Sport Differential for the rear axle, experience from our S4 Avant long-termer suggesting this can have a transformative effect on the way fast Audis go round corners. This lot on top of the standard air suspension, multi-mode dampers and all the rest. Yes, an awful lot of tech for a family-friendly SUV. 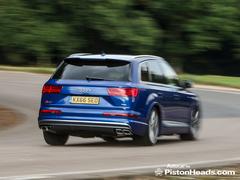 Tech does an admirable job against the weight

No need to apologise

And means you can drive it in a suitably unapologetic manner, should the mood take you. While it hardly shrinks around you the combination of four-wheel steering helping you on turn-in and the Sport Differential deploying that incredible power and torque on corner exit you've got a machine that can get around corners way more quickly and dynamically than you'd credit. Nobody will love you if you drive it thus - not your passengers and certainly not your fellow road users. But it's undeniably impressive. And the deployment of that incredible urge is never less than shocking.

As a package it's a typically polished affair too, Audi's mastery of tech and the presentation thereof all top notch. Well, mainly. Does anyone actually use touchpads on the move? I can barely use them when stationary but the MMI interface is awkward to use unless you play by the rules. And the semi-autonomous driver aids are about as 'smart' as the motorways they're intended to conquer. Put it this way, having the cruise control try and accelerate you back to 70mph when you set it at 55mph for a temporary restriction is scary. When it then clocks the signs and brings you back to an obedient 50 you then get trucks on your back bumper flashing their lights in your mirror in a most un-Audi like role reversal. Who'll be brave enough to contest a fine on the basis that their car's cruise control overrode their input and automatically increased the speed to beyond the posted limit? Good luck with that one but it'd be a fascinating case study to follow.

You'll have got the gist now by sure. This is a big, fast Audi. An interesting one, if not necessarily a commendable one. And possibly spectacularly mistimed if the tide really is turning against diesel. For those with an eye for technical intrigue though a car with plenty to occupy your curiosity. And I mentioned it was fast, right?