Ultimate poser's Porsche or still the real deal? PH dresses for the occasion and gets on track in the GT3 RS

Just what is the etiquette over going full Nomex on a track day? If your car has harnesses it's maybe acceptable; if you're self conciously wearing your branded overalls to the hotel breakfast before even getting to the track I'd argue not. Having witnessed supercar owners doing the latter I've never wanted to be 'that guy'. 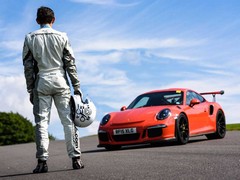 All the gear and no idea; same for the RS?

that mindset in four-wheeled form? I've previously argued a whiff of this in

; arguably the smell is stronger around the new-school RS. "The new Porsche 911 GT3 RS breaks down the barrier between street-legal sports cars and race cars more than ever," says Porsche in the opening paragraph of its press pack on the RS.

OK then. Let's skip the track day and see if it really can keep up with real racing cars. A race would be great. In the absence of that a test day could be the next best thing. It even gives me licence to wear my racing suit...

Best laid plans
I arrive at Donington having driven down the M1 in relative comfort thanks to creature comforts like air-con, nav and leather seats. Sure, plastic rear windows, tyres that'd make a steamroller blush and rose-jointed suspension all contribute to a dose more NVH than a regular 911. There's perhaps the most basic dash trim of any 991 I've ever driven and plenty of 'connection' with the car thanks to the clonks through the drivetrain, spatters of gravel inside the arches and odd twang from the cage. But for all the outrageous looks the biggest surprise about the RS is quite how easy it is to bimble along in. All the gear and no idea? 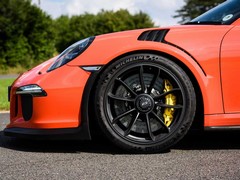 . Without even the most basic 'qualifier' of a snappy clutch and single mass flywheel will the new RS still weed out the mere posers so effectively?

When I arrive at Donington Jonny from BookATrack does his level best to convince me heading out onto a track packed with racing hot heads in an expensive road car really isn't the best idea and we can instead just use lunchtime for an empty track and photos.

Perhaps getting suited up will help me get in the mood.

Is this a good idea?
No, it doesn't. Basically I've got as long as it takes to accelerate out of the pit lane and Redgate to adjust my mindset from 50-limited M1 mooching to maximum attack. Tyres and head are not up to temperature; those of everyone else very much are. 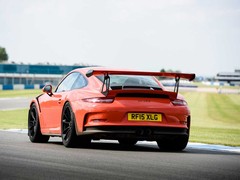 Not exactly shy at the back either

Thankfully I've emerged into some free air, giving time to dial into the car and learn my way around. Immediately it's clear how important context is to how the RS feels. On the road I've not touched any of the buttons, beyond engaging the loud exhaust mode. Here I can't even do that, the RS sailing perilously close to the 98db drive-by limit as-is.

The PASM dampers have a Sport mode but beyond an experimental prod I've not touched it on the road. Not because the car is overly stiff; more because the damping is so good and the car so exquisitely balanced in the standard mode there isn't the need. The firmer setting just adds harshness and a bit of camber sensitivity to the front axle, the wheel snatching under braking on bumpy corners where in the standard mode it just flows beautifully.

This is the great surprise about GT Porsches - they are actually excellent road cars. Indeed, the RS's chassis is actually far more compliant and balanced than the PASM Sport set-up on the 911 GTS I drove recently. Thank superb damping and the helper springs that permit short main coils and slammed ride height but allow a longer damper stroke and additional bump swallowing droop. 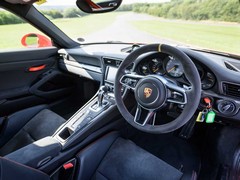 About the most basic dash you'll find in any 991

All mouth ... what about the trousers?

On the track that means the RS can be bounced off kerbs without the wheels skipping off the ground, the car remaining absolutely planted no matter how hard you clatter it over the bumps. Extreme for a road car but mild in competition terms, there's definitely increased stability from the aero too. You can even feel it at motorway speeds but in the heart-in-mouth plunge through Craner Curves the RS goads you into carrying more speed. But even in PASM Sport it feels road car soft, all things relative.

Do I miss the manual? In some ways yes; I'm not chasing lap times and it does feel a bit PlayStation. But in its place I've got sheer speed, confidence to downchange deep into the braking zones and the ability to upshift when and where I want. In PDK Sport you even get sense of race sequential, albeit without the unsettling jolt as the shift goes through. 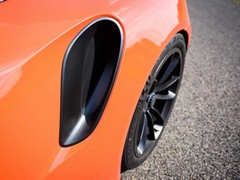 Ram effect for induction air via side vents

Opportunity to explore the upper reaches of that incredible rev range are so fleeting on the road it's taking some real discipline to not short-shift before that final 8,800rpm crescendo. 200rpm lower than the GT3's 3.8 but who's counting; the character is much the same with a flat torque curve that suddenly erupts from 4,000-6,000rpm before that final shriek to the redline. RS upgrades include titanium con-rods, forged pistons plus a crank stroked by 4mm and machined from the same 'pure super steel' alloy as that of the LMP1 919 Hybrid.

By the numbers the gains over the 3.8 GT3 aren't that dramatic, extending to an extra 25hp and 15lb ft with 10kg off the kerbweight too. The 28mm wider Turbo bodyshell, the boosted front track and the additional aero probably explain the fact it's actually 2mph slower at the top end, a shorter final drive to compensate for bigger wheels (4.19 compared to the GT3's 3.97) and the extra grunt helping it knock a couple of tenths off the 0-62 time. It's not here the tenths matter though; over a lap of the Nordschleife (usual disclaimers apply...) its 7min 20sec is five seconds quicker than the GT3 and faster than a Carrera GT. 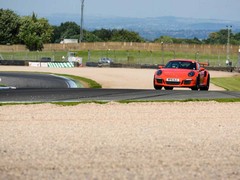 Needs room to stretch its legs

In isolation it's seriously, thrillingly rapid but straight-line heroes accustomed to forced induction cars may actually find themselves a little underwhelmed with the linearity of the power. If that's you then buy a Turbo S. The RS is more about sensation and savouring those transient moments where the car is seemingly being pulled in several directions at once.

From the outside the RS looks enormous and laugh-out-loud bonkers. By some stretch this is the wildest looking road going 911 ever and there's more than enough aesthetic and technical detail to set it apart from even the GT3. The carbon wings, front and rear lids, the magnesium roof (nearly a third lighter than standard), the distinctive recess running over the nose and body, the vents, the scoops, the titanium exhaust, THAT wing ... it's properly OTT. Whisper it but even at the optioned up price of £145,626 it seems good value. 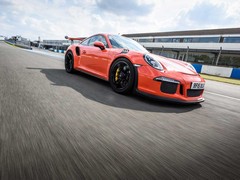 However this is all garnish over the way it drives. Because once you're in it you forget the looks, the four-wheel steering, the active locking diff and the other gadgets to just relish the way it feels. There's adjustment aplenty in anti-roll, ride height, camber and aero but out of the box the 991 manages to feel as small, nimble and adjustable as any RS. All that 911 magic seemingly dialled out of the regular car? It's right here.

And it's a virtuous circle as well. Faith in the additional grip of the wider front track gives you confidence to play with the weight shifts and exploit that classic 911 pendulum effect as if you were in a pint-sized 2.7 RS. Stability under braking is significantly better than the regular GT3 so you can haul it up straight from huge speeds and then play with the cornering attitude with trailed brakes, a lift or simply under power. Or, when it all comes together, a seamless combination of the above. 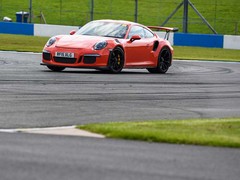 And yet it feels playful and chuckable too

The downhill approach to the Melbourne hairpin is a good example. The PDK means you can stamp hard on the brake with your left foot while flicking down through the gears, confident even the downhill gradient won't unsettle the back end. Bleed the brakes off as you turn in, pick the throttle up nice and early and it'll carry a smooth arc round the corner; lift to tighten the line and you'll need a quarter turn of corrective lock and, if you're quick enough on the power, a beautiful transition into a four-wheel drift on the way out. All this on sticky Cup rubber and with the stability control fully on.

The limits are seriously high yet so transparent and exploitable it's an absolute joy to drive hard, demanding but still accommodating at the same time. And throughout there's that noise, drilling into your head, zinging through the cage, seats and bodywork, tingling through the Alcantara of the steering wheel. This is a very different car from previous RS models. But one that delivers very familiar thrills, albeit at a much, much higher level. Like the McLaren 675LT, the RS proves that feel and feedback are still absolutely critical to enjoying a fast car and of at least equal relevance to impressive stats and technology. 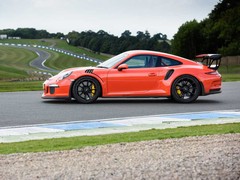 I'm wary of getting too involved with some of the punchier driving the test day permits but, yes, for a street car on road-legal rubber in no way does it feel out of its depth among the racing machinery. I still feel like a bit of a tit in my suit. But there's an illicit sense of mischief about gatecrashing a day for proper racing cars and more than keeping pace.

Is there a problem with the RS, other than not having enough down the back of the sofa to buy one? Yes - basically it shows up how inert the rest of the 991 line-up has become. You can still buy a proper 911 that drives like the ones we loved best. It's just a shame it's hidden at the very peak of the range.

Lap of Donington in the GT3 RS

Thanks to BookATrack for admitting us to their Donington test day; for info about these, regular track days and rental/instruction packages with their dedicated fleet of Caterhams see here.