Kids today banging on about that 'drifting'? Bless...<br />

Some cars get under your skin without you realising. Someone mentions a name and an image pops into your mind even though you don't really recall paying any attention to that car. Take Baby Bertha, the V8-engined Vauxhall super saloon with which Gerry Marshall battered his rivals into submission during the 1975 and 1976 seasons. 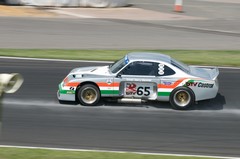 At the time all my youthful focus was on Formula One (no, really, it was quite exciting back then), and yet almost instinctively if Baby Bertha was dropped into conversation I could picture the silver beast with the red, white and green stripes thundering around Mallory, Cadwell et al.

It must have been the subliminal influence of Grandstand, the Saturday afternoon sports programme of the era that covered the whole gamut of the sporting spectrum - national motorsport series got an airing as they happened, not in the depths of night when Sky Sports seems to run such events. What that meant was that Marshall's heroic exploits in the silhouette-bodied Vauxhall were there on your telly, digging their way into your memory banks, even if you hadn't specifically switched on to watch them. 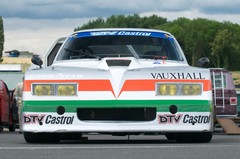 And what a double act Baby Bertha and Marshall made: the brawny Vauxhall and the physically immense (particularly by the standards of today's gym-bunny drivers) racer, a man who had the good humour to call his first biography

Only Here for the Beer

. First generation in-car footage - of which a surprising amount exists on YouTube - shows Marshall wrestling the 500bhp Modsports entrant around corners, cajoling the tail back into line, commenting on how light the car could get over crests on the circuit. And the outside shots were impressive too, Baby Bertha demonstrating a degree of body roll that modern drivers would find laughable, and the car's nose scraping the ground in the type of unsettling dips you find at places like Mallory.

Not that Baby Bertha and Marshall always had things their own way. Modsports racing at the time was hairy and furious, with cars that looked a little bit like Skodas and Dafs keen on chewing lumps out of the Vauxhall's extended tail. And yet in more than 40 races that spanned three seasons, the dynamic duo Did Not Finish just twice, and came second once - it was a spectacular record. 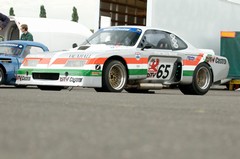 We catch up with Baby Bertha at Mallory Park, Leicestershire's quintessentially old school circuit. It's a fitting venue; Marshall scored some great wins here, and visually it seems little changed from the

footage, although the colours are a lot more vivid than you got on the telly back in the day. Big Gerry, of course, is no longer with us, but the atmosphere in the paddock seems similar to that from his era, with many of the cars delivered to the circuit on open trailers, and plenty of oil-splattered mechanics either with their heads in smoky engine bays or chatting with each other and the spectators.

We're all here because the Classic Sports Car Club wants to revive Modsports racing and has encouraged anyone who still has one of the cars - and who really haven't had a series to competitively run it in for several years - to drag it out of retirement in time for a race, at Mallory, on Bank Holiday Monday, August 29. Today is a shakedown-cum-media day for that race, and the hope is to run a series during 2012. 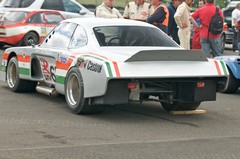 It takes a while to get down to Baby Bertha - there are so many other distractions. Fat-arched Capris and Escorts; knee-high Skodas and Elans; a truck-wide Jaguar and a flame-painted Corvette. For anyone who became motor racing savvy during the 1970s and early 1980s, this is time travel of the most delicious kind.

And then, at the far end of the paddock, is the lady we've come to see. A caricature racing car with distended arches and elongated nose and tail. Very well proportioned, though, and not as large as it seems on YouTube. Silver paintwork pretty much pristine, its red, white and green Castrol stripes as distinctive now as they were in 1975 when Marshall and DTV (Dealer Team Vauxhall) took the first of two successive Modsports titles. To modern eyes the bodywork has a pre-wind tunnel innocence - yes, it has a small ducktail spoiler on the boot lid, but there are no splitters or winglets or any other addenda that now seems essential to stick a race car to the tarmac. 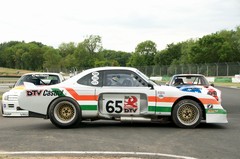 Baby Bertha was originally built from components of Big Bertha, a racing prototype intended to herald the arrival of a V8-engined Vauxhall Ventora - the 1973 Oil Crisis scotched the car's production hopes, while a massive accident turned Big Bertha into a pile of parts. Vauxhall's motorsport campaign was having an impact in the showrooms, so rather than waste the salvageable pieces of Big Bertha, Bill Blydenstein, ably assisted by Frank Costin, were commissioned to create a new car, based on the smaller, nimbler Firenza coupe. Of course, not much of the production model was retained, just the central section of its shell, to which were added either end spaceframe subframes covered in glassfibre body panels.

Baby Bertha, as the Firenza was christened, inherited its ill-fated predecessor's near-500bhp 5.0-litre V8: this had made the long journey from Down Under, supplied by racing outfit Repco, an affiliate of GM's Australian division Holden. At some stage over the years this engine was prised from the Firenza's chassis - where it sat a long way towards the middle of the car - to be used in another race car, but Baby Bertha is still powered by a GM-sourced eight-banger dishing out the best part of 500bhp. 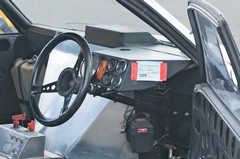 After Baby Bertha retired from front-line competition in 1978, it passed through a string of different owners, including Gerry Marshall himself - in a one-off appearance at Thruxton in 1981, he hustled the by then senior citizen to a second place. Current owner is the superbly moustachioed Joe Ward who has been the car's guardian since about 1986 (although in an interview in 2005 he thought he'd picked it up in 1981...).

He confesses that over the years he "hasn't really done much with it." In part this is because there hasn't been an appropriate series to run it in, and because "it just didn't seem right to race it while Gerry was still around. Besides which, I couldn't have stood the piss-taking he'd have given me for not being as quick as him in the car!" 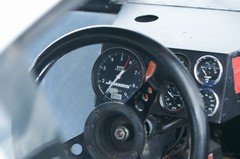 Joe has kindly offered to take me for a few laps of Mallory in Baby Bertha, a true privilege. While I'm being strapped into the passenger hot seat, there's a chance to marvel at how basic it is inside. All race cars are stripped out, of course, but Baby Bertha's cabin retains nothing from the production Firenza: it's a sea of sharp-creased aluminium sheets fabricated into functional forms and peppered with contemporary off-the-shelf competition dials in front of the driver.

Compared with modern race cars you sit high in Baby B, and there's a surprising amount of space inside. Also notable are the thinness of the roof pillars and the somewhat rudimentary nature of the roll-cage. Belts tightened and Joe fires her up; it takes a second or two's whirring from the starter motor before the big V8 catches, then it barks and grumbles into life, soon settling into a slightly cranky idle. Already it's loud in the cabin, though not ear-splitting, as today Baby B has her silencers on. 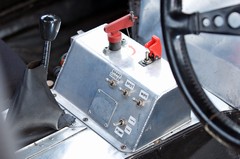 Some mild grinding noises, then a loud mechanical thunk, meaning Joe's grabbed a cog and dropped the clutch. We don't rip out of the pit lane in a scream of revs as you'd do in something modern: you sort of feel a great swell of energy being released on top of which Baby B surfs along, very fast yet not manic. And the noise is V8-great, gravelly and deep toned, overlaid with a rich, menacing flutter. Through Mallory's long sweepers Joe holds the revs to about 5500rpm - which is where the 380lb ft of torque peaks - nosing up to the edge of adhesion of the car's elderly Dunlop 'wets', all the while feeding in little jabs of steering to keep us toeing the right line.

Baby Bertha is a bit soft and rollsome by modern standards, and because of that seemingly quite playful, though through the tighter bends, particularly Shaw's Hairpin, Joe's careful not to punt the tail too far out of line. Gerry might have been the master of sideways in this car, but you sense that its current owner is prepared to sacrifice a chance to showboat in favour of the long-term preservation of a British motorsport icon. 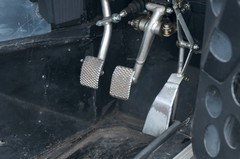 Anyway, few drivers could - or indeed can - mimic Mr Marshall's exuberant driving style, so I don't blame Joe for his more cautious approach. Besides, looking out through the windscreen at this particular circuit, there's more than a hint of actually being a part of that old racing footage snaffled from

and contemporary Vauxhall promo films. Baby Bertha's alive and animated and not beholden to computer-developed aerodynamics or boffin-tuned electronics: she's raw and ever-so slightly uncouth, demanding of the driver yet clearly rewarding of thought and effort.

Baby Bertha will be in action alongside other V8-engined monster from Modsports, Saloons, Special & Thunder Saloons, and Donington GT-type racers, at Mallory Park on Bank Holiday Monday, August 29.