Super saloons battle for glory; tyres were harmed in the making of this story

Could you ask for a more PistonHeads selection of cars than this? Sure, we all like proper sports cars, from track specials to hypercars. But super saloons like this just tick so many boxes.

You'll be familiar enough with our contenders and the fundamentals remain pleasingly similar - big power and rear-wheel drive, but with enough practicality and luxury for daily pleasantries. Their starting prices range from £60,355 for the BMW to £67,450 for the Mercedes but, after options, all are to within a grand or two of £75K, making for a pleasingly level playing field.

All run twin-turbocharged engines but they differ in heritage and character. We've got a modern twist on the classic M straight-six, a thumping AMG V8 and an Italian V6 'inspired by' Ferrari - basically a California T motor with a couple of cylinders chopped off. We've got a dual-clutch transmission from BMW, an automatic from Alfa Romeo and AMG's halfway house in the C63; all feature variable damping, various engine modes, configurable throttle maps and electronically controlled locking diffs controlled via driver settings of varying complexity. All have been optioned with ceramic brakes too. With sensible hats on we'd say all this gives them a broad range of ability that best exploits their considerable power.

But we're not sensible. The serious consumer comparisons and stopwatches can wait for another time. We've got a track, some spare tyres and the desire to put the more crowd-pleasing handling attributes to the test. These are meant to be feel-good cars, after all. But which makes you feel best?

and F82 M4 haven't had an entirely easy ride since they launched back in 2014. The twin-turbocharged straight-six was a big emotional and technical step, the sound, character and power delivery of this complex engine a cause of some controversy. Likewise the spiky handling, not helped by damping that could struggle to contain the firepower. 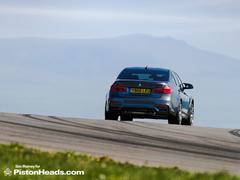 The Competition Package at least attempts to address that, the revised chassis settings taming some of the M3's wilder habits. And with time to get accustomed to it that engine's talents can now be properly appreciated.

And it looks awesome. It might be the only one with less than 500hp but the M3 is the best looking car here and, arguably, the one with the richest heritage to draw upon too. The stance is spot on, the saloon's swollen arches subtly but significantly more muscular than regular 3 Series and the details like the bonnet bulge and carbon roof just enough to set it apart. The Competition Package wheels are a bit iffy, but as a package it brims with confidence and intent. 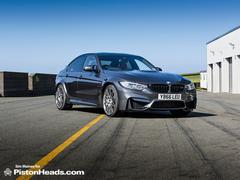 And would you just look at it?

And it's instantly got a harder edge than the other two. Our test is track focused and here the speaker-enhanced sound and rougher edges of the ride are less of an issue. Rather you can concentrate on the pin-sharp front end, the razor sharp throttle response (it really is amazing for a turbo engine), the huge powerband and the surprising appetite for revs.

It's lighter than the Giulia but the steering is a little mushier. But it feels like it could drive rings around the AMG and is just so resolved on track it's little wonder Matt is quickly gapping the other two at the head of the pack. OK, he's an unashamed M3 fanboy. But the BMW just gives you that kind of confidence and is the truest to the delusions of motorsport grandeur. It's the only one you can have as a manual too but, in all honesty, the dual-clutch M DCT transmission is perfectly suited to the car and the sharpest shift here by some margin. Immediately the bar has been set very high indeed.

The biggest, the heaviest, the most expensive and the most powerful (or at least most torquey) car here, the C63 S packs typical AMG swagger and the only V8 of the group too. The M3's motorsport vibes are all very well. But the thunderclap when you hit the AMG's starter button needs no assistance through the speakers, and at the 'civilian' speeds you'll spend most of your driving time the C63 plucks the heartstrings brilliantly. 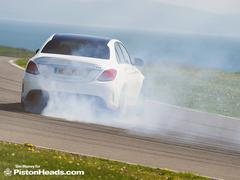 The rear-set cabin and long nose give it some slightly odd proportions from certain angles and, bar the quad exhausts, it's not as immediately attention grabbing as the other two. But it's by some margin the most lavish and luxurious and its sense of decadence (mechanical AND aesthetic) help justify the price premium over the other two.

Like the M3 there are driver modes galore but the differences between them more subtle. Where the BMW feels underdamped in comfort and harsh in Sport Plus the C63 simply offers incremental increases in composure without significantly altering its generally burly but plush character. Same with the throttle and gearbox settings, too. The heart of this car is its engine though, and whatever mode you're in it dominates the experience.

On track it feels like a bit of a lump compared with the M3 and there's a little more softness to the throttle, despite the extra cylinders and capacity. But once it's filled its lungs that V8 has massive reach and deploys its torque advantage to the full. The auto-with-a-clutch gearbox isn't as sharp as the other two but when you've got this much to lean on that's less of an issue. And if not a natural track car the C63 has one party piece that'll make you giggle like an idiot. 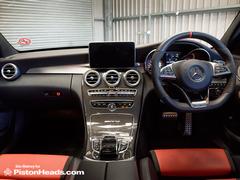 Rather lovely place to wreck tyres from too

Now, on the launch we said the S model with its electronic diff was seemingly less of an oversteery beast than previous AMGs. We must have been mincing. Because even on a dry Anglesey circuit the C63's appetite for bonfiring its tyres is outrageous.

The slower steering might rob it of agility compared with the other two, but it makes sustaining huge slides utter child's play. And once the rear tyres are lit up it's up to you (or your tyre budget) how long you sustain the drift. Don't think the smoke will subside on the straight either. Once spinning you can shift up through the gears to build the smoke screen AND keep accelerating at the same time. There's certainly more sophistication to this C63 than previous ones. But the hooligan nature hasn't been buried too deeply.

Here's the car with a point to prove. While BMW and Mercedes are entirely in their comfort zones here Alfa Romeo has had to start from a clean slate, identifying what the Germans do so well but needing to put its own Italian twist on the formula. 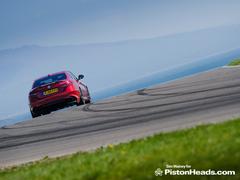 It was going well out here; really well...

It starts brilliantly, too. It's actually not quite as beautiful as you might have been led to believe, the proportions a little stumpy and the detailing a bit fussy. But it still works; and from the carbon splitter to the Quadrifoglio badges on the wings, the voluptuous side skirts and the serious looking diffuser and carbon lip spoiler there's enough to tell you that this is a proper car, even if you weren't aware of that

Thankfully there's substance too. The optional carbon backed Sparco seats (£2,950 well spent) are mounted nice and low and the steering wheel pulls right into your chest. The long paddles look great and have a properly assertive 'click' when you pull them - you even get the both paddles for neutral like you do in proper Italian supercars. It's a stylish cabin too, enveloping you in crimson leather and carbon and with enough panache that you'll gloss over some of the cheaper feeling switchgear and an infotainment system that's behind the Germans.

That point to prove nature comes across instantly in the driving style too. This is one pointy, aggressive car. Not just the engine that's 'inspired by Ferrari' either. If you've driven recent Maranello product you'll recognise the light and pointy steering, the action in the paddles and the eagerness to pile on the speed. Likewise the quality of the damping, the sophistication of the electronic control of the locking differential and the ability to be both speed merchant and hooligan in one. 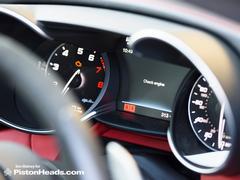 Once over its initial lag the California T derived engine has both the AMG motor's muscle and the M's eagerness to rev. It sounds a bit flatulent but it more than delivers on the numbers. And although it's 'just' a torque convertor auto, the calibration of the manual shifts is crisp enough to make the lack of a manual option here in the UK seem less of an issue. Basically the Giulia can do both (very) fast and neat like the M3 or go a bit nuts and lairy like the C63.

Well, it could. Right up until the 'check engine' light came on and it locked itself into Normal mode, meaning full stability control lockdown and its feisty side firmly out of bounds. Oh Alfa...

It would be easy to say the Giulia played up to all the worst stereotypes we might have about flaky electronics in Italian cars. Mainly because it did. Alfa Romeo is investigating what went wrong with our car and has promised a rematch, but it's hugely disappointing that on the day it wasn't able to put the potential it had shown into practice. More on this in the video to follow. 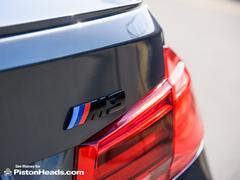 There's a clear winner on the day...

While we're having a moan the BMW was also somewhat hamstrung, mainly due to the fact the promised set of extra rear tyres didn't materialise and some thought had to be given to leaving enough rubber to drive home on. Which would have been fine if yours truly hadn't used up a significant amount on a couple of 'vital sighting laps', leaving Matt to nurse what was left for the remainder of the day. Less time showboating at least demonstrated the M3's ability to do neat and extremely fast, this probably the most rapid and track friendly car of the day. The on-paper power deficit never felt an issue either - this is a rampantly fast car.

So to the C63. It's a bit of a lump, frankly. But a massively charismatic one. It makes no attempt to chase the M3's circuit pace, instead playing to its strengths as an entertainer. And in this it excels. It's the only one you can get as an estate too, which adds considerable appeal.

Leaving the Alfa Romeo, the one with the potential to be a genuinely disruptive influence in this German-dominated sector. By combining the best of what BMW M and AMG do into one glamorously appointed package it really could be the car to set the standard. If only it had worked properly.