AMG makes a 510hp RWD saloon feel an entirely sensible option - is that what we wanted though?

The first real test for the

comes before it's even turned a wheel. In fact, it comes when you first twist the key.

, complex multi-configurable driver modes, engine downsizing - all of this we can cope with. But if it doesn't sound right it's over before it's begun. 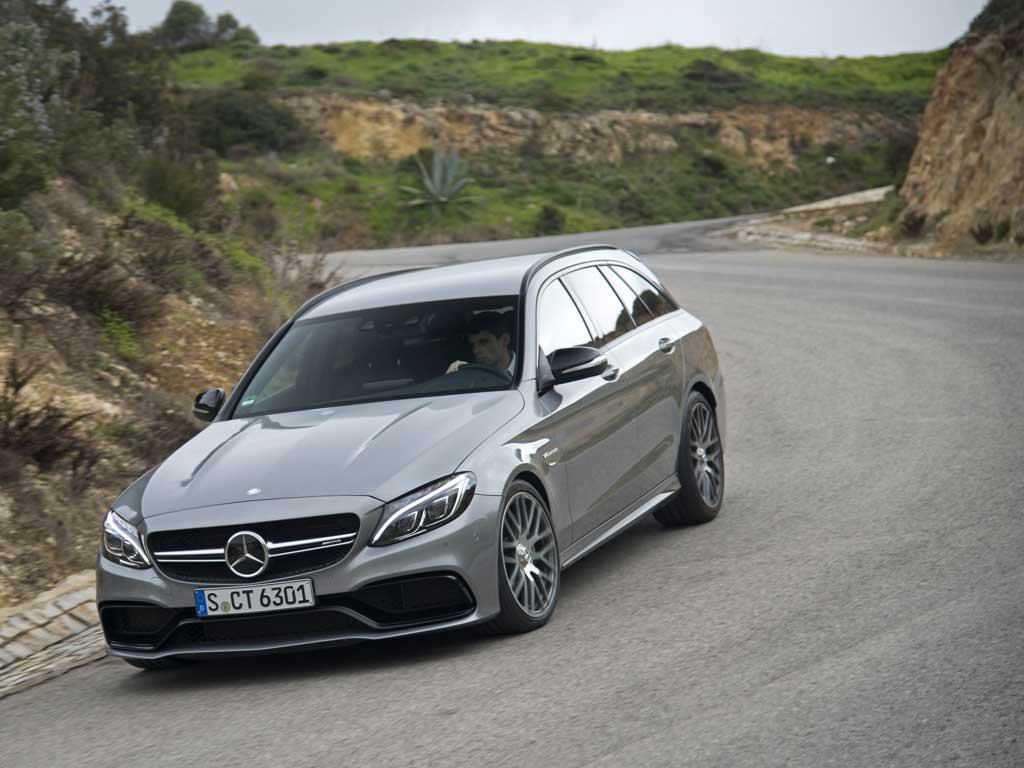 Saloon is cool; wagon is where it's at though

Chu-chu-chu-BOOM! OK, there it is. Refinement in this new C-Class is, of course, excellent. But in AMG's hands bass-led NVH has been turned into a positive attribute that fizzes and tingles from the tips of your fingers to the base of your gut. Suffice to say, it's not coming from the speakers either.

Some stats before we pull away and head to the Portimao circuit where, in a handy coincidence, we first drove the BMW M3 and M4 not that long ago. We'll try and keep this as brief as possible... From a base price of £59,795 in standard 476hp trim the C63 saloon has already landed a pretty hefty blow to the M3's chin. But it's the 510hp punch to the gut of the £66,545 C63 S that'll really leave it reeling. Yes, that's nearly £10K more than the starting price of an M3. But just look at the numbers.

An M3 has 431hp and 406lb ft of torque. And never does it feel anything other than rampant. But even in 'entry-level' form the C63 has 476hp, 479lb ft of torque and the benefit of another litre of cubic capacity, not to mention a couple of extra cylinders. Go all-in and opt for the S and it gets even more serious, 510hp and a frankly ludicrous 516lb ft of torque instantly settling any Top Trumps disputes before they've even started. It's a 'don't even try it son' swagger that has served AMG well over the years, even at the risk of appearing a little one-dimensional.

Yes, it's expensive. But the cachet of sharing an engine with a proper supercar - as the previous C63 did with the SLS - is the kind of emotional appeal that sets the C63 apart. And has ensured AMG C-Classes have been at the heart of the tuning division's range since 1993's C36, its very first official model since being taken in by Mercedes-Benz proper. 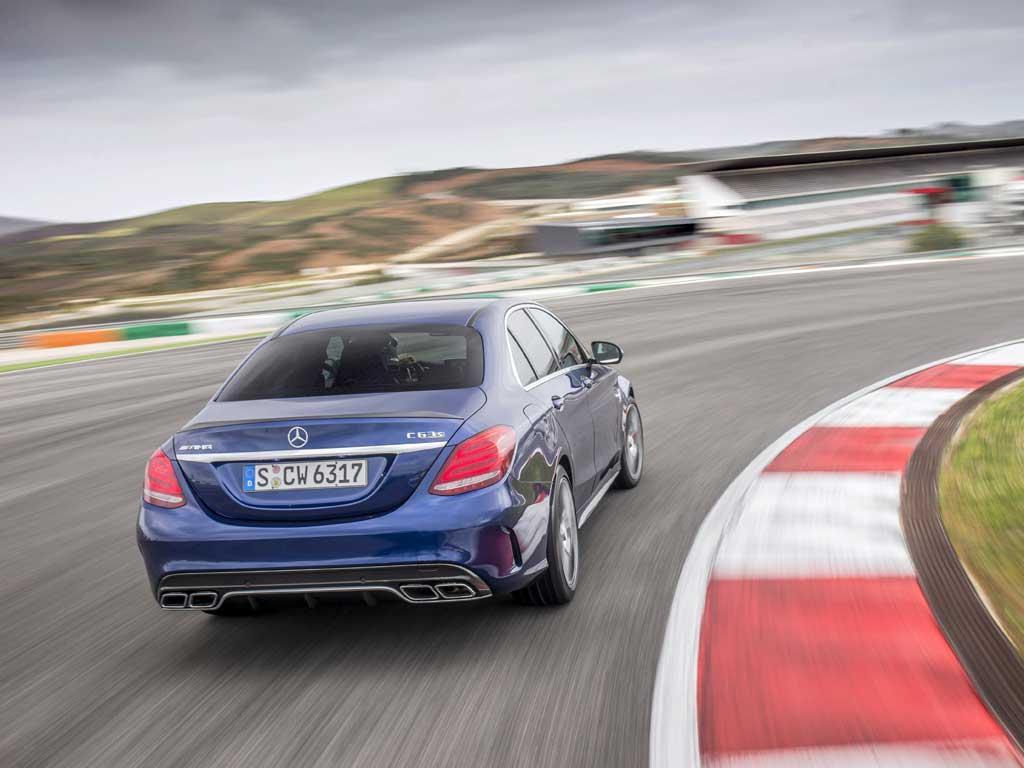 Can it get its power down better than the M3?

Worries for this new-age AMG would centre on its new focus on configurable gizmos and high-tech gadgetry. The W204 generation car was a master of simplicity - sod-off engine, passive dampers, put it into D and let rip. As in the GT though you can't go anywhere in the new C63 without first navigating your way through five driver modes - one a fully configurable combination to mix and match your choice of the other four - before shrugging your shoulders and deciding 'Comfort' is probably the best appetiser for the initial motorway hack.

We've bagged an S Wagon for this first stint, gold calipers behind black wheels revealing a first for an AMG C-Class in the shape of ceramic brakes. A £4,285 option, these can be added to an already impressive standard spec that includes dynamic engine mounts, three-way adjustable dampers, a fully active electronically controlled locking diff and a bunch of other gadgets and gizmos. The only other box you really need consider on the options list is the optional sports exhaust for an additional £1,000.

If the previous C63 was an unreconstructed muscle car first impressions of this new one are that it is ... very refined. And sensible. It rides well. The interior is swoopy and stylish and, yes, has that much derided tablet-style central display. There's bags of kit, it's comfortable and all very, well, Mercedes.

Portuguese motorways are characterised by sudden and vicious bumps and compressions but in comfort mode the dampers gobble them up, vertical movement present but expertly contained with only a hint of secondary undulation. The steering - a linear rack chosen specifically for the 63 - is smooth, positive and well weighted and with the exhaust in quiet mode it wafts along pretty much as smoothly as any well-specced C-Class. 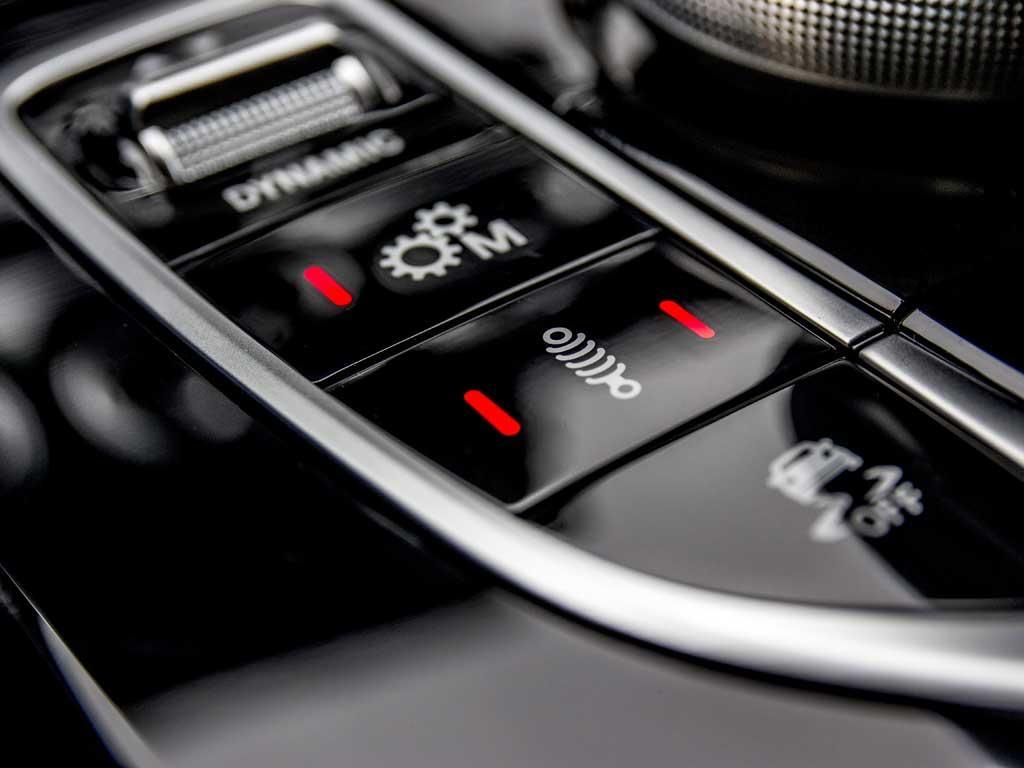 Which is a bit of a worry for those of us fond of the previous car's shameless thuggery. Tinkering with modes and set-up while attempting not to crash into toll booths reveals, varyingly, sharper throttle, more assertive containment of vertical body movements, more engine noise and a greater interest in shuffling around the gearbox's seven ratios for maximum thrust.

As the roads become single carriageway and twisty an Individual mode of comfort dampers but Sport+ engine and gearbox and the more relaxed ESP setting seems appropriate. Before exploring what this inside-out, 'hot-vee' turbocharged V8 is made of.

Discussion with engineers reveals that disguising the forced induction power delivery was a fundamental development goal. Sure enough, while you can feel just a hint of lag and swelling boost when accelerating in a higher gear, in all other scenarios it pulls with a linearity that'll sooth fans of the previous big cube V8.

Given the engine has been cleverly configured to feel like the old one the more fundamental change in character between this and the previous C-Class is the way it puts that power down to the road. Like the GT, the C63 puts a greater emphasis than ever before on traction. An LSD was an option on the old car and very aggressive in operation - great for those ready with the corrective lock, possibly a bit intimidating for everyone else. The non-S car gets a mechanical LSD as standard but the S gets a fully active electronically controlled one and it's this more than anything that transforms the car's character and makes 510hp through the rear wheels feel like an entirely rational proposition. Sure, the ability to neutralise understeer with the throttle is still there and the correction that follows is smooth and well telegraphed through your palms. But where the old car would happily continue the rotation as far as the lock stops would go this new one simply shuffles the power across the rear axle, chomps down into the tarmac and goes, no drama.

But hang on, isn't drama what we likedabout the old car? 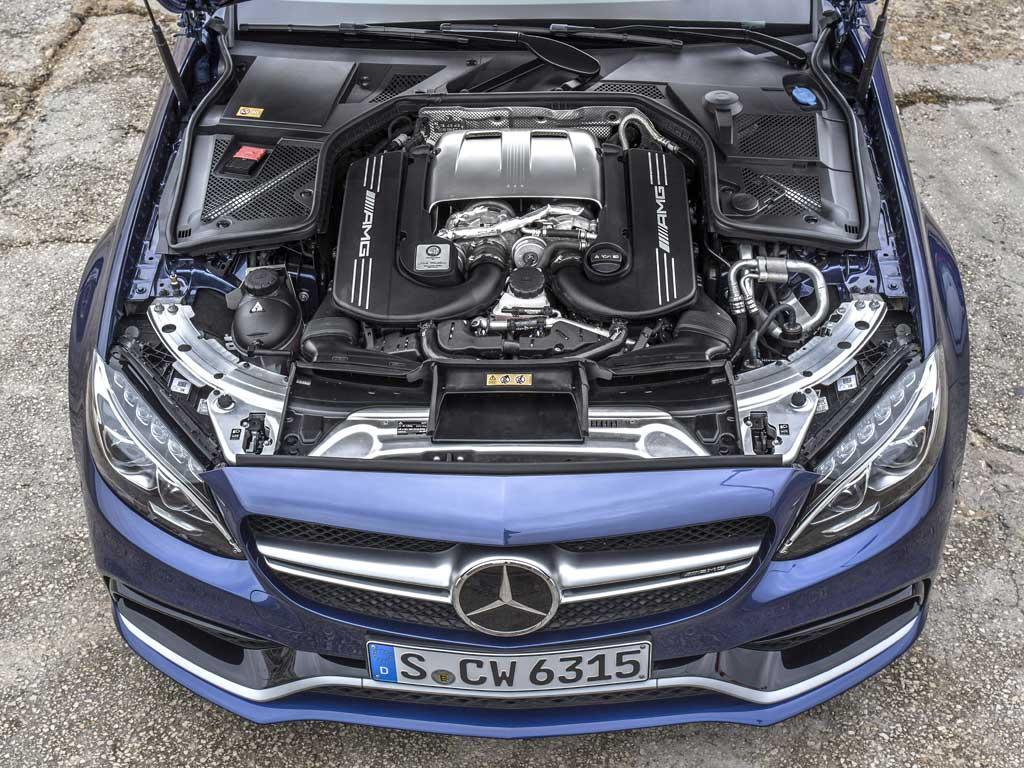 Possibly. Switching to an S saloon for the track work the traction advantage is underlined. It might have a lot more grunt than the M3 but by backing off the torque in the lower gears to avoid overwhelming the rear axle doesn't feel as rampantly oversteery as the figures might suggest. It's also a little softer at the front end, a comforting pillow of understeer awaiting those who push a little too hard, more exciting cornering stances requiring a degree of determination to unleash. Once it does hook up toasted tyres are very much on the menu and it'll happily hold big angles on the throttle. But this isn't its default attitude any more.

Revved out to its soft limiter the engine has a commendably consistent and linear power delivery but, at the extremes, still can't quite compete with the utter mentalism that lurked in the higher reaches of the 507 tune 6.2. It's damned close but the new C63 treads dangerously near to being too clever for its own good, those endearing rough edges smoothed over and gentrified.

At the request of AMG boss Tobias Moers the gearbox engineers have been told to man up and stop being so cautious about supplying downshifts on demand and the familiar auto-plus-clutch seven-speeder is an effective partner with the new V8. It's not as crisp as the M3's optional DCT, or even quite as quick as the better applications of the all-conquering ZF eight-speeder. But it's far from an Achilles' Heel. 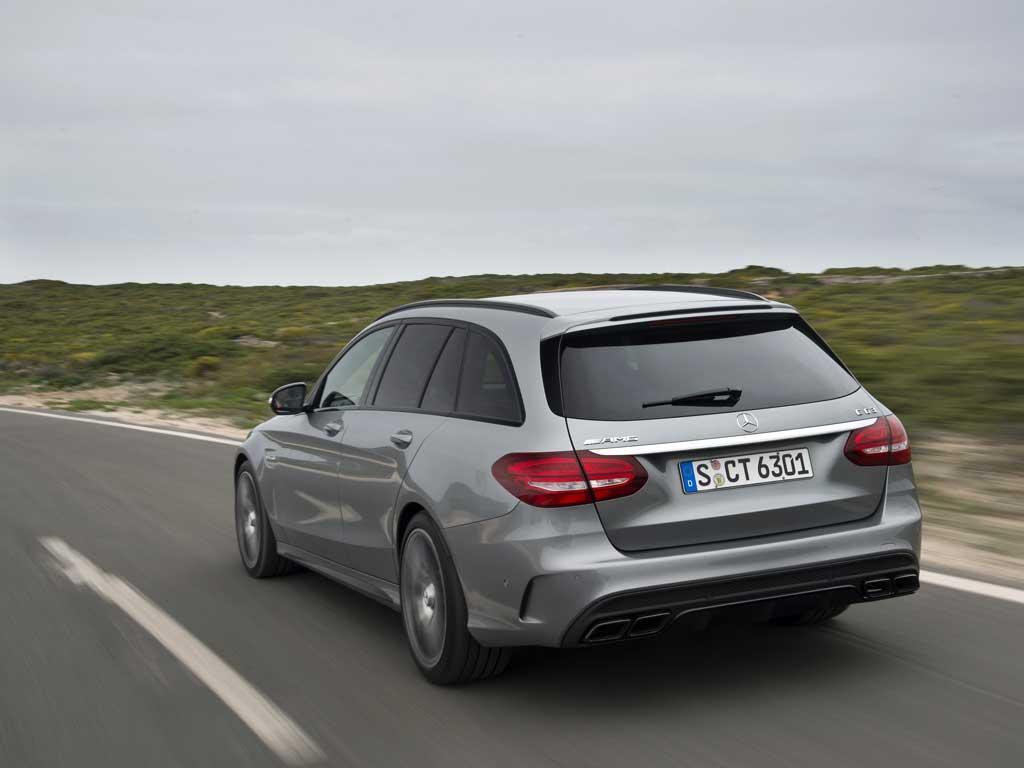 As a road car that works a treat, the C63 a very much more rounded proposition than the M3/M4 and a car you could live with much more readily. It also manages to satisfy at the civilian speeds the BMW seems disinterested in but can't hide the fact it's a little softer at the ragged edge.

We end where we began though, which is to say it's all about the V8 and the authenticity of that sound. It underpins everything, dominates the character of the car without ever overwhelming it. And proves decisively that AMG can adapt the things we've always loved about its cars to the new tech obsessed age. Arguably it's done a better job of this than M, probably because these were seemingly development goals from the off rather than papered over the top of the tech as an apparent afterthought. It might have backed off a little of the sharpness in that final 10 per cent of its performance envelope. But in the 90 per cent in which you spend most of your time it's brimming with confidence, character and sensory delight.