There might not be a better V8, four-door GT than the B8 - but is there a better electric one? 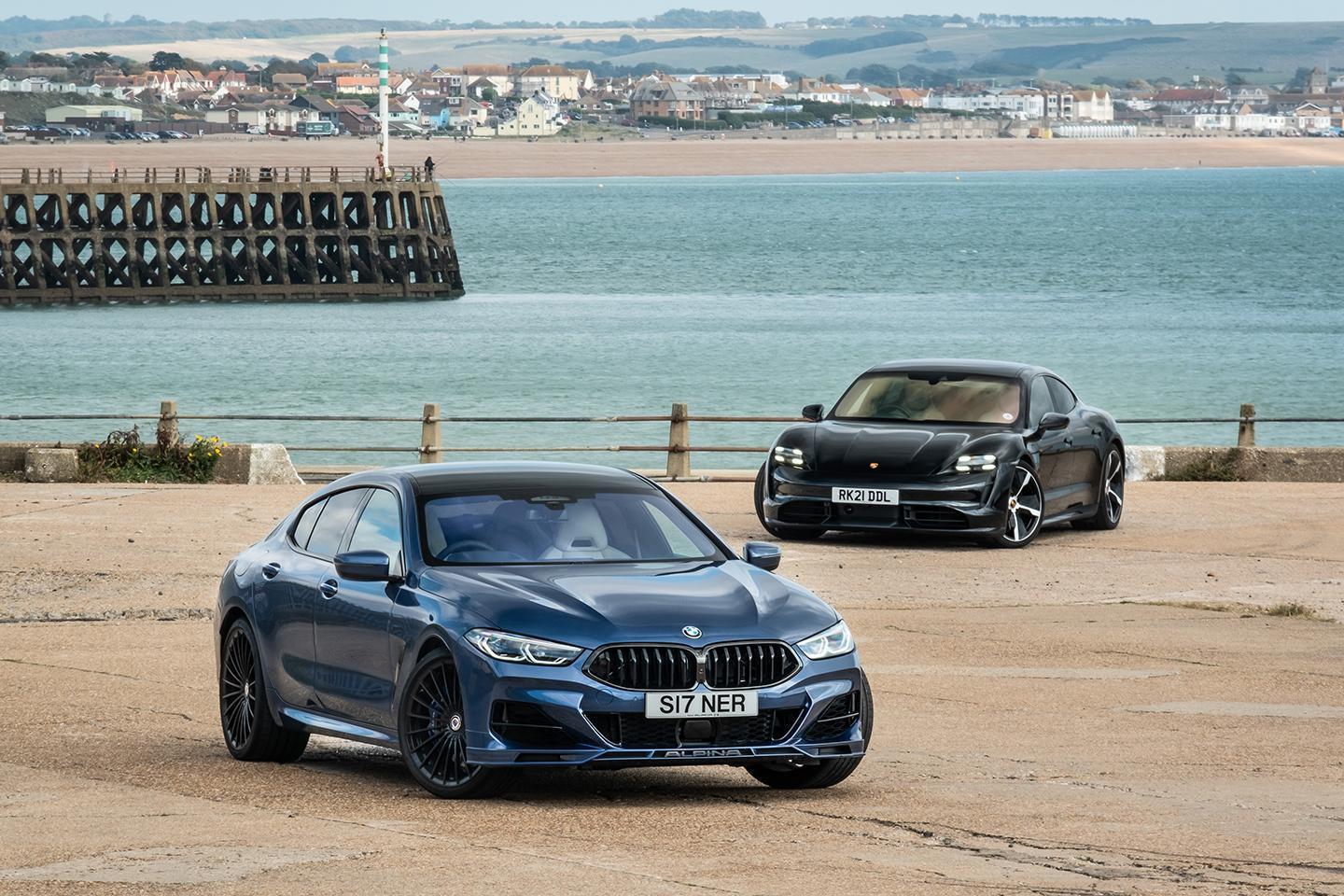 The Grand Tourer has been around for almost as long as the car itself; don't expect its appeal to diminish anytime soon, either. Now as much as a century ago (and presumably for decades to come, too), the attraction of a car that can combine luxury, space, performance and panache is plain to see. Likewise, a car as good to drive as it is to be driven in is a mighty appealing prospect, yet one that's far easier imagined than executed. That's why only the very best manufacturers make them. It's arguable, moreover, that the GT might have more appeal now than at any point in recent history - why bother with an airport when, for a couple of hours more, the car is there for the utmost privacy? And just your own germs...

We're at a crucial juncture for the genre, too. Electricity provides tangible benefits for touring, most notably from a refinement perspective, but also for future viability in urban areas - opera houses aren't often in the suburbs. But a combustion engine, of course, provides the emotional pull and additional range so conspicuously absent with batteries. Ideally in this comparison we'd have a plug-in hybrid as well, something that might be able to provide the best of both worlds, but for now we have the finest of both the old and new schools: an Alpina B8 Gran Coupe, and a Porsche Taycan Turbo.

We'll begin with the Alpina, because it's the newest car here and, well, it's the Buchloe take on BMW's most luxurious car. If ever Alpina's famed approach were to work - offering a more discreet approach to huge performance than an M car - it's going to be on the four-door 8 Series. Note there's never been an Alpina 2 Series, because that car perfectly suits the frenetic nature of an M flagship, and as the 3 Series has grown larger and more mature, so the B3 and D3 offshoots have become ever more attractive. Alpina and an 8 Series ought to be a match made in heaven.

For the 8 Series Gran Coupe, familiar methods have wrought unsurprisingly familiar results - this is a fabulous car. With 620hp and 590lb ft from the 4.4-litre V8, it loses out nothing to the 625hp M8 Competition, but ekes out its advantage in the details; Alpina's exhaust work has created a more authentic sound from the twin-turbocharged engine, its suspension (with new Eibach springs and a Comfort+ mode) is less punishing, its whole attitude - ditching things like the configurable brakes and Drift Mode - just more appropriate for this sort of car. Nobody is going to take a £150k, two-tonne machine on track, so why pretend that they will? Instead, the focus has been on making the 8 Series Gran Coupe better where it's likely to be used - and it shows.

A softer focus makes the B8 a joy on the road; effortless, mellow, and peerlessly refined, but not aloof in a way that might be levelled at the regular M850i - a very neat compromise. An M8 is taut and demanding; the Alpina plush, measured, and more subtly engaging. It isn't simply some big barge with fancy rims and a big V8; the fitment of four-wheel steering (that isn't there in the M car) ensures it's less ponderous than expected, and with additional front axle tweaks the turn into a bend is positive and satisfying. The torque rich V8 and excellent auto complement the driving experience, with the minimum of fuss (there seems no need to configure modes here) and maximum reward for just getting somewhere far away very quickly.

The B8 is more than happy to be driven harder, too, tensing up and hunkering down to take on the next challenge without ever losing its cohesiveness. It's accurate, grippy, supremely fast and balanced in best BMW tradition, Alpina's take on xDrive meaning the Gran Coupe always feels dictated by its rear axle. Drift Mode is not missed. Neither are ceramic brakes. Or two M modes. Or a Track setting...

The Alpina feels most imperious with distance to cover and speed under its wheels, the ride just a tad fidgety at really low speeds, despite the best efforts of Comfort+ or the very clever (and most often used) Adaptive mode; a car that must be settled at 200mph needs to sacrifice something somewhere. At a cruise, there's nowhere you'd rather be, silent apart from a V8 murmur (that's easily roused), surrounded by rich leather and sat in a glorious chair. The dials are a disgrace and the wheel comically chubby, but as proof of where the traditional GT has reached, the Alpina B8 is arguably its finest exponent. There's nowhere you wouldn't want to drive it.

Initially, the Porsche makes the Gran Coupe feel like it's from another century rather than just another manufacturer, seemingly 50cm closer to the ground, 500kg lighter and even faster again. The similar stats on paper belie the Porsche's considerable extra immediacy on the road. The Alpina changes direction impressively; the Porsche scythes through bends seemingly regardless of speed or radius. The B8 piles on speed tirelessly; the Taycan gets to 60mph (and then much faster) like flicking a switch. The big Gran Coupe drives exactly how an Alpina flagship should in 2021, with the ability and swagger we've come to expect over the years; the Taycan drives like a Porsche sports car ought to, but it's battery powered and weighs 2,200kg - it's a phenomenal engineering achievement.

There are clear advantages over the Alpina, too, with greater traction, better body control and more incisive steering. It is fazed by nothing. Great though they are most of the time, however, and excellent for an EV, the Porsche's brakes aren't quite as reassuring - understandable given the balancing act of regen and conventional breaking.

As a true GT, however - rather than merely a supercar-humbling four-door - the Taycan Turbo does have some flaws. Though cool, crisp, and modern, the interior doesn't have quite the feel-good factor of the Alpina, with a few cheaper materials. Which makes some sense, because a Taycan starts at £80,000 and the B8 kicks off at £135,000, but when the car you see here is £131,912, it become a factor. And there's only so far options will get you for sense of occasion.

Perhaps more notable - and more surprising - as a GT is that the petrol Alpina seems no less refined. Wind noise isn't as subdued in the Porsche, offsetting the benefit of silent propulsion, though both do generate some roar from enormous Pirellis. To the human ear, the Taycan is louder at a cruise. Combine that with a ride that's never quite as supple as the B8's and, for covering distance, the Porsche's seat - however much lower and sportier - isn't the one to pick. Before even thinking about range.

That the Alpina can combine impeccable cruising manners with the sensory appeal of the big V8 - the sound is a tad synthetic but recognisably V8, and the feeling of huge power building never gets old - makes it little short of compelling. Plus it reveals a chink or two in the seemingly impenetrable Taycan armour. Even with two more doors than the strict definition of a GT, the B8 is an epic grand tourer. Hundreds of miles a day would be a task to cherish, and owners are set to enjoy one of the great long-distance cars.

Be in no doubt, however: the Porsche really isn't far behind. Much as it was for the Giulia comparison last year, the Taycan has taken the fight with a petrol-powered class leader (now in a different sector) and given a superb account of itself. It's arguably the more stylish car against the slightly fussy Gran Coupe, devours any road in any weather and will cruise with aplomb for as long as 83.7kWh will sustain you. Which, of course, does somewhat count against the Porsche as a grand touring prospect.

With infrastructure progress charging along (pun very much intended), that won't be the case forever; a proper (and revealing) test of these cars' credentials across counties - and maybe the continent - shouldn't be very far off. That will be a proper grand touring assessment. For the moment, however, the timelessly appealing GT formula is best served by a time-honoured recipe: give Alpina a big BMW and a big budget, then sit back and enjoy. It's impossible not to.