Would you buy a diesel powered Audi RS, BMW M-car or Merc AMG? Our instant response would have been 'no, are you mad?', but a drive of an RS5 TDI prototype has prompted some back-pedalling. 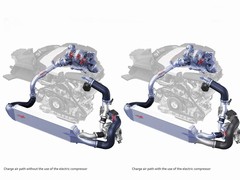 Audi has embraced the black pump more wholeheartedly than its German rivals, and while that's great for the CO2-concious fleet customers that make up half of its UK sales, it has struggled to make diesel sexy, even with all those TDI Le Mans wins.

The RS5 TDI is a serious attempt bash away some of those 'weekday diesel, weekend petrol' prejudices. So serious in fact that we were told by Audi's head of engineering, Ulrich Hackenberg, that there was a good chance it will be built.

Back in black
The car uses the same three-litre V6, twin-turbo TDI as used in the SQ5 but with the addition of an electric compressor to boost power from 313hp to 385hp. That's not far of the 450hp made by the V8 petrol RS5 but the diesel's peak torque of 553lb ft soundly beats the petrol car's 317lb ft. Audi claims a 0-62 time of around four seconds for the concept, compared to 4.5 for the standard petrol. 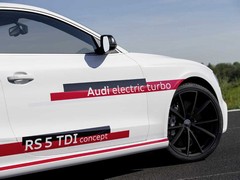 The big jump is thanks to what will inevitably be called an electric turbo, but is really an electric compressor (or e-booster in Audi speak) that forces air to spin up the first of the two turbos. This happens in milliseconds according to Audi, and accounts for the fact that peak torque is now as low as 1,250rpm.

It brings a new definition of 'zero turbo lag'. We drove the concept briefly round a small track in Sweden (Sturup, near Malmo if anyone's interested) and the chief memory is one of truly addictive, medicine-ball-to-the-head acceleration. Audi supplied an RS6 Avant (0-62, 3.9 seconds) for short drag races and the TDI kept up until 50mph or so.

Anti lag
The car was fitted with an eight-speed slushbox with paddle shifters instead of the seven-speed dual-clutch in the V8 RS5 and flicking through the gears gave another demonstration of the power stab of the electric compressor, particularly when you lost revs. It essentially overcomes the extra weight of the TDI engine to get the revs up. Having eight speeds also meant there was somewhere to go when the lower redline was reached. 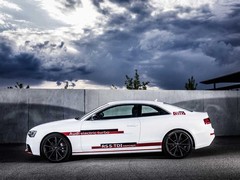 That extra weight, not just of the strengthened engine block, but also the flywheel and the stronger pistons and con-rods, is one drawback to getting diesels mentioned in the same breath as performance petrols. It takes more force to get them spinning and, if you come off the gas, the revs fall away more slowly. It's impossible to see diesel motors in track day weapons for example.

Then there's the noise. You knew we'd get there eventually. Audi has really worked on this aspect and the result here is admirable, if a little weird at times. All the work going into making TDIs more refined, driveable and economical, such as more pilot injections into the cylinder courtesy of ever higher fuel-rail pressure, is also making them quieter, so it was inevitable this was going to be synthetic.

Sound ideas
Essentially there are three different noises. The first you hear standing near the bonnet is a very unpromising diesel chug. This is real. The second you hear again from the outside when the car is driving away. This is a lot better, a growly burbly petrol-aping menace that is actually generated from a vibrating speaker within the exhaust pipe. The third is what you hear from within the car and it's gravellier noise that's no less appealing but references the diesel under the bonnet a bit better. This is synthesised and emanates from the car's interior speakers to exact match the revs. As a backdrop to pedal-down driving, it all sounds appropriate. 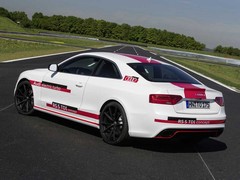 The future of lag-free turbodiesels?

We love that electric turbo (sorry, compressor) though. We'll first see it an SQ7 version of the new Q7 SUV that's coming next year, according to Hackenberg. It's not cheap, because that compressor also requires a 48-volt electric system to run alongside the standard 12v. Essentially it's a mild-hybrid because a small motor-generator also feeds captured energy back into a small lithium ion battery that can also run other electric gadgets. One suggested was an electric chassis control system.

The RS5 TDI won't arrive until after the new A4 is launched next year with the new longitudinal engined architecture, but when it does finally come as we expect it to, it'll be a tempting choice for those who want their weekend plaything to also fulfill dull weekday duties with MPG averaging into the thirties rather than 20 on a good day.

Diesel cars for the end times | Six of the Best