If you know Lotus you'll know Roger Becker, the firm's legendary chassis engineer and occasional stand-in Bond stunt driver. Becker worked at Lotus for over four decades, retiring in 2010 having made his mark on every Lotus built in that period.

The Becker influence on the way Lotuses ride and steer has been maintained, son Matt following family tradition and now bearing proudly bearing the job title Chief Engineer - Vehicle Attributes. Suffice to say, Matt knows a thing or two about what makes a Lotus a Lotus but until recently he'd never driven an early Esprit like the one his dad helped develop and, by a quirk of fate, drove for the famous pre-aquatic section of the car chase in The Spy Who Loved Me.

The Top Gear special on Bond cars in which Becker senior recounted that tale meant sourcing a mint S1 for Richard Hammond to drive. Freshly restored, Lotus was asked to shake down the car featured to make sure it was as it should be, gifting Matt Becker his first proper go in a S1 Esprit. Speaking exclusively to PH, here are his thoughts... 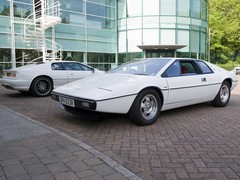 How did the drive in the Esprit come about?

"Top Gear was filming a James Bond special and had asked Lotus to source a replica 1976 S1 Esprit for Richard Hammond to drive. As it happened a private collector Constantine Herodotou, had acquired the very next white Esprit off the line after the original Bond car and had commissioned a full restoration including a brand new interior. Our PR team asked if I could drive the replica to see if I thought the preparation and performance were good enough for it to be used by Hammond. I am not an expert on the Esprit S1, in fact this was my first opportunity to drive one properly on either road or track! Needless to day I had to be a little cautious as the car was still being run in and a lot of time, effort and care had been put into restoring it. I did not want to be the person to break it!"

So what was it like to drive?
"I have driven many Esprits in my 23 years at Lotus - mainly from the S4 onward so cars of the mid 90s. To be honest I think the S4 is still the best Esprit for balance of performance, weight and dynamics. I had never had the opportunity to drive an S1 before, for some reason this special car and I had never made contact." 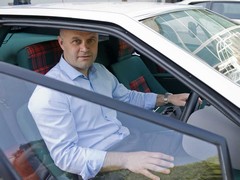 Matt Becker gets acquainted with the S1

How did it compare with those later Esprits with which you're more familiar?

"As canny as it sounds, I could instantly recognise it as a Lotus. It has such a supple feel to the ride, and when I say 'supple' I don't mean 'soft', it has a nice compliance, balanced and a refined feel to the ride. If you imagine a horizontal line along the middle of a moving car, a Lotus will always breathe in an equal direction either side of this line. We use the word breathe as that is exactly what the car is doing, never over constrained or over directed in one direction, up or down. The S1 demonstrated this to perfection. The handling was very progressive, never surprising the driver with any sudden loss of grip at either end.

"The grip levels are very low compared to modern cars but this does mean you can have a lot of fun at lower speeds - maybe there is a message in there! The steering talked to you in the typical Lotus way; full of connection and information but, importantly, the right information. We have a saying that a Lotus's steering must always 'with a given input, give the expected output' and be linear in both effort and response with no sudden surprises. The rate of steering angle increase must always match the rate of body roll increase." 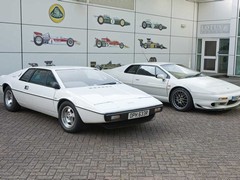 How have things moved on?

"Well, there were a few things which struck me as feeling old. The ergonomics - particularly the angle of the steering column towards the side window - did not allow for even arm lengths when driving, the pedal area was very tight, as was the pedal spacing and the relation between the throttle pedal height and the brake was not as we would set it up now. It made heel and toe quite difficult - a considered shoe selection is required when driving an S1!

"The other interesting feature was the very low structural feel of the chassis. In current times the torsional stiffness of the Esprit S1 chassis is roughly a 10th of what is now considered a starting point. I spoke to Richard Rackham, the man responsible for creating all Lotus structures since the early 90s from improvements to some of the early Esprit race cars through to the creation of the structures for the Elise, Evora and the original AML Vanquish. He mentioned that in his early days working with my father that they took early Esprits and modified the structures to increase torsional stiffness and kept feeling improvements in dynamics performance - this is a given now. Today we know how fundamental high levels of torsional/bending and hardpoint stiffness are to delivering excellent dynamics and NVH performance, but seemingly in the earlier days this was not always recognised. If you consider that an Elise is four times stiffer than an Esprit S1 and that the Evora is 2.5 times stiffer than the Elise, you can see how this has evolved." 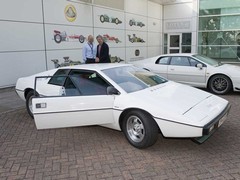 You must have been pretty chuffed to know it was your dad driving the Esprit in The Spy Who Loved Me...

"I can still remember when my father left home for six weeks to go to Sardinia. I was around six years old and I did not really understand what he was doing at the time but as I got older I realised what he had been up to - I have to say it is pretty incredible to have had that opportunity to drive not only in such an iconic film, but in such an iconic car! He has some very good photos of himself with Roger Moore, Richard Keil and Barbara Bach during filming. He also has pictures of the helicopter and wet bikes - from what I see it looked a lot of fun. I question how much work was involved when you see the pictures of them messing about on set!"