Home/Features/Features/Drones - the future of racing?

Drones - the future of racing?

All the adrenaline without any of the risk

Talk of Roborace becoming a feature on the motorsport calendar is something that causes concern amongst many a petrolhead. I for one am all for pushing the boundaries of technology, but you need look no further than last weekend's Baku Grand Prix to see why taking the human element out racing defeats its very nature. No robot will ever take it upon itself to go for a gap that isn't really there, or get a little too hot under the collar when things don't go its way. Unless it's programmed too of course, and then what's the point? But for those of us who don't consider ourselves Luddites, yet fear that automated racing will diminish the sport, there could be an answer. Drones. 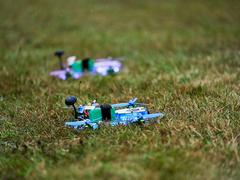 Although drone racing may currently seem little more than a hobby, akin to flying remote control airplanes or playing with RC cars, it is rapidly becoming big business. Many of the racers have come from high adrenaline, high-risk sports like Baja and MotoCross. Conrad Miller, one of the leading race drone pilots in the world says that when he first got into the sport, riding motocross bikes began to seem pointless. His son also races drones and is most likely to take his dad's crown very soon. To truly understand just how serious the upper echelons are, look no further than the £16m of investment that the Drone Racing League recently received. The name of the biggest investor may ring a bell too... Liberty Media.

Joe Egusquiza, a man with a name matched only in its stature by his incredible beard, is Director of Business Operations at Thrust UAV. He has a terrific passion for the sport, which he compares to playing Xbox on steroids, and is part of a project aiming to get school kids excited about science and engineering through drones. The race drones that the professionals use are a far cry from what those school children will be assembling though. Thrust UAV's own Riot 250R Pro is the remote controlled F1 car of the skies, built with the best components, possessed with incredible acceleration and able to deal with the intense amounts of G-force it endures through the mind-blowingly sharp turns it is capable of. 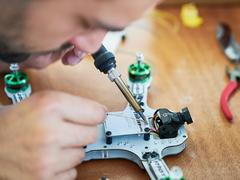 The experience of piloting a racing a drone is a unique one. Components like the controller may be familiar to an RC car driver, but here there is the added difficulty of adjusting for pitch and yaw. Simple, you may think, but the Riot 250R is capable of 0-60mph in around 1.5 seconds, with a top speed in excess of 100mph. Add into the mix the fact that the drone is controlled from a first person view via a VR headset, and it quickly becomes far trickier than you think. This drone's-eye-view allows the operator not only to see what the drone sees, but to genuinely feel the surge of acceleration as they zip through the next gate, or the rush of adrenaline as they pass millimetres from the trees, at what would be license losing speeds in a car. I, of course, had to have a go. So with some practice time on the simulator under my belt, and the mandatory Top Gun quotes out of the way, my cocky self thought I was ready to try out the real thing. Oh, how wrong I was.

What first surprises you when piloting a drone, isn't what you can see, but what you can't. Generally, when getting used to a controller, it's useful to see your hand movements to understand how much input is needed to accelerate and turn. But when the headset is on, you can only see what the drone sees, which is incredibly disorientating. Add to that the hummingbird-like reflexes of the drone, and you have an immensely steep learning curve. I would like to say I got the hang of it after a few runs, but there were still several instances when the pros I was remotely tethered to had to take over. Even after such a brief stint with the drone though, the adrenaline rush felt as if I had been piloting it first hand, despite never having left my chair, and I was aching for another hit.

So if you are down at the Goodwood Festival of Speed this weekend, be sure to check out the racing at the golf course. It may be in its infancy, but for drone racing the sky is quite literally the limit.