Shorn of the GT spec or Circuit Pack, just how good are the all-conquering Civic and Yaris? 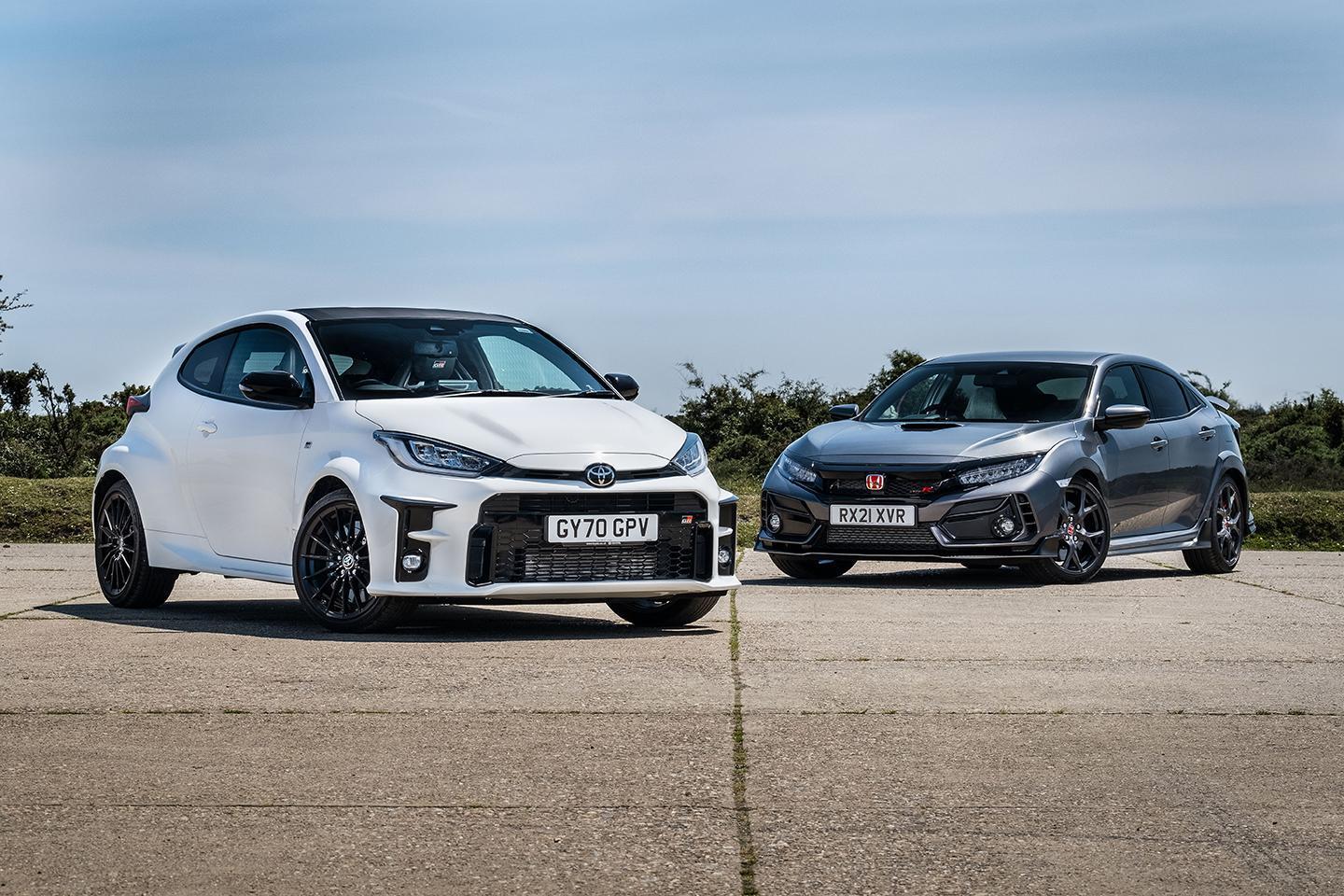 Everyone loves a Q-car, don't they? Speak softly and carry a big stick plays well to the British spirit of diffidence and almost painful modesty. We don't like to shout about our achievements - an attitude perfectly suited to unassuming yet powerful cars.

And while that fondness has resulted in many a great under-the-radar performance car from Britain over the years - fast Jaguars, most notably - there have been plenty worthy of note from Japan as well. Where else could have produced a Spec D Subaru Impreza, where the D stood for Discreet Specification? Or a Nissan GT-R Gentleman Edition? Let's not forget the Mazda Performance Series, either; the original 3 and 6 MPS were so subtle that you could very easily not notice them, even if you owned one. Toyota bade farewell to the Corolla in the UK with a 215hp supercharged engine they usually gave to Lotus, but it might have easily passed for a diesel runabout. A car culture famous for wild tuning exploits notwithstanding, the Japanese mainstream have made more than a few great Qs.

The Honda Civic Type R Sport Line aims to be another, and a rather better hot hatch than cars like the 3 MPS and Corolla T Sport Compressor. It might also be argued that this is just Honda's response to a, er, less than universally positive reaction to the looks of the standard FK8 Type R. But that's by the by - cult heroes have resulted from less auspicious beginnings.

So why is the GR Yaris here? Hard to call it a Q-car precisely (although it rarely draws a second look from the uninformed masses) but if you look closely you'll notice this one isn't wearing the forged wheels, and doesn't have parking sensors either. This is a GR without either a Convenience Pack or a Circuit Pack - the Yaris you'll actually get in exchange for £30,000. In theory then, we have the black sheep of their respective families - the rally-inspired Yaris without the motorsport goodies, and a grey Civic without the big wheels or ginormous wing. Are they lesser derivatives in stellar hot hatch line ups? Or might less actually be more when it comes to GR Yaris and Civic Type R?

Truthfully no example of this Civic generation is a shrinking violet; even a 1.5 Sport gets twin exhausts poking out beneath the numberplate, a spoiler at the bottom and the top of rear screen and the angular front end. Even the Sport Line retains the vortex generator, trio of pipes and bonnet scoop. But that doesn't prevent it from being much more demure - and possibly slightly conflicted as a result. A Type R GT leaves you in no doubt as to its intentions; the mixed messages here - not subtle enough to be invisible, not sporty enough to be exciting - may not be to all tastes. That said it garnered far less attention than our long-term test car, which is anecdotal evidence at least that the trim level is doing a better job of fitting in.

Certainly parked up next to the hype-laden Yaris, it fades into the background. Having not driven one since a dark and dank December, a GR in the sunshine is a sight to behold, even in chest freezer white and with the standard wheels. More so than any spec of Type R, it exudes attitude without trying too hard; the stance is perfect, the wheel arches plain rude, the intent clear from every bespoke panel. But there's no towering spoiler, drainpipe exhaust or gratuitous intake. You look at the Civic and imagine how it be improved with this removed or that added on; you look at the Yaris and wonder if any hot hatch ever looked more right, or ever will again. Maybe a red one. With the Circuit Pack...

Enough has been written about the GR interior - the seat is too high, an actual co-driver might be wise given the visibility and there's not much space at all - that we can skip straight to the driving. Because that's absolutely worth enduring any inconvenience; Litchfield can do you a better mount and seat, after all, which improves visibility as well. And this is still just a Yaris, now with trick four-wheel drive underneath - of course there won't be much room in it.

That the Yaris Starter Pack is still such riotously good entertainment says a lot about the innate brilliance of the car - the GR doesn't require a carefully cultivated option bundle to get the best from it. On the road, at least; presumably the Circuit Pack would make its benefit known on track, though this one is no lesser sibling on the public highway.

It's like driving a party popper. At any given moment, the GR Yaris is a tiny explosion of excitement imploring you to have a good time. The 1.6-litre three-cylinder, even in this company, is just superb, responsive as an engine of this specific output has no right to be and with a similarly voracious appetite for revs. It feels motorsport-inspired in a way the Civic can't quite match, and must be just as fast.

On warm, dry tarmac, there'll be no real assessment of the GR's bespoke four-wheel drive system regardless of Normal, Sport or Track mode. As recompense, you get boundless agility, assured, expensive damping, great steering and the sense of mischief that can only come from driving something this small and this powerful. The Yaris could hardly be better built for driving in the British countryside. You'll see in the pictures a little bit of roll - and perhaps this is the most notable facet of the non-Circuit Pack car - but it's still perfectly judged to help you gauge what the car is doing, and helps no end with a sense of involvement at road speed. That the light, direct steering is perfectly matched to how the whole car responds (i.e., quickly but not flightily) only aids that impression. Whatever the Yaris is doing, the driver feels part of it - even perched a little too high.

Maybe, just maybe, there's slightly less urgency here to get into a bend than the Circuit Pack car. Memory suggests the Michelin Pilot Sport 4S tyres (instead of the Dunlop Sport Maxx fitted here) may just have dug in a little harder, a little sooner. Similarly, on the exit of bends, this Yaris seemed to rely a little more on the assists to claw it away than it did with the optional diffs equipped. That it's hard to be definitive though shows how close the two GRs are, and how unimportant, really, that assessment is. To drive a Yaris in any specification is to love it, and to be entertained for a very long time to come.

So what of the Civic? From a purist perspective, it's the heavier, more expensive car without motorsport breeding. It shouldn't really stand up to the comparison; though anyone who really thought that hasn't been paying enough attention to this generation of Type R. The Sport Line, contentious though it'll probably sound, might be the best variant ever, and is absolutely worth pitching against the Yaris. Though plenty of great hot hatches are out there at the moment, the best two are undoubtedly from Japan.

The Sport Line might be the best simply because a smaller wheel has done nothing but improve the Civic experience. The tyres - now a Michelin Pilot Sport 4S for the 19-inch rim, instead of the Continental SportContact 6s on the 20 - are the same width, at a 245-section, meaning the unfeasibly good traction for a 320hp FWD car is retained. Otherwise the benefits are much as could be predicted, with a more supple ride and steering that's shed some unnecessary heft - but none of the laser guided accuracy or laudable resistance to torque steer. What's been created here is a car that, to all intents and purposes, drives with all the effervescence and quality of a Civic Type R, yet rides and steers better and attracts less unwanted attention. And costs less money. Like the Yaris Circuit Pack, perhaps the benefits of the Civic GT will be easier to identify on circuit, though that seems less likely for the Honda given the how minor the changes are. The Sport Line really does feel like a win-win option.

Consequently, the differences between the two never stop fascinating; the Civic's feels like the best manual gearbox in a hatchback ever, until trying the Yaris (ultimately the Honda's is that smidgeon slicker and more satisfying); the Type R engine feels like a paragon of turbocharged excellence, until feeling the GR rip around to nearly 7,500rpm with apparently no inertia whatsoever; the Yaris brakes are brilliantly powerful and feelsome - the Honda's probably more so. They're both expertly honed driver's cars, a joy to use at any speed, time, or place - and they cost the same as an Audi Q3. Across a road, the GR's size, weight, and four-wheel drive probably make it a tad faster; feeling the Civic's differential carve a line out might be more enjoyable. The smaller Toyota has the initial agility that the larger, longer Civic trades for great stability at high speed. The GR sounds more tuneful; the Type R might still be a tad quicker...

You can see how it went. Both are fabulous cars: absorbing, enthralling and a real pleasure to drive. Far from being the weak trim link, they might be the best of their respective ranges for the road. Ultimately the buying decision will come down to personal circumstances as much as anything, as the Yaris is really best treated as a two-seater - both rear bench and boot are pretty small. The Civic, on the other hand, is cavernous, able to take four people and their stuff with ease - and look much, much less enticing in the process. If the Yaris GR feels the more special product, as far removed from any Yaris - any Toyota, really - as it's possible to be, then the Civic might be the greater achievement for being damn near as good to drive and a whole lot more practical. Maybe the Toyota is the car for the hot hatch fan without any commitments or obligations, the Civic there for the day a few years down the line when something bigger is required. In their respective classes, both are as good as a hot hatch gets.