Can British minimalism compete with the German tech onslaught?

So you've made it. Well done you. You've progressed through hot hatches, a Japanese rally rep or two, maybe an M3 or an AMG and your first Porsche 911. Now budget permits the next step. But is a

the pinnacle of the 'average' fast car ladder? Or the last stop on the line? Because beyond this you're into proper supercars, and all the good and bad that comes with that. 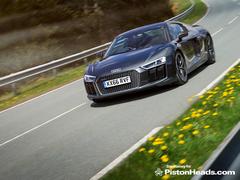 Into this gap comes the McLaren Sports Series, here represented by the

. Carbon of tub, wacky of door and with a properly exotic badge, it represents a different world from that inhabited by the 911 Turbo or R8. And yet McLaren has priced it within reach of buyers of both.

Neither Audi nor Porsche is going to take this lying down though. A McLaren has an easy job impressing in isolation; here it's got a tougher challenge. It's the most expensive, it's lightest but the least powerful on paper and it lacks many of the technical bells and whistles the German cars boast as standard. Its breeding and focus may appeal to purists, but in this context it's got to argue that paying more for less is a stretch worth making.

Given these are road-optimised cars the focus for our test was a combination of boring motorway miles and then the wide open spaces of North Wales. The kind of weekend away usage you might reasonably expect them to excel at. Although none of them is especially track oriented we did ... accidentally end up on Anglesey Circuit too. Y'know, just out of curiosity and all that. Very interesting it proved too.

There's nothing ordinary about a Miami Blue 911 Turbo S or a sinister grey Audi R8 V10 Plus with carbon trimmings. But

looks incredibly exotic. Sleek at a standstill, on the move the 570GT just looks so flat, so fast, so ... supercar. And when you pull up and the dihedral doors open, taking a chunk of sill with them, it makes you feel a million quid's worth. Or, to be precise, just shy of £180K as optioned. 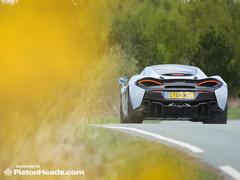 Before yours truly got

busy with the options

the starting price was £155,755, against £145,540 for the 911 and a relatively reasonable sounding £138,330 for the Audi. Not a huge margin in this sector, but you could sling a few choice options at both Germans before hitting the basic list of the McLaren.

If you're all about the drive you'll consider it money well spent though. The distance your bum falls before connecting with the seat base, the need to swing your legs over the sill and the stretched out seating position once settled are all proper supercar. The unadorned wheel is a visual metaphor for how the GT drives too. No gimmicks, no confusing modes or technology. Just real feedback. And speed. Lots and lots of speed.

The engine is arguably the least exciting in sound (at least for the driver) and its old-school turbo delivery contrasts with the 'Dynamic Boost' enhanced delivery of the Porsche and soaring revs of the Audi's V10. But it gets the job done and the forced induction rush is thrilling, opportunity to rev it out to 8,000rpm limited on the road. But nice to know it's there if needed. 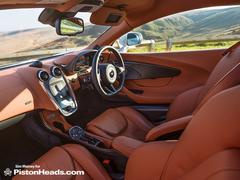 There's a refreshing simplicity to the way it tackles the sweeping Welsh roads too. The three stages on Handling and Powertrain are easy to understand, Sport and Sport about right for most roads with more damper support to stop the nose from grinding out through compressions and quicker manual shifts. The open diff and Brake Steer combination works harder than you might initially think, its background presence doing more to get the power down than first impressions suggest. The weight of the steering, the firm push required on the brake pedal, the intimacy with the tarmac through the amazing visibility - it's all richly interactive with no filtration. Tyre roar, that minimalist cockpit and the lack of gadgets count against it on the motorway transfer sections but, as a driving machine with a sense of occasion, the McLaren sets a very, very high bar.

About as philosophically different from the McLaren as it's possible to get, the Turbo S packs all-wheel drive, four-wheel steering, active engine mounts, torque vectoring, active roll control, variable aero and a host more tech into a package as familiar as it is practical. Yes, those extra seats really will count for a lot of buyers. Likewise the relative anonymity. Well, so long as you don't choose Miami Blue. 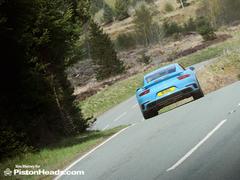 This seems a more GT3-like shade, the idea of an understated colour on a Turbo the more appealing given quite how ridiculous its performance is. The novelty of the Launch Control never wore off on the shoot, the proper face-bending lunacy of sub-three to 62mph a facet of its performance you can actually appreciate in daily use. Well, if you're a bit of a masochist - it is pretty brutal!

Gimmick or not even on a warm, dry road Launch Control demonstrates quite how clever the Porsche's drivetrain is. There's a sense of chunks being ripped out of the road and just enough movement around the chassis as the overboosted 553lb ft of torque is divided up to where it can work best, meaning it's not just a point and squirt exercise. This is a neat analogy for the whole driving experience in fact. 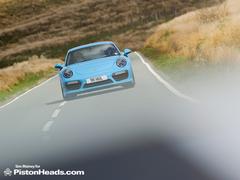 Previous Turbos were just that - point and squirt. This latest 991

has real character though

, from the savage 'whump!' of boost on flat upshifts to the feedback that comes through the wheel and seat of your pants. As in that launch control demo, it never threatens to veer off line. But nor is it inert or boring, subtle weight shifts and tugs of torque to individual wheels apparent even through that huge array of electronic systems.

On our brief foray onto Anglesey Circuit the Turbo S is supreme too. It's a formidable straight-line hero, obviously. But it's also playful and adjustable, tucking its nose in on a trailed brake and then exiting diagonally on full throttle with just a hint of opposite lock. By heck are you going some when this happens though. Oddly on this circuit the McLaren feels out of its depth, steering that feels sharp and responsive on the road suddenly a little slow-witted, the Brake Steer unable to compete with the diffs, all-wheel drive and torque vectoring of the Porsche. Which feels like it could do this all day. And then mooch back down the motorway like a true GT.

Despite these impressive showings it's looking good for the Audi. Best engine in terms of noise, response and character by a country mile. Cheapest starting price. And the most impressive headline power output. Best race pedigree too, given the recent win at the N24, repeating a feat achieved by the LMS version in its debut race just 10 weeks after sharing a Geneva unveiling with the road car. 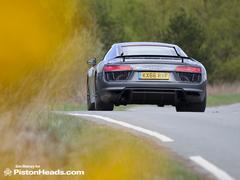 It's not lacking in standard kit either. All-wheel drive, ceramic brakes, driver modes galore and further options of adjustable magnetic dampers, variable ratio steering and an even louder exhaust bundled into one tempting £3,500 Sport Plus package (albeit not fitted to our test car). The R8 is another car that, in isolation, has no difficulty convincing you it's the best thing you've driven. Ever. Unless you've just got out of a McLaren 570GT or a Porsche 911 Turbo S.

A seating position that feels more Audi TT than Audi supercar is the first disappointment. Rather than cocooned like the McLaren or with your eyes just about level with the window sill as they are on the 911 you feel perched and unstable in the seat, first response when getting in always to try and adjust it further down and cursing when you realise you can't.

Then there's the wild array of switches and buttons on the steering wheel, matched with some disappointingly flimsy gearshift paddles. The Porsche isn't much better here but at least they're metal; the McLaren's long blades are much more like it, even if they're an optional extra as part of the interior carbon package. In its initial movement the Audi's steering just feels a bit floppy and inert too. Which is not what you want in a car eager to go quite this quickly. 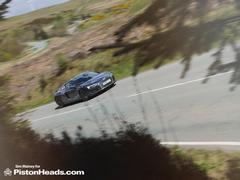 It's an odd mish-mash too. The damping is sublime, the throttle response and noise it unleashes a class apart from the two turbocharged cars and the feel-good factors of being in it, being seen in it and enjoying its more extroverted character traits addictive. But for all those modes there isn't one that satisfies the keen driver like the purity of the McLaren or relentless pace of the Porsche. The Dry mode on the Performance setting of the Audi Drive Select comes closest with its locked-out iteration of the variable ratio steering, if fitted. If you never go beyond seven tenths you'll be completely blown away, and it's certainly capable of everything from mooching to madness. But it just never quite feels like it's letting you fully in on the fun.

That a car as good as the R8 can come a relatively distant third in this company sounds unfair. But the Porsche equals its everyday usability and all-weather dependability. And the McLaren beats it for supercar glamour, despite its engine lacking the charisma of the R8's V10. We've

of the R8 but it just needs the courage of its convictions and confidence in its fundamental qualities, rather than reliance on an electronic smokescreen.

Porsche or McLaren then? Much harder to call. In the Turbo S the complexity and technical hardware isn't a smokescreen, it's an enabler. And Porsche has learned from previous Turbos how to inject a bit more character too. Sure, it's no oil painting. But even in a multi-supercar fleet you could happily argue a case for a 911 Turbo as the everyday ride, especially one in a more subdued colour.

Flat-sounding engine aside the McLaren is the best car to drive and the most rewarding in terms of its looks, atmosphere and image. It genuinely feels like a car from the next class up, its fixation with detail and nuance of feel and feedback more rewarding at any given speed. Except, weirdly, on the track. But that, arguably, is what the 570S is for.

For a car to drive into the city and back Monday to Friday and then out to the country for the weekend the 911 Turbo S is still the boss. If you've been there and done that, however, the 570GT offers your first taste of a more exotic world, one with just enough of a grip on reality to make every day just that bit more special. Daily driver? The Porsche. Daily wow factor? If you can live with the more exotic vibe it's worth stretching to the McLaren if you can.