Impressing in Portugal is all well and good, but how does the new McLaren fare against the best £150K sports cars? To Wales!

Even on a dull winter morning, it's impossible not to smile walking out to these three. The Vegas Yellow Audi has chosen for this

is as subtle as it sounds, a blaze of sunshine on a dank Wednesday. The

broods in the corner, a familiar but fierce adversary for any £150K sports car.

Then there's the 570S. The reason we're here. In this company, with the R8 clearly inspired by the first generation and the 911 being, well, a 911 Turbo, it looks fantastically exotic. This may be McLaren at a lower price point than ever, but it looks every millimetre the bona fide supercar.

At £143,000 for the 570S, the new Sports Series faces rivals not previously on the McLaren radar and this pair is arguably best. It was too early to include a Huracan LP580-2, but both the Porsche and Audi will provide a very stern test. From Portimao the 'real world' doesn't come much more real than a sodden Wales, after all.

Driving along the M4, the 911 Turbo S seems like a good car to start in. For so long it's been the go-to choice for anyone after towering performance in a usable, practical package, remaining a formidable opponent even with its facelift imminent. 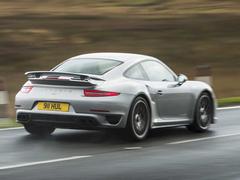 911's pace in these conditions is devastating

How on earth can the new car be quicker than this though? Sure, the Turbo S is not the most immersive 911 experience, but the confidence it engenders to brake later, turn harder and accelerate sooner is just staggering. It's certainly not a light car but the combination of exemplary damping, the indefatigable brakes and the freakish four-wheel steer give it the ability to cover ground at a ferocious rate. That engine just keeps on hauling and combined with the excellent PDK 'box the sensation is of unabated, unapologetic and plain brutal speed. If it looked the old stager, the 911 has more than established itself by the time it meets the R8 and 570S.

Moreover, it's far from outclassed even after exposure to those two. More detailed observations will follow but it steers better than the Audi and it feels as fast here as the lighter, more powerful McLaren. Yes, the conditions could hardly be better suited for a 911 Turbo, but its abilities are plain to see.

Once we're done, it's the car that looks pretty appealing to drive home too. And that's what the Turbo S does so well; there simply isn't a scenario it struggles with. It will take you to Wales in comfort, play the rocket ship once you're there and then slip back in with the masses on the way home. It's a car of personality too, the ability to switch between normal and nutty really quite endearing. To the next contender...

More words than used in this whole test could be dedicated to the R8's powertrain: it's genuinely spectacular. Even in this company both gearbox and engine feel superior in response, noise and sheer excitement. Those fleeting moments you can extend that 5.2-litre V10 towards 8,500rpm are to be savoured, its savage yowl beyond 6,000rpm quite sublime. The next gear is engaged immediately and it goes again, yearning for another run to the limiter. 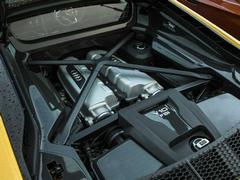 But the praise can be less unequivocal elsewhere. The optional Dynamic Steering continues to frustrate, undermining confidence as it decides the lock that should be applied. Annoyingly it's only after the test that it's pointed out the 'Dry' mode keeps the steering ratio fixed. In any mode however it's numb and doesn't help in conditions like this.

Once it dries out slightly, trust builds in the R8 and it becomes a much more entertaining companion. It feels lighter than its kerbweight, darting into bends while feeling eager and poised, with fantastic composure over the bumpy Welsh B-roads.

Problem is, on this fairly brief encounter at least, the R8 just isn't quite as enjoyable as the old R8. No doubt it's objectively a more accomplished car, but for entertainment and fun it's far tougher to call. The old car's steering was less immediate but more feelsome and the damping just seemed to flow that tiny bit better with UK roads. It felt like an excellent supercar that just happened to have an Audi badge on it; this R8 feels like a much more natural extension of the Audi range, with everything good and bad that that entails. It's a very good car with a sublime engine, of that there's no doubt, but it's a hard one to love on this experience.

By the time others have been in the McLaren, the cream carpets are mucky and the seats wet with the rain that pours in every time a door opens. If the Porsche suits these conditions the 570S looks out of place, the car surely designed for more lavish locations. Time to finish the McDonald's and start driving then... 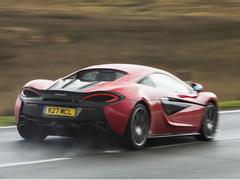 UK roads don't come much more UK than these!

Grubby or otherwise, the McLaren's driving environment is a triumph. You sit low but the scuttle is low too, making for great visibility. The pedals are perfectly set and the wheel is a model of simplicity, one to make the Audi's look cluttered and fussy.

Similarities with other McLarens continue on the road. There's a pliancy to the ride that its heavier rivals simply can't match; even with a more conventional set up than the 650S, the 570 mimics its ability to almost glide with a surface, comfort and control perfectly matched in all modes. The steering too is excellent, delicately weighted and yet with more detail in the first few metres than the Audi provides all day. Which is handy, because Pirelli P Zero Corsas really don't like standing water...

Those tyres and rear-wheel drive mean there's no chance of the McLaren matching the other two for pace in Wales. It's the only one that struggles for brake pedal feel initially too, the ceramics needing temperature to perform. That being said, the McLaren is easily the most rewarding and exciting car to drive. Where the Porsche can feel like technology is the major enabler to its pace and the Audi a little aloof, the McLaren is the only one that feels like a truly lightweight, finely honed and engaging sports car. It's brilliant, in fact.

Hopefully it won't be a surprise to learn that this is a tough conclusion to reach, all three delivering in certain areas the others can't match. The Audi is a very good car that feels like it's living in the in the shadow of its predecessor. Precociously talented and wickedly fast, it certainly holds key advantages over its two rivals. But in a limited time it didn't quite connect with the driver where crucially the old car would have immediately beguiled. Subjective gripes appear harsh justification for third place but it goes to show the talent on display. 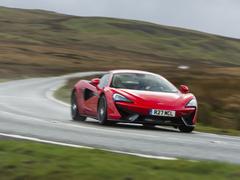 Not perfect, but certainly the best here

The Porsche sneaks into second. Just. Another time the Audi could have taken it, yet the 911's ability to not only deal with such horrendous conditions but also entertain through them is mesmerising. Perhaps it got lucky but there's no denying it was mightily impressive on the day.

The McLaren is a clear winner though, despite Wales's best efforts to assist the four-wheel drive cars. Yes, this particular 570S is noticeably more expensive than the Audi and Porsche, but that premium is accounted for in mostly cosmetic extras. Beyond those the McLaren's innate advantages, the dynamics, sense of occasion and sheer desirability, put it on another plane. The ideal combination would be a McLaren with the Audi's engine and the practicality of the 911, but we'll pack less and deal with the lag: the 570S is comfortably the best car.

Six of the Best | Heroes of the JDM

Automotive comebacks | Six of the best