It's not every day you drive a Dakar-winning race car. PH gets a go in Mini's dune-jumping All4 Racing

"Straight! Straight! Straight!" My co-driver shouts impatiently, but it's too late. We hit a jump that was previously invisible to me and the car launches all four wheels off the ground before landing awkwardly on the front right corner and slewing sideways in a long arc. At about 80mph. On loose sand. "OK, now straight", he says in an annoyed voice and we sprint for the invisible horizon. Once we exceed 180km/h (112mph) he tells me to turn around to head back to camp. No "slow down and turn here"; just "turn around". I repeat the instruction and he says "yes, anywhere"... 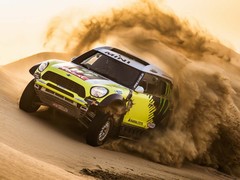 At this stage I'm nearing the end of an all too brief stint behind the wheel of this year's Dakar-winning Mini ALL4 Racing, and though relatively accustomed to how the car handles by now it's still a leap of faith to turn the wheel at speed and keep the power on. You're sat rather high up in this racer, which exaggerates the feeling of body roll somewhat, yet once settled on its springs the car is remarkably adjustable and surprisingly, amusingly easy to drift in the loose.

Crash, bang, wallop
Oddly, that body roll doesn't come with hugely compliant suspension, as you might expect looking at the massive ground clearance and specialised twin-damper/spring units at each corner. That's partly due to the restricted 250mm suspension travel (less than a Countryman WRC) required by Cross Country rally rules but also to ensure absolute control over wheel and body movements following an extreme bump or jump. As ably demonstrated by 2014 Dakar winner Joan 'Nani' Roma himself. 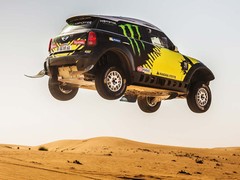 And there's rather a lot of jumping going on in the desert. We're about an hour's drive from Dubai in the middle of nowhere with a nominal 'course' to follow in the open desert. That top speed run followed several miles of what can only be described as a physical assault on the car and occupants. How the pros do this for two weeks and 9,000 kilometres (over 5,500 miles) at a time, often in six-hour stints, is beyond me. The first section was relatively easy, on the flat, following a meandering, rutted route through semi-soft sand. It's an opportunity to get used to the controls of the Countryman, as there was little time for a detailed briefing or acclimatisation beforehand.

Hold on tight
Thankfully we can ignore most of the bewildering array of switches, read-outs and controls in the cabin. The most important thing to (literally) grasp is the gear changing. A six-speed Sadev sequential gearbox is fitted, which requires clutch operation only to take off. Then it's a simple tug back on the centrally-mounted lever to go up a gear or bang it forward to drop down a cog. It takes a firm hand, but is quite easy to master. What takes more getting used to is the delivery of the engine and how it thrives not on revs but on low-down torque. It's like a turbodiesel in fact, only more so. 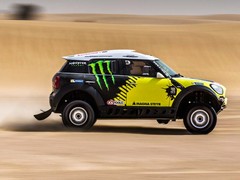 At the heart of the front-mid mounted engine is BMW's production spec 3.0-litre straight-six cylinder block. Developed by BMW Motoren GmbH in Steyr, Austria, the engines are actually hand built by Alpina before being shipped to the team's base near Frankfurt for assembly in the cars. It uses two sequential turbochargers, and while the Mini's 307hp peak power figure isn't anything special to write home about, its 516lb ft of torque certainly is. To make the most of this you change up at not much more than 2,000rpm (maximum torque is produced at 2,100rpm, while the power tops out at just 3,250rpm), which feels odd at first. In the softer, deeper sand of the track, during tighter turns, it felt as if the Mini might bog down completely, but my co-driver reassured me that I just need to keep the throttle planted. Sure enough, from seemingly idle there's a whistle and a whoosh from the turbochargers as they overcome the situation and before you know it it's time to change up again and there's a blind crested sand dune approaching fast. 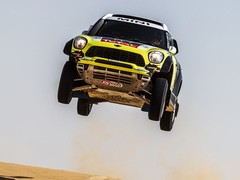 Coming in for landing

You'll see plenty of dramatic big air pictures of the Dakar Countryman. They look composed, serene even. Believe me: that's the case for a split second before the car crashes down to earth with a thump. Unless the ground is smooth and flat after the jump it's a gut-wrenching experience time and again. There are no soft landings, which is partly explained by the hefty (determined by the rules) 1,900kg kerb weight. Of course the Mini shrugs off the abuse, even when I sense the co-driver tense a little as I hit a jump faster than he expected and the nose briefly buries itself in sand before exploding back out the other side. The sheer ruggedness and reliability of these cars is evidenced by the fact that they were due back into active competition only a week or two after our test.

As our time in the car was short I barely noticed the lack of air conditioning, or the stifling 40-degree air in the cabin. It's not what you'd call spacious in there, though the upright windscreen (one of the few carryover parts from the production car) helps. The car is a bespoke construction with a steel roll cage and survival cell and carbon fibre body panels, about five per cent larger than the car it's designed to mimic. Other than the windscreen, only the lights and door handles are shared with the showroom model, which means there's no comparison between this and the WRC version either.

Except perhaps for the expletives used by the co-drivers...