The science of flow, discussed with Jaguar's Mike Cross

If clichéd, over-simplified descriptions of 'soft' or 'sporty' handling by journalists annoy Jaguar's Mike Cross he's far too patient and/or polite to say. Even when invited. "I wouldn't want to criticise..." he says, gently. Feel free, I say. Hero status assured. But he's far too tactful. Sorry. 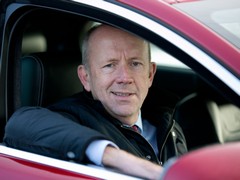 The invitation to spend some time with Mike followed

a blog on flow

last year. It got a great response but the one that stood out was from Mike, inviting me over for a drive some time to discuss the subject in more depth.

The 'I've been out with Mike Cross' story is a rite of passage for many a car hack, yours truly included. It usually involves breathless descriptions of heroic amounts of tyre smoke and oversteer, all delivered with trademark calmness and precison. But our drive today rarely sees us above 50mph and, bar one cheeky dab of oppo for the camera, is conducted at a languid and relaxed pace, the better to chat about how you actually engineer flow into a car.

Sideways glances
Mike's formal training as an engineer came at Coventry Poly and then a period as a student apprentice at Land Rover. The informal bit from the cars he owned at the time. He muses on a back catalogue that'd have any PHer green with envy. "I had an Escort Mexico, RS2000, Sunbeam Lotus, Chevette HS, a couple of Capris..." he muses. "You must have had a taste for-" I begin. "Oversteer?" he grins. 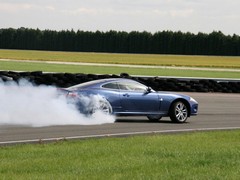 ...but it obviously has its perks too!

So, a background in sideways-friendly cars and mechanical engineering, which brings us to the role he's held since 2000 - Chief Engineer, Vehicle Integrity at Jaguar Land Rover. In short his role is to turn those wishy-washy adjectives into objective data.

Surely though, the days of seat of the pants chassis engineering are long gone? Mike disagrees. "Ultimately that's how customers judge their cars," he points out. "We look at what you guys write and we look at customer satisfaction data so we have those feedback loops." Gawd. So all that florid dab of oppo nonsense actually gets listened to?

And I spanked it
"I suppose we'd use words like immediate, connected, linear," replies Mike thoughtfully. "Probably pretty dull language really but initially it's a verbal statement of intent." Competitor comparisons and objective analysis - specific, repeatable test track exercises in other words - follow before a list of quantifiable benchmarks underpinned by the brand DNA. If the car meets these Mike's got something to work with. Which basically involves driving. Lots and lots of driving. 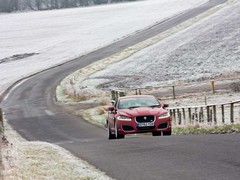 The classic British B-road remains at the heart of it too, which brings us back to flow. Mike's local shakedown roads have it all, often in the space of a couple of miles. Even in a 500hp-plus Jaguar

So how do you engineer flow into a car? "The immediacy of the steering is a really key communicator," he says, decisively. "Richard Parry-Jones said you could always make your mind up about a car in the first 50 metres and I think he was right about that."

Feelsome
Nice to know we're not the only ones obsessed with steering feel then. "Linearity of response, especially when you're going back and forth across centre like on this bit of road, is important," he says as we weave along one favourite snaking section of local back road. 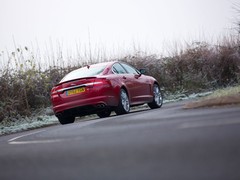 Making a fast car fun to drive slowly is the challenge

? "I actually think the electric steering in the new Range Rover feels better than the hydraulic system in the old car," he says decisively. In short there's more to it than how the assistance is delivered. "A surprising amount of steering feel, a larger amount than you might think, comes from the rear suspension," he says.

But how do you make a near-two tonne car with over 500hp and capable of nearly 200mph flow on a road where 50-60mph might be all you'd sensibly carry? "It's about how the car works with the road," he says. "It's perhaps easier with a lighter car but I like to think even with the XFR we've achieved that too. You need to be able to interact with a car at all speeds. If a car is only really capable when you're flat out it's unsatisfying." 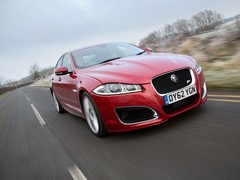 Too much of a good thing

he reflects that, by the standards of the day, 150hp and 150lb ft made it a quick car. "It was twitchy though," he recalls. "Probably quite a lot slower ultimately but approaching the limit of a car is the satisfying bit and in some ways the level of that limit is irrelevant." Has he driven a GT86? No, but he'd like to.

And he's right, of course. Making fast cars fun to drive slowly too is a real art and why his brand of subjective analysis remains a vital skill. And one involving some unexpected new developments. "NVH is an interesting one," he says. "There's unwanted NVH but there's actually an increasing emphasis now on making a car sound good so there's a positive sound quality too." Going by the recent F-Type teaser vid something Jaguar has been working hard on. Engine noise through the speakers then, Mike? A polite smile from a man who spends a lot of time on PH and is aware of the collective view on such fakery. 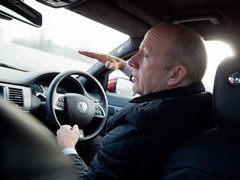 Mike in the office he spends half his time in

One could spend all day discussing this stuff but we've already taken up half of Mike's, and he has to disappear back into the heart of the JLR machine. This flow thing might sound like an abstract notion but among the neverending tech onslaught new cars throw at us it's nice to know it matters to those building them, as well as those driving them.