PH Revisit: Behind the scenes at Retropower

We came, we saw, we left. But now we're back for more! And on a semi-regular basis, too... 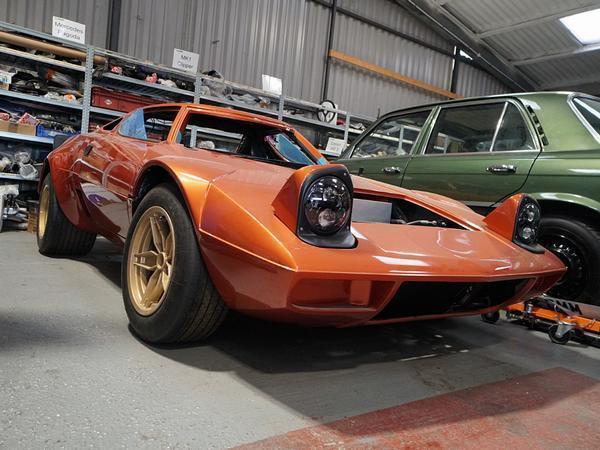 You'll probably recall our visit to Retropower last month. Our primary reason for calling into its Leicestershire-based workshop was to see Gordon Murray's bespoke Ford Escort taking shape - a labour of love which has taken on a life of its own elsewhere on the internet. But when we got there it turns out that the Mk1 belonging to one of the world's great car designers is just one of many fascinating projects currently underway in Wykin Village.

Clearly there wasn't going to be enough time to cover off everything in a half-day of nosing around (there was a dog to pat, after all) so instead we thought it might be nice to keep in contact with the Retropower brain trust - owner/brothers, Callum and Nat - and bring you a regular behind-the-scenes look at some of the more interesting examples of one-off engineering going on behind closed doors.

First up then, we take a look at the fabrication work required to bring a rusty Alfa Giulietta back into line, the capabilities of Life Racing's PDU, how to set about devising a custom supercharger setup, and what's involved with finalising an LS3 powered Merc...

Alfa Romeo Giulietta
Italian classic cars being prone to rust sits near the very top of the great list of automotive cliches, just above French car electrics and all German cars being hewn from granite, but as is the case with many cliches, there's a grain of truth to it. Case in point, this 1960 Giulietta, among the most challenging bodywork restorations Retropower has yet tackled.

"We're used to working on cars with rotten bodywork of course, that's why we commence all our restorations by taking them back to a bare shell and media blasting, but this has proved to be a particularly galling undertaking thanks to the advanced state of the corrosion, and also the amount of bodywork damage from various impacts over the car's life," explains Callum.

The end result of all this can be seen here, with Stu Gunn, Retropower's prime fabricator, having spent much of the past week panel beating a series of one-off replacements for the Giulietta's front end, the vast majority of which are no longer available from Alfa Romeo (or anywhere, for that matter) Both the inner wings and associated bonnet rails have been painstakingly recreated using a combination of an English Wheel, various presses and shaping blocks, not to mention Stu's decades of hard won experience, as have both sills and the front panel.

"That's been among the trickiest single panels to date, mainly as it's such a complex series of shapes to fabricate," explains Callum. "The trailing edge is relatively flat and Stu was able to recreate it within a day or so, whereas the leading edge, complete with radius curves, ninety degree bends and various catches, took considerably longer to complete."

Lancia Stratos 'Volumex' Power Distribution Unit
As much thought goes into the finishing of Retropower projects as the body and paintwork, particularly if the car in question is one of the firm's restomod projects. Case in point, the Lancia Stratos 'Volumex,' a car slated to be powered by a supercharged example of Alfa Romeo's glorious 'Busso' V6, the construction of which is well underway.

"We've long reasoned that there's little point in building performance cars if they're destined to be compromised by outdated electrics and fuses, which is why we've begun to use Life Racing's Power Distribution Units (PDU) instead. It's a system favoured by many of the current crop of WRC and WEC teams."

The concept at the heart of the PDU is actually pretty straightforward, it being a means of routing power around the Stratos (or more correctly, the totally re-engineered Lister Bell) without anything as rudimentary as fuses or relays. Comprising of the PDU, Life Racing ECU and control panel, the suite can control both digital inputs/output and analogue inputs/outputs, all linked via a CANbus-wired system.

The above might at first sound a tad dry, but its capabilities are anything but. The owner of this Stratos will be able to control every electrical system via a touch keypad which falls beautifully to hand in a bespoke pod on the driver's door. The 9" display screen can be programmed to display data in any way the user desires and this can include not only any engine sensor reading but also details such as electrical current draw on any individual output channel. Control buttons can be 'remapped' to operate different functions with a few keystrokes of a laptop, so the entire system is truly configurable to the owner's exact preferences.

"It's the best means we've found both of displaying and interrogating data, and that's before we touch upon the safety advantages associated with the lack of archaic fuses."

Lancia Stratos 'Volumex' Busso V6
If you know one thing about the original Stratos, it's that it was powered by the a V6 cribbed from a Ferrari Dino - a car not exactly known for being either commonplace or affordable these days! Seeing as Retropower don't fancy the expense of sourcing said V6 or incurring the wrath of the Tifosi by chopping it up, they've instead opted to base the car around a supercharged Alfa Romeo 'Busso' V6.

Actually devising a supercharged setup for this engine, one intended to be a pure, naturally aspirated design from the factory, has required a fair bit of one-off engineering. The 'charger (an Eaton M112 from a Jaguar XJC, boost nerds) has been fitted with a custom mount and now sits atop the engine, but this has created more questions than it's answered, mainly how and where to run the supercharger belt run and which pulley and tensioner to use.

"The tensioner and idler assembly is actually a modified Ford Mondeo V6 item, though we'll have to combine it with a billet mount and bespoke crank pulley with integrated supercharger drive, both slated to be machined from billet aluminium in the next few weeks," explains Callum.

Mercedes W108 'Project Kaiser'
The long term nature of all Retropower builds means that many take on a life (and a following) of their own, with 'Project Kaiser,' an LS3-powered W108 'stack light' Merc a classic case. Slated to be the first in a trio of similarly powered Benzes from the same era, all for the same owner, Project Kaiser has taken on a life of its own online.

That GM V8 lodged between the front wings is mounted to another piece of hardware from 'The General,' a 4L85-E autobox, but much of the rest of the running gear hails from far closer to home - Coventry, in fact. Both front and rear axles formally served within a Jaguar XJ, an X300 generation from the late '90s, and therefore both able to cope with the engine's projected 430bhp power output, and at the same time gifting it a Limited Slip Differential, which is always a handy thing in a car of this kind.

"Inside is another of those areas that's garnered a significant amount of attention from followers of the build, largely as it's probably among the most 'bespoke' interiors we've yet tackled," explains Callum.

Bespoke is most definitely the correct term here, with the interior now dominated by a sweeping centre console, running unbroken from front to back and with a series of aluminium recesses. One will eventually be home to the air suspension control system and wireless phone charging facility, while the rear, in a nod to the occupation of the individual commissioning the car, will sport a recess moulded to ape the contours of a specific bottle of single malt scotch.