Subaru BRZ or Toyota GT86? PistonHeads has got them head-to-head to settle the question once and for all!

It's the comparison test we've all been waiting for and yet realise, deep down, is ultimately totally pointless. The Toyota GT86 and Subaru BRZ are one and the same. But you're not going to buy both so how do you choose between them? Somehow we managed to score loans with both cars at the same time and here we'll attempt to answer that very question. 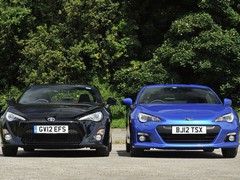 We did consider some impromptu badge engineering with the aid of a screwdriver for maximum spot the difference hilarity. But there are just enough variances between them to scupper any such plans. That and the fact the Subaru was in signature WR Blue too. Doh! No, much more useful is to get them alongside one another and circle the differences both in the metal and on the road. So that's what we did.

Let's start with the back end first. This is exactly the same. Is it really that expensive to manufacture two types of rear bumper? All that's different is the badging and, as if to underline this, the locations are different - Subaru sticks its above the numberplate, Toyota below. The GT86 has that magic eye logo too, which is replicated on the (fake) wing vents - another difference inserted on the production line. The BRZ badging is again plain. 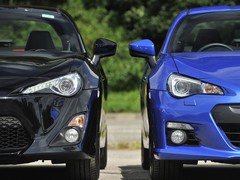 The sole bodywork change is at the front, where two types of bumper are fitted. The Toyota's is more aggressive, more heavily sculpted, with racy black mesh instead of the plain fins of the BRZ. Its daytime running lights sit in the main headlight units too, frowning menacingly when on, whereas the Subaru's lie lower down in the bumper. Which you prefer is entirely down to personal preference. We couldn't decide - some liked the stronger identity of the GT86, others liked the purer style of the BRZ.

See if they smell any different, challenged the editor. By Jove, they do. The test Toyota had a rather pimpy red leather and Alcantara interior, which made it smell... well, buttery. The BRZ smelled like a Japanese car: preferable. Some also preferred its simpler look, without the etched-in dial detailing and dash panel pattern, while others erred towards the simpler dial fonts and plain silver dash trim of the BRZ. Can you see a theme developing here? 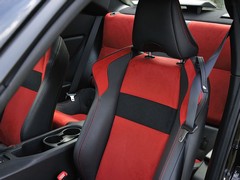 The BRZ had the standard CD stereo, which lights up in green and clashes awfully with the orange backlighting of the switches and dials. The Toyota's optional sat-nav is a better match, but the yellow hue still isn't quite there. Perhaps this is all part of the aftermarket-tuned ethos of these cars. Apart from the different interior trim options packs, the layout is the same in both. Neither alters the inch-perfect driving position and nicely shoulder-hugging seats that are such a draw.

Both also sound the same on the move, with a tasty induction howl and exhaust growl. Thank Subaru for the latter: both cars sport an exhaust backbox branded with its logo... 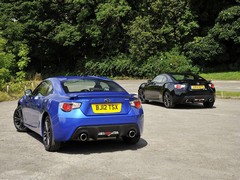 There are seven paint choices on the GT86, six for the BRZ. Common colours are white, grey, silver, red and black: both have their own shade of blue (Subaru of course taking WR Blue) with Toyota offering an additional hue, Velocity Orange. Subaru charges you £500; Toyota charges £450 for metallic, £650 for pearlescent.

Warranties and aftercare are the biggest difference. You get five years and 100,000 miles on the Toyota, three years and 60,000 miles on the Subaru. However, with the BRZ, Subaru's three-year ETCo aftercare package is included free - giving you implausible extras such as a free monthly car wash and annual detailing spruce-up, free annual wheel alignment, even free scratch and alloy repair. The inclusivity of the latter (they'll even replace your keys for free if you lose them) swings it for us. 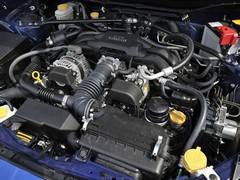 Amusing detail on technical specs: the Subaru is 0.1sec faster to 62mph. No it isn't - that's different rounding. The Toyota is 1kg lighter. No it ... well, actually, it could be. Perhaps integrating the daytime running lights into the headlights has saved a fraction of a kilo? Maybe using mesh in the front bumper cuts vital grammes? It's a deliciously nerdy fact to pore over. Like many aspects of this fundamentally brilliant duo.

We spent a day driving these two back to back. And for the first two hours, were scratching our heads. Jumping from one to another, a finger was raised ... but then lowered once back in the other. Perceived differences were really just that. In this situation, you need to get all this preliminary swapping out the way, find a representative road and then drive them together. Then, turn around at the bottom and do it again. Then, get into the other one and do it again. That's what we did. 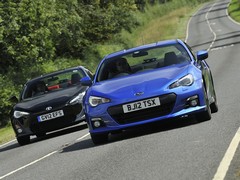 Headline differences here - the Subaru's front end is a bit sharper, keener to turn in. It steering is weightier and more direct just off centre. There's more immediacy to fingertip inputs. The Toyota? It's a bit lazier to turn in but, once there, its rear end seems a bit livelier, as if you can lean on it more and have a bit of fun.

And those differences in detail. The Subaru demonstrates more linearity on turn-in. The build-up of forces is faster at the front and the transfer to the rear is more gradual. In the Toyota, the nose takes a fraction longer to respond but then the flow of weight transfer to the rear is faster, placing more sudden force on the back wheels. The rear is stiff enough to control it but this still, if you're manfully aggressive, leads to more work for the stability control to do - or, if it's off, easier tail-tweaking fun (ably demonstrated by Mr Harris). These are differences of real minutiae, but do become apparent with miles and legwork.

There ARE differences in the way they drive

There was disagreement on the ride at first. Some felt the Subaru was better, others, the Toyota. So we analysed further and concluded the Subaru is a bit more taut at lower speed, so is jigglier in town, but more measured at speed. The Toyota is a little softer at slower speed and this can lead to a fraction more reaction over undulating surfaces at speed, making it feel less settled. It's a lightbulb moment when this clicks.

The editor did ask us to note whether we forgot which one we were driving until we checked the badge on the steering wheel. Certainly, we may have done, if the Toyota's interior had been less chintzy. But, with experience, no. Just turn said steering wheel if in any doubt; weighty, faster reacting? It's the Subaru. Then, as it turns in, do you feel the rear end wake up more brightly, the tyres talk to you more? It's the Toyota. Simples. And only took two tankfuls of unleaded... 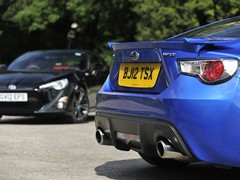 Is it a Toyota or a Subaru at heart?

This, ultimately, is the big one for most people. Do you want to be seen driving a Toyota or aSubaru? For enthusiasts the Subaru badge and its associations with Imprezas great and small has to have more appeal than a brand more associated with white goods like the Auris, Avensis and - boo, hiss - Prius.

But Toyota has been fighting back with all its considerable marketing might to underline its credibility. It's wheeled out the classic AE 86 Corollaand harked back to its cult following among drifters and affordable rear-wheel drive heritage. It's dusted off a little-known (outside of Japan) boxer-engined 60s coupe called the Sports 800. And though it has a flat-four the BRZ has no turbo or four-wheel drive - both key Subaru identifiers.

One-nil to Toyota then? The jury was split. Some like the Toyota's blatant attempt to piggyback on AE 86/Initial D drift sensibilities and the way the livelier drive supports that. The flipside is a sense it might be trying too hard and if you're looking for the pure spirit of this car the BRZ embodies it more faithfully. And under the skin - and badges under the bonnet - it's stamped with Subaru identity through and through. Too close to call, in other words. 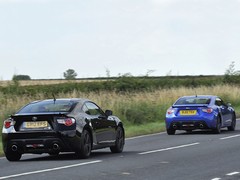 The Subaru and the Toyota are the same. To look at they're like identical twins wearing different hats. On the road, the differences are more subtle, but still there. The BRZ is a bit more sophisticated, a bit more measured, reflecting its more sober detailing. The GT86 is a little more extrovert, a little more lively, reflecting its more outlandish detailing. Which you go for depends on which nuance you prefer.

Unless your favourite colour is either blue or orange. Then, the decision is simple. Infinitesimal difference in feel or the pride of polishing the colour you love? No argument, really...