Performance-orientated Mustang GT upgrade is headed to the UK 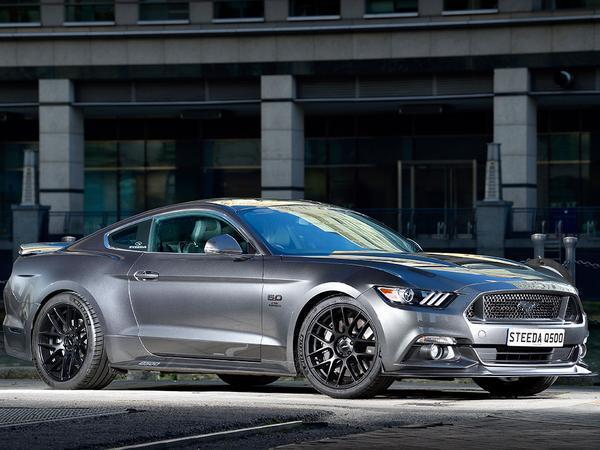 When it comes to the modification of American muscle, there are plenty of companies willing to turn your pride and joy into an ostentatious, bajillion

. What's harder to find is an outfit to sensibly improve things with

. Our hopes are high in this case, though, with Steeda revealing that its latest creation will be making its way across the pond.

Many a petrolhead on this side of the Atlantic won't have heard of Steeda before, but if you're a Ford enthusiast in the US then you'll almost certainly know the name. The world's largest privately-owned Ford performance specialist, it makes parts for everything from the Fiesta to the F-150, its catalogue featuring of over 4,000 ways to fix, fettle and finesse your Ford.

The company has previously

to these shores, but today's announcement of its first turnkey offering for the European market is a first. Derived from the 5.0 V8 Mustang, the Q500 Enforcer - because 'Murica - is described as "a practical and usable sports car that offers noticeable improvements in performance, chassis design and styling over the standard Mustang."

To that end it features a bespoke cold air intake system, revised engine mapping, and a custom exhaust, freeing an extra 71hp and 70lb ft of torque from the Mustang - for new totals of 487hp and 485lb ft.

Underneath, the Enforcer keeps things under control with thicker adjustable anti-roll bars and Steeda's custom progressive rate springs, strut tower brace and upgraded bushes. The result apparently being a lowered stance and more planted rear end, as well as a noticeable reduction in wheel hop and deflection. Those wheels are 20-inch Velgan VMB7s which, despite being an inch larger, weigh the same as the standard Mustang items - 19-inch options are also available though.

Styling-wise, Steeda says it has gone for a 'factory-plus' appearance with "subtle exterior updates which tighten the Mustang's iconic lines." In true American fashion it's very much business at the front, party at the back, with a new splitter, developed on Steeda's race Mustang, and a ducktail spoiler being the main additions.

Should all that not suffice, there's a wide range of accompanying options tailored for either road or track. These include a Steeda Coilover Kit - adding fully adjustable dampers front and rear - a heavy-duty Tremec Magnum XL six-speed manual - which can be specced with multiple gear ratio options - an upgraded twin plate clutch, heavy-duty aluminium driveshafts, and vented brake discs. All of which can be specified during build or retro-fitted at a later date.

If a conservative power increase and sharper handling sound like appealing prospects, then Ford Haynes of Maidstone is accepting orders of the Q500 Enforcer now. The price for the 'basic' upgrade stands at just under £9,000 - plus the cost of a Mustang GT, obviously - but the sky seems being the limit when it comes to those extras. As to whether that outlay is worth it, the proof will of course be in the driving, something we'll hope to update you on soon.