One R8, plus the south of France, minus one roof equals a very good time

The clouds that cover the Cote d'Azur in a grey haze as we land at Nice airport are perversely appropriate for the launch of an open-topped car like the new Audi R8 Spyder. 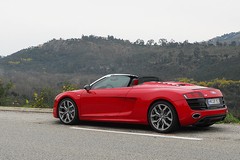 The Brits are the most active buyers of convertibles, roadsters and spyders in Europe and, since even the most glorious summer's day in Blighty is prone to turn wet quicker than you can say 'light drizzle', a wet-weather test of Audi's new roofless supercar seems more than apt.

But although the weather is on the money for UK-bound R8 Spyders, then the location Audi has chosen for our first chance to try the open R8 - the French Riviera - is very much the R8 Spyder's spiritual and conceptual home. After all, a car like this is as ideal for cruising (and, yes, posing) on the streets and waterfronts of Antibes, Nice, Cannes and Monte Carlo as it is for haring up the switchback passes that criss-cross the nearby Alpes Maritimes. 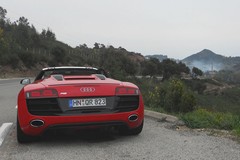 Exotic convertibles - especially mid-engined ones - are unavoidably as much about street theatre as they are setting blistering lap times or hitting 300kph on the Autobahn.

The R8 Spyder certainly scores high marks in the visual drama stakes. It has lost the side 'blade' of the coupe, making it look longer and lower. In the metal, the way the Spyder hunkers down onto the Tarmac really does make it look mean. But we'll let you make your own mind up about the looks - what's going to be interesting is this: has lopping off the roof compromised what, in coupe form, is surely one of the most dynamically involving Audis ever created? 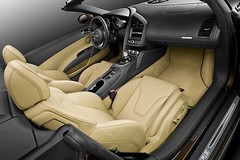 The simple answer is no: astonishingly, the soft-top R8 manages to pull off the scarcely believable trick of almost-never feeling more wobbly than its tin-topped sister. Yes, strings of lumps and bumps will send minor tremors through the cabin, but the effects of rooflessness are well hidden - the slightly softer suspension settings no doubt play a part here.

Audi has clearly worked hard on keeping the Spyder's structure as solid as possible, employing strengthening tricks such as making the undertray a load-bearing aluminium structure rather than a stick-in plastic item.

Thanks to strategic use of carbon fibre (the hood cover is made from uni-directional stitched carbon composite), the weight penalty is just 100kg. Stick a chubby passenger and luggage into an R8 coupe and you'll add that much weight easily. 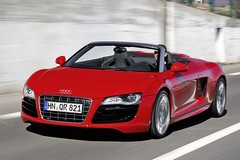 What does make a difference is the engine - the marginally heavier V10 does rob the R8 of some of the tip-of-the-toes agility that distinguishes the V8 R8. The pay-off is more than worth it, however, especially in a car with no roof; the snappy, barking, bassy V10 is a truly joyous thing to listen to it. Hearing the bellowing V10 bounce of the orangey-red cliffs west along the coast from Antibes is a truly special experience.

The R8 Spyder backs up its bark with some serious bite, too. With 518bhp and 391lb ft of torque on tap, the four-wheel-drive R8 Spyder will catapult you from rest to 62mph in 4.1secs and will keep pushing until 194mph. Providing you keep the engine percolating above 5000rpm (peak torque doesn't arrive until 6500rpm), in-gear acceleration is every bit as ferocious as the noise and performance figures lead you to expect.

This is a good thing if you're really going for it, because although the open-gated six-speed manual gearbox creates a wonderful sense of occasion, it can be occasionally mildly obstructive, particularly when shifting from third to second. Third gear is enough for most roads, however - an enthusiastically driven Ducati came past us as we swept along the coast, but the 30mph-100+mph operating range of third was more than enough to comfortably keep the Ducati in our sights once we wound the wick up a touch.

As well as the six-speed manual, the R8 Spyder - again just as with the fixed-roof versions - is also available with a six-speed automated manual R tronic sequential transmission. Our advice? Avoid it. The shifts are a little too jerky and, in full automatic mode, the 'box will shift up and down when you really don't won't it too. To pay an extra five-and-a-bit grand for the privilege of losing some sense of occasion, and adding frustration, seems like madness.

Specify an R8 Spyder with the optional suede-rimmed steering wheel, a manual gearbox, and optional hip-hugging sports seats and there's more than a hint of RS Porsche to the experience - if Porsche made a mid-engined, soft-edged convertible supercar, that is.

The Porsche analogy actually runs deeper than that; the R8 Spyder is a bit like a faster, more exotic Boxster - soft enough to be comfortable yet sharp enough to please the enthusiast whenever the occasion demands. It might seem like damning with faint praise to compare a 518bhp V10 roadster that's as close to a supercar as Audi gets right now with the most humble of Porsches, but the Boxster is as close to an ideal mid-engined roadster as you'll get. To bear comparison with it is praise indeed.

But I'll end with a minor caveat - Audi still needs to master the trick of putting soul into a car. The R8 is nearly there - it sounds fantastic, looks dramatic inside and out, and handles beautifully. But there remains a whiff of cold, crisp efficiency hanging in the air around everything it does. But the day Audi creates a car with the passion and soul to match its desirability and ability, Ferrari, Porsche, and Aston will really have something to worry about.