The most expensive Lotus has landed. And it lives up to its billing

Lighter, faster, more aerodynamic, better handling, better built: stock phrases (and good ones) that you could apply to any new Lotus variant created over the past three years under the watch of company boss Jean-Marc Gales. And true they are again of this, the new Lotus Evora GT430. With it, we reach something of a watershed moment: the £100k Lotus. Or rather £112,500 to be exact. Yes,

will cost you six figures too, but that's a race car with number plates - the 430 is a rather different animal. 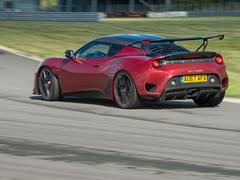 Not that Lotus thinks it'll have any trouble selling the last few it's got left. It started life as a production run of 30, which soon became 60 off the back of demand. That 60 then spawned another 60 of a 'Sport' version (effectively the same car without the aero package). The US is interested too, so once this production run is done, there will be 60 federalised versions of each flavour heading stateside.

The name is the giveaway to what's new about the GT430 and the purpose behind it. The GT part is borrowed from the Evora GT4 - the racing variant which shares as much with the latest model as the Sport 410 directly below it in the Evora pecking order. It is the race car which donates its suspension system, comprising lightweight Eibach springs and manually adjustable Ohlins dampers. Also taken from the GT4 is the adjustable traction control system, and the inspiration for a whole new aero package, which creates some 250kg of downforce according to Lotus. 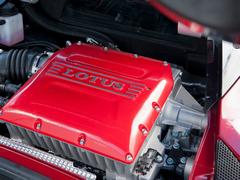 The 430 part of the car's name refers to the power output, some 20hp more than the 410's, erm, 415hp. The rear wheels drive through a six-speed manual gearbox; the one with the improved gearshift taken from the excellent

. There's an auto' version as well, although that impacts on the torque output, 0-60mph time and the top speed.

The weight saving mission Gales is now on has reached the point where he thinks it'll be a next generation car before anything meaningful can come out of an Evora again. For the record, the GT430 weighs 36kg less than the Sport 410, and the diet of salad and tap water this time has even turned to the washer fluid bottle, which is now tricked into believing its always full (thereby negating the need to keep all 7 litres onboard). 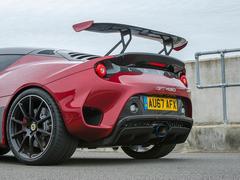 The car's wider limits are something you'll struggle to breach even when leaning against them on track, such is the GT430's level of grip. Flattering decent drivers and challenging experienced ones is how Lotus wants the Evora GT430 to be considered, and that's the way it feels. This is a car that seems quite intimidating in the press pack, yet is quite easy to get in feel confidently quick after only a couple of laps of Hethel's circuit. Maybe not Lotus chief engineer Gav Kershaw quick (who has set the lap record for a Lotus road car in the GT430) but quick enough to make the Evora feel more supercar than sports car.

You can play around with the various levels of traction control involvement to the point where you can get the car to slide, but in truth a rather inflated pair of cajones are needed to hold it. Not unusually for Lotus, this is a car more about rapid changes of direction than prolonged oversteer, with a turn-in so immediate and precise you'd have to be driving a proper race car to replicate it.

It would be understandable if that extraordinary track ability made the Evora a far less usable road car as a result. Yet it's not; granted, it's firmer than it's ever been on a British B-road, but the ride is not brittle or overly wearing. The tyre roar in the cabin would be a harder thing to live with, and although as well put together as it's ever been, the cabin remains an Evora with the ergonomic and visibility foibles that can be traced back to the car's near decade-old roots. 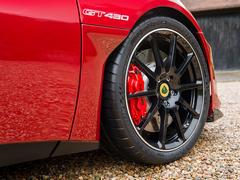 And that powertrain, as urgent and responsive as it is with its extra power and less weight to carry, remains the Evora's greatest limiting factor when it comes to earning its place in the supercar price index. That's not to say you'll be wanting for more speed, just that its rivals (and Lotus is open about listing the likes the

about being a rival) all offer a greater and more invigorating brand of straight-line performance.

Will the buyers of the car care? Evidently not. Nor will they need to spend much time thinking about whether or not a Porsche 911 GT3 is a better all-rounder. But the world is undoubtedly better place with the rarefied Evora GT430 in it. In handling terms, it is one of the world's foremost models, and the fact that Lotus can sell it at a higher price, for greater profits - so that it might generate future products in turn - is just canny business sense. That's something there's not always been enough of at Lotus; if the GT430 is what results, let's hope for much more of it.