There's an air of confidence around Hethel at the moment. No doubt that sentence has been written a fair few times before in less auspicious circumstances, but the current faith in Lotus is built on more solid foundations. Lotus Cars is back in profit for the first time in decades, the

are being made off the profits. 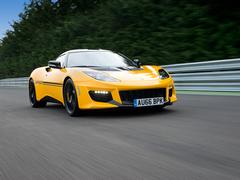 An Evora with some attitude!

Moreover, it's a Lotus special in the finest Hethel tradition. Power is only up 10hp (to 416hp), but this Evora is full of gorgeous details that save precious kilograms; not only that, they give the Sport 410 a real junior supercar look that can go a long way to justifying the price. A point we'll be returning to...

But take the new one-piece carbon bootlid. It replaces the five separate panels used in the Evora 400, saves 12kg and looks absolutely tremendous. Less weight means a strut isn't needed for the boot either. It even affords decent visibility, the view out through carbon slats to the new spoiler and the traffic behind about as exciting as looking down the A140 can be.

The full list of weight saving measures was covered back in February - this about detailing how they come together - but it's worth making a note of a few: the forged wheels save 7kg of unsprung mass (and are unique to the Sport 410), the new bucket seats save 9kg each and there's even 5.5kg of sound insulation taken out. This is Lotus's Speciale, says Jean-Marc Gales, and the weight-saving attention to detail merits that comparison. They've even done the decals instead of badges trick. With the optional (£5,500) Janspeed titanium exhaust dry weight is 1,270kg, or 1,315kg with its fluids and a 90 per cent full tank. Air-con adds back in 8.5kg, the infotainment system 4.3. If you're a big sissy. 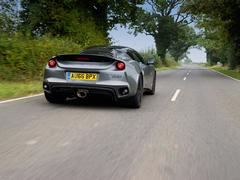 You'll definitely want to be here for the noise

Enough numbers though - how does the Evora Sport 410 feel as a sports car? Absolutely brilliant, in fact, which begins before the car has moved a metre. It looks like the car the Evora was always meant to be, less fussy than the 400 yet more exotic and more aggressive without being brutish. It feels like a more expensive car inside too, the quality of both the build and materials feeling to have stepped up even just recently. A Porsche PCM system will make the aftermarket Lotus infotainment look low rent (if you have it), but this Evora interior is pretty good.

And, of course, it's truly excellent to drive. So much of what makes the Sport 410 good is recognisable from other Lotus products, but as those traits so rare in fast cars today they're worth repeating. The hydraulic power steering is lovely, feelsome and precise with some added turn-in bite thanks to the standard Michelin Cup 2s. There are no modes, no variable rack or ratio; just well-calibrated steering that's confidence inspiring and a joy to use.

Same goes for the suspension. The dampers are stiffer in compression (25 per cent front, 20 per cent rear), the ride height is five millimetres lower and there are some track focused geo tweaks, but it's just suspension. It doesn't have a track setting, it doesn't need the dampers slackening off in a particular mode and nothing needs to be paired with the heavier steering for your favourite B-road. It just works, and works everywhere. 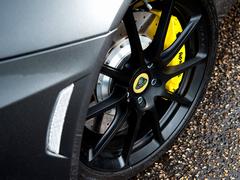 Certainly this must be one of the firmer riding Lotuses, but the Sport 410 hasn't lost that famed ability to smother bumps and it retains genuine compliance. It's a busier, more focused experience, but one that's befitting of a track focused Lotus and certainly not overdone. The prospect of driving to a track, pounding around all day and then cruising home is not one to fear. It's one to relish, in fact.

On the road the Sport 410 is as communicative, involving and adept as we would expect of a Lotus, only with a level of intensity unfamiliar to the Evora. It's eager and urgent, but never edgy or intimidating. That supercharged V6 howls its way to 7,000rpm willingly, the manual gearbox is slick and a world away from the stringy stereotype Lotuses are known for and the brakes are superb. Of course it's quick - certainly that 190mph claim feels realistic - but it's the way that the Evora engages its driver that remains such a big part of its charm.

At the Lotus test track the Evora Sport 410 is said to be three seconds quicker than the standard 400 and a remarkable 13 seconds ahead of the original 280hp car. Arguably it's an even more satisfying package on circuit, its huge grip and traction combined with the tactile controls giving you the confidence to push harder and brake later. It would be worth trying the car on both the Cup 2 and the optional Pilot Sport 4 tyres if possible; Cup 2s are fantastic and perfect for the track day fiend, but for actually exploring a car within reasonable limits something more aggressive might suit. Or PH needs some more talented drivers... 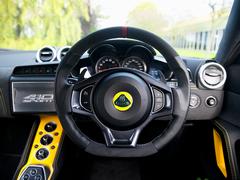 It's hard to come away from the Evora Sport 410 without feeling hugely positive. Its compromise between road and circuit ability feels perfectly judged, its concessions to one never feeling to upset the other. It certainly could have been more track optimised, but then it wouldn't reward on a B-road as much as it does. Make it too habitable and it would be hard to justify over the standard Evora.

No car is perfect though, and this Evora is no different. While this is perhaps the best installation of this powertrain yet, both engine and gearbox don't feel quite as special as in the Porsche equivalents. Yes, even the 911 Carrera turbos. Sorry. They rev a bit more keenly and the manual gearshifts are better. The Lotus auto is much improved but a PDK is still sharper. In isolation the Evora is very good in this regard, the manual gearbox in particular, though room for improvement remains.

Despite looking fantastic and saving valuable weight, the seats proved a little uncomfortable. And, er, perhaps some people might not like the stickers. 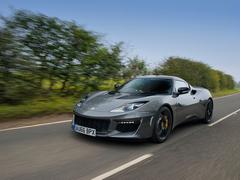 It really is hard to fault the Evora from the perspective of someone who loves driving. It won't immerse quite like a 3-Eleven or

, but then you would be far happier taking this out through Belgium for a Spa weekend. Which brings us to the price again...

Some will see £82,000 for an Evora as a lot, but as a £82,000 driving experience it looks tremendous value and certainly the Evora we would buy. The Sport 410 is 325kg lighter than an F-Type V8 by manufacturer figures, more involving than a 911 Carrera and quicker than an Aston V8 Vantage. Detractors will continue to raise the price, but this is a car so much more about the experience than the numbers.

In fact the most valid comparison for the Sport 410 would appear to be a Porsche Cayman GT4. Sure, it's new against used, but so similar are their mindsets and so numerous are the used GT4s with small mileages that it must be discussed. Prior experience suggests the Porsche possesses a nicer engine and transmission, but the Evora's dynamics would ensure a very even contest. And really the Evora Sport 410 can be paid no higher compliment; hopefully it's a twin-test that can be organised soon.

(Figures in brackets for automatic gearbox; limited-slip diff only standard on the manual also)