Sprint spec for the new Elise lightens the car by 26kg and your wallet by £5K - is it worth it?

Falling back on the stats when attempting to convey how a car goes is an obvious trap. But seeing as this is the internet and we will have to address them at some point, let's get the number crunching for the new Elise Sprint out of the way now.

You can have your new Elise as a 'Sport' in standard 136hp 1.6 naturally-aspirated or 220hp 1.8 supercharged form, the latter known as Sport 220. As a baseline the car is 10kg lighter with this facelift but for another £5,000 you can upgrade to Sprint spec on either car, potentially saving a further 26kg. By Lotus's definition of 'motorsport dry' (a tank of fuel away from driveable, basically) a 1.6 Elise Sprint weighs just 798kg, making it the lightest car homologated for sale in Europe. Options like the carbon dash, sill tops and roof panel offer further weight savings for the truly committed as well. 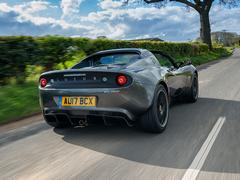 At which point you'll probably be hitting the comment button to say "Bravo, well done Lotus!" Because, as a true PH driving god, you'll recognise that fewer kilos on a spec sheet matter as much as extra horsepower out there in that 'real world'. And you'll rightly celebrate Lotus for steering us away from the pointless obsession with horsepower we can't enjoy, 0-62 times we'll never use and 'ring lap ability with no supposed relevance to driving down the shops.

Add lightness
Until such point as you set the £37,300 price for the purist-spec, naturally-aspirated Sprint against the 136hp and 118lb ft delivered by its 1.6-litre engine. How can Lotus possibly think charging so much for so little adds up in this day and age?

Time to put the spec sheet down, stop obsessing over the numbers and actually drive it. That £5,000 premium for the Sprint goes a long way to making this back to basics Lotus the truest expression of the brand's values since the original S1 Elise. It includes a lightweight lithium-ion battery, carbon fibre seats, carbon rear deck, polycarbonate rear screen, lightweight wheels and a host of detail improvements front to back. These on top of the changes applied across the Elise range, including that nifty exposed gearshift linkage - more expensive but a kilo saved in itself - a new front clam and a simpler rear end with single rather than paired lights.

The result is perhaps the cleanest and best looking Elise since that original. Cynics will argue Lotus hasn't really moved the game on since then. But with Alfa Romeo and - soon - Alpine joining the lightweight, mid-engined sports car game, Lotus is arguably well-positioned to capitalise on wider interest in such cars. 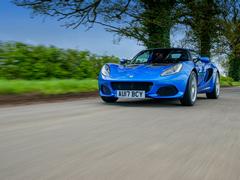 Same but less so

We'll have to see what Alpine brings to the game but from the first click-clack of the manual shifter to the weight and response of the tiny, Alcantara-clad wheel, it's obvious how much of a lead Lotus has here. Fresh out of a 4C you'll relish the simplicity of the contact points, the way feedback filters back through that wheel in a smooth flow rather than violent jerks and tugs. Plus the interaction through the manual gearbox and its beautifully positioned, beautifully weighted aluminium pedals. Yes, all three of them.

Can a car with just 136hp really prove to be the pick of the range though? It's a test of your purist convictions, for sure, but compared with the Sprint 220 on fatter track rubber the steering feels instantly lighter and more communicative. On the standard wheels the front tyres are just 175 section against the 195 of the optional Yokohama A048s, and there's a beautiful delicacy that instantly communicates the value in every saved kilo.

Remember, this 1.6 is nearly 100kg less than the carbon-tubbed 4C. OK, it's significantly down on power. But a 220hp Sprint 220 fuelled and with an averagely built driver onboard is, give or take, going to tip the scales at the same as the Alfa Romeo's claimed dry weight. Advantage most definitely Hethel. The Alpine? Another 200kg at least. 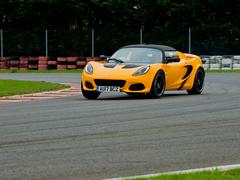 Out on the Hethel test track the 220's performance advantage basically equates to being a gear up on the naturally-aspirated car through the faster corners and up the straights. Yes, it's that decisive. If not as frenzied as the older Elise SC and Exige with the higher-revving 2ZZ-GE Toyota 1.8, this current engine has decent response and plenty of mid-range to permit hauling from a higher gear - handy because the redline often comes sooner than you'd have wanted and it's good to have the headroom in the powerband on corner exit.

Gearing is closely stacked, which is no chore because this is the best manual shift of any modern Lotus. The transverse layout traditionally presents challenges but after 20 years Lotus has nailed it, the smaller engine and lighter clutch making the shift feel shorter, tighter and more precise than in the V6 Exige and Evoras with the same set-up. It really is a lovely thing to operate, the long shifter moving precisely and the gates accurately defined as the exposed mechanism moves through its action. The click-clack of the clutch pedal going up and down and the shifter moving around all punctuate the cornering process, reinforcing the sense of connection that the paddle-operated dual-clutches in the 4C and Alpine will never be able to replicate.

Yes, it's expensive. But it is really, really good.

If it's good in the supercharged car it's even better in the 1.6. What you lose in horsepower you gain in response, the speed and accuracy with which you can rev-match your way around the gears absolutely delightful. The motor sounds better, if hardly inspirational. But the lack of inertia in the controls and car itself means tiny, detail inputs can be felt instinctively.

Grip on the narrower tyres is less than on the 220. But that brings with it delicacy and adjustability to the handling. The 1.6 moves around on its contact patches in a truly delightful fashion, weight shifts from steering and throttle inputs easily exploited to get the grip to where you most need it. That'll be over the front wheels as you approach a corner, trailed brakes helping on turn in, a lift tucking it in if you've been too ambitious. If you're heavy handed you might need a correction but the Elise's natural instinct is to pull straight and it's on the safe side of playful.

Hand on heart, if you want a car with the performance to match the looks then the supercharged 220 is the Elise to go for. But for the true believers it's nice to see Lotus offering a modern-day machine in keeping with its long-held minimalist ideals. And if you delight in the finer detail of feel and feedback the 1.6 in Sprint spec is a lesson - admittedly an expensive one - in how less really can be more.