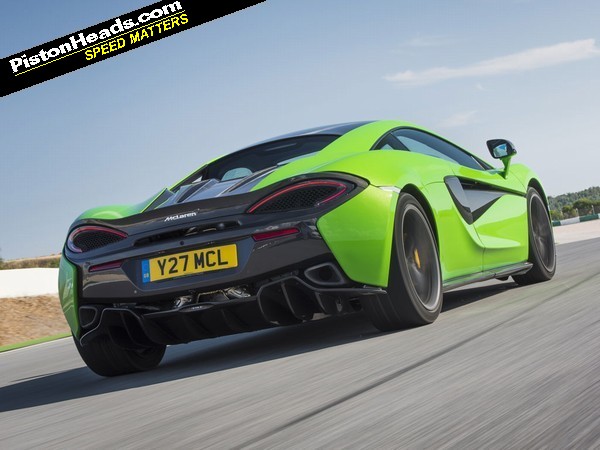 So, we know how

stacks up by the numbers. And there are PHers with money down without having read a single review. 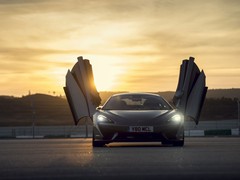 Statics impossible without the doors up

Potentially a steal for buyers suddenly offered a carbon-tubbed supercar for the price of a 911 Turbo. Or a worry if you paid the premium for a 650S Super Series seemingly sharing a common Monocell chassis and 3.8-litre twin-turbo V8. Hell, versions of the same underpin every McLaren in the range, all the way up to the £1m-plus Ultimate Series of P1 and P1 GTR. Are folk with that much invested in the McLaren dream really going to be happy the baby of the range is a chip off the same block?

Nope. So a major part of the 570S story is convincing people it's great. But not as good as a 650S, heaven forbid an LT or P1 on the cheap. 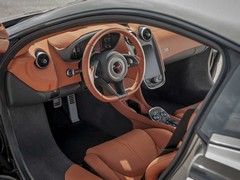 Same but less so?

Which is difficult. Because if you parked a 570S beside a 650S and asked a random which was the cheapo version they'd be hard pressed to pick it out. People aren't daft though. And nor is McLaren. The aluminium skin of the Sports Series leaves the all-carbon cachet to the Super Series but also permits a more sculptural shape that apparently could only be achieved with metal panels. With more than a hint of P1 it's a more cohesive look than the 650S, which still struggles to marry swoopy new corporate nose with original, harder edged 12C rear quarter. The floating 'tendon' in the door, flowing horizontal line from front lights to rear intake and flying buttresses are all functional as well as stylistic flourishes and help make the Sports Series stand apart. So out on the street it is both recognisably McLaren but noticeably different enough for people to recognise it as the 'baby' of the range. If such things matter to you.

Can we talk about how it drives now?

Character-wise it's instantly very McLaren. The suspension may lack the interlinked trickery of ProActive Chassis Control and relies on mechanical anti-roll bars, not cleverly pumped oil from opposing damper chambers for roll control. But thanks to the inherent stiffness of the chassis and the car's overall lack of weight - sprung and unsprung - it has that similar sense of floating over the rough stuff while keeping a clear line of communication about what the chassis is up to. Keep an eye on those settings though - Normal is plush for town and daily use but, like the 650S, it can blow through its travel once up to speed and cause nasty 'skerrrrfff!' noises as the underside hits the road surface through compressions. The increased damper support of Sport and Track settings - the latter entirely acceptable for fast road use - helps prevent this. 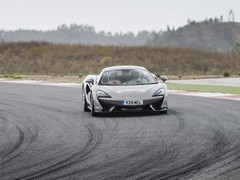 Firm hand at the wheel

Other than a quick squirt up the amusingly bumpy dual carriageway to Portimao my first real taste of the 570S is on the circuit with just a few chaperoned laps to go from familiarisation to flat out. Handily the last car I drove here was the

, a car we've already identified as a key rival to the 570S.

Immediately there's clarity in the McLaren's steering response the gluey, all-electric rack in the Audi can't match, helped by the fact it weighs 110kg less overall and the front axle isn't sharing steering and traction duties as it is in the four-wheel drive R8. The fixed ratio is faster than the 650S, now 14.1:1 as opposed to 15.3:1 and closer to the 'sharp' end of the R8's variable system. Both share a sense of accessibility though, the 570S much less pointy than the last McLaren I drove on track. OK, that was the super focused, Pirelli Trofeo-shod 675LT and there is nowhere near the front-end bite in the Corsa-shod 570S, meaning I merrily plough past apex after apex until I learn to peg it back a little. And at a more appropriate pace the 570S is as fun and accommodating as its 'entry level' positioning dictates it needs to be.

Those coming from 911 Turbos - the other obvious rival - will find the weight and clarity of the controls more familiar. But where the Porsche majors on chassis tech and four-wheel steer enhanced agility the McLaren is a much more straightforward car to understand and exploit. And again, much lighter - 164kg less in this case. 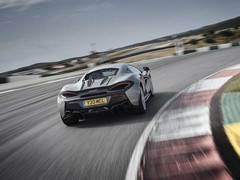 This relative simplicity is a very different ideological approach to that of its rivals; like Lotus, McLaren instinctively doesn't like locking diffs and the 570S relies on the 'too clever for F1' Brake Steer system to regulate power delivery across the rear axle. It does let you use the throttle to dictate the car's angle but it's by nature a softer response than a mechanical diff and only really noticeable in the mid-way Dynamic ESP setting. With everything on the stability control is tactful in its interventions but you can sense the 570S straining against the leash and rationing the power to maintain a neutral cornering stance. Ability to dial out the safety net of initial understeer with lifts, tucks and trailed brakes is there but subtle, the car overall preferring a neat and tidy approach. Given the complexity of what's going on underneath both the German rivals do a fantastic job of giving you plenty of feedback but when you drive the McLaren it just feels a lot more natural and predictable, even well inside its limits.

Portimao's two big downhill stops do reveal a big gap between the track performance of Sports and Super Series though. Without the active aero flipping the rear wing up into its stabilising airbrake function the unweighted rear axle wriggles around under hard braking, the 570S feeling a little more lairy and - whisper it - exciting as a result. You're trading tenths for feedback and fun but is that such a bad thing? 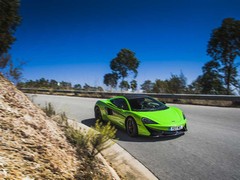 Well if silver is a bit tame...

The familiar three-stage Handling and Powertrain mode switches are there too; assuming you've got the former in Track the latter lets you choose throttle and gearshift response from the SSG dual-clutch. Gizmos include Powershift, GT3 Shift and Inertia Push strategies, the latter kicking in at over 5,000rpm and 60 per cent throttle for a surging sense of acceleration. Cylinder Cut meanwhile adds a bit of character to the proceedings, these functions familiar from the 650S and proof that McLaren is aware it needs to inject a bit of emotion into its cars.

The engine can't match the R8's V10 for charisma though. On the track you're quickly through the initial spike of boost and, once spooled up, the power delivery is resolutely linear to the extent it can almost feel a little flat. Although it revs out to 8,500 you'll not be chasing the redline in the way you would in a normally aspirated car. Nor is there a sense of crescendo like the R8's big-lunged V10 or the outrageous punch of the Porsche's variable vane turbos. Designated M838TE, it's apparently 30 per cent new compared with the 650S motor and includes different turbos, chargecoolers, heads and tubular equal length headers among its new features. But it still it sounds a little appliance-like, at least from the inside.

Road to discovery
I leave the track a little frustrated, feeling I've slightly over-driven the car in an impatient attempt to unlock its character. Maybe the road will reveal more. 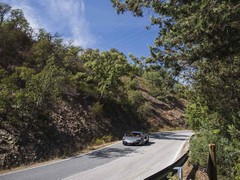 With more nuanced throttle applications a sense of that familiar McLaren power delivery is noticeable. Given the realities of sightlines and the rest you're spending more time in the transitional phase than you are in the upper reaches of the rev range. Which is exciting, because that very turbocharged whoosh is always thrilling and less on/off than the binary 911, while having more mid-range to play with than the R8.

Here on the road the ceramic brakes - the 540C gets steel ones as standard - are good but a little harder to modulate than under track pressures. You start noticing thoughtful details though, like the fact the foot rest is perfectly in line with the brake. If you're a left-foot braker it's a simple slide across to the pedal; if you're regular your feet remain aligned whichever pedal you're pressing. Little things like this and the completely unadorned steering wheel (the R8's has 14 controls, plus paddles) just hammer home the driver focus.

Without the bump smothering suspension travel of the ProActive Chassis Control again the lower limits of the 570S - all relative - become obvious, be that through a snatched brake here or wriggle under power there. It's all a little more raw, without losing that distinctive plushness found in other McLarens. But like my trip across Wales in the LT the most striking thing is how reasonable the speeds on the dial are. Sure, if you want to be really naughty the 570S will pile on the mph in a fashion that'll get your palms sweating and your passenger attempting to push foot through carbon floor. But it gives you all that feedback and excitement at relatively sane speeds too. Imagine an Elise with three times the power and you're kind of there. 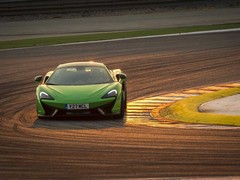 After an R8? Might be time to think again!

Once driven fears the 570S's mechanical and physical similarity to the more senior cars would blur the boundaries are shown to be false; a Super Series will still feel significantly faster and sophisticated on road or track. Whether contrived or through cost there's a sense the interior isn't quite as special as the 650S either. The McLaren minimalism is there and it still has the superb, confidence inspiring visibility. 85mm out of the reprofiled sills improves access too. But the sense of style has been diluted and it feels more 'normal' than the Super Series. The switchgear is noticeably cheaper in feel too - here the Germans deliver more in the touchy-feely stakes, if not the excitement and sense of being in a proper supercar.

And that's where the 570S will score on the test drive. The Porsche will dazzle with its complexity, opulence and gizmos. The additional seats will make it the only choice for those with need to accommodate more than one passenger, even if only occasionally. And the Audi's interior is a masterclass in style and familiarity for those who've progressed up the range, yet special enough to feel exotic and luxurious too.

But both of these cars represent the pinnacles of their respective line-ups. The McLaren? It's a first step into the realm of proper supercars. One that doesn't feel cheapened but hints at further delights for those willing and able to progress when the moment comes. £143,000 for an entry-level product - £126K when the 540C arrives next year - might sound a ludicrous proposition. But for what you're getting, yes, it sounds like a steal.