We'll stop talking about the GT3, promise ... but not until we've called 'manual or PDK'

A decade ago obituaries for manual gearboxes on fast cars were everywhere. Ferrari and Lamborghini both did away with the option of a clutch pedal, Luddite dissent marginalised by dwindling sales of three-pedal versions. The trend has since migrated downwards though, to the point where hot hatches like the Clio Renaultsport are now sold as paddle-only cars.

Porsche has stood firmer than most, it has to be said. But when the first 991 GT3 launched as PDK-only the outrage from some was matched with pragmatism by others, given it would be quicker-shifting, faster-launching and have a direct technical link to the company's paddle-shifted race cars.

But the world has turned and manuals are back in fashion again. Ferrari and Lamborghini are unlikely to ever return but those late manual cars - the very ones the sales execs advised buyers against in the strongest terms - are now trading at a sizeable premium. Aston Martin has put a new seven-speed manual in the Vantage V12 S. And now Porsche's Motorsport division has returned to the fold, offering a six-speed manual in the 991.2 GT3 as a mea culpa over the decision to deny it in the previous car. 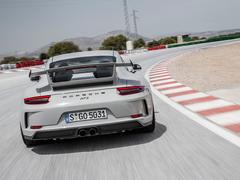 Dan got to fang the new GT3 PDK around Wales but to drive the manual I had to travel a bit further to the international launch at Circuito Guadix in Spain. The hardship.

It also gave chance to revisit discussion of the manual option with Andreas Preuninger. I start, cheekily, by reminding him that at the launch of the previous GT3 the PDK-only decision was pitched as a big improvement, largely on the basis of its faster lap times. "Well it is still faster on track," Preuninger says, "but lap times aren't everything, are they?"

Preuninger stresses his ambition has always been to offer transmission choice - "like whether you take the ceramic brakes" - but limited development resources restricted what was possible. But he admits the PDK-only GT3 displeased some traditional buyers, with the huge popularity of the manual-only Cayman GT4 - and an increase in engineering resources - making the case.

This was initially used in the 911 R, but the plan was always to spread the costs by offering it in the GT3 as well. Preuninger says he doesn't know how many people will opt for the manual - a zero-cost option tick in most territories - but reckons it could be as high as a third of production. "If it's less than 20 per cent then I'm in trouble," he admits. 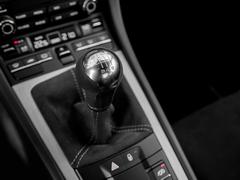 Changes over the PDK car are, predictably, minimal. The manual 'box weighing 17kg less than the PDK but lacking launch control and slower off the line. Porsche claims a 3.9-second 0-62mph time versus 3.4 seconds for the doppelkupplung. But it claws some of this deficit back, its 7.6-second 0-100mph time being just 0.3 adrift of the PDK. The need to distribute six ratios further than PDK's seven has seen the manual's gearing spread further, although that's had the side effect of increasing top speed to 198mph by a notional 1mph.

You won't be too shocked to hear that the manual GT3 is a very different prospect from the PDK. Not necessarily better, and certainly not worse, but changed in a way that redefines the character of the car.

You're kept busier, obviously. While the PDK copes well enough in Drive for low-intensity use, and requires little more than a flexed finger at maximum attack, changing gears the old-fashioned way takes fractionally longer. It's a difference that becomes obvious on track. But it's more fun as well.

The shift action feels unsurprisingly similar to the 911 R. It's beautifully weighted, accurate and has the perfect physical spacing meaning you can sense the gear the moment you touch the lever. As with every 911 you can feel the distance separating lever and selector forks so there's not the metal-through-metal sensation that comes from having a gearbox sitting directly beneath your hand.

But the gearbox works as part of a chain, one with the driver in the middle. The clutch is heavy but bites low and progressively enough to allow gentle inputs to yield superior smoothness to the PDK at manoeuvring speeds. The accelerator pedal's instant responses - and the engine's minimal flywheel effect - positively encourage rev-matching, either with just a dose of throttle, or by using the firm brake pedal as the fulcrum for some heel-and-toe work. Yes, there is a god-like electronic blipper that perfectly blends downshifts if the gearbox Sport button is pressed. It's scarily precise, but it definitely feels like cheating.

On quiet Andalusian backroads the manual is the perfect companion, every corner inspiring at least one downshift while straights permit holding a gear to appreciate the fizz of that amazing motor closing on its 9K redline. The engine's appetite for revs also simplifies tight and technical sections, where the gearbox can be left in third or sometimes even second for whole sequences without finding the limiter. 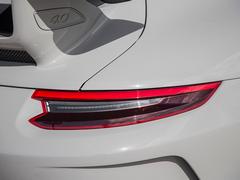 Moving to the track confirms the manual GT3 isn't quite as quick as the PDK under a full spanking. It's less the extra tenths here and there but rather the lack of tolerance for hesitation or mistakes. Which, for those who take pride in their craft, is exactly the point. PDK delivers a ratio in about as long as it takes for you to frame the thought; in the manual you'll be weighing up the time lost with an upshift against running out of revs just before hitting the brakes or whether that downshift really is necessary when the engine has so much mid-range to lean on.

If lap times and tenths are your goal then pick the PDK. Likewise, if you want to flaunt the Motorsport look in stop-start commuting traffic the temptations are obvious. It's not like the option of a manual makes PDK the wrong choice. But if you crave the involved, tactile experience (not to say challenge) 'true' GT3 fans have traditionally appreciated the manual is definitely the one. Arguably this is what the GT3 has always been about as much as outright pace and why, in my case, I'd have it every time.