What's louder - a flat-six screaming to 9,000rpm, or the howls of protest from those unable to buy one?

Look, I'll never be able to own one either. Does that make me cross? Not really. OK, I speak from the privileged position of having driven the new 'gen two'

. But I'm no closer to having one outside my house than any of those embittered types dominating the discussion of the car since its Geneva unveiling. And boy are they furious that the supposed true enthusiasts are apparently barged off The List by the hated investors, flippers, and best mates of the dealer principals.

If you're still angry about this may I politely suggest that you set up another thread and rage together at the injustice of supply and demand, the basic fact more people want a GT3 than Porsche is willing or able to build, and that life JUST ISN'T FAIR sometimes. Better you do that than read about how the car actually goes, because that's only likely to make you more upset.

Right, have the pitchfork brigade gone now? Good. Let's talk about the car. 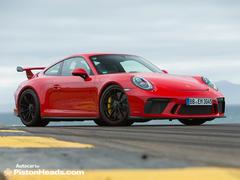 Here we go then!

from my chat with Andreas Preuninger. Highlights from that include his promise of a new and distinct 'gen two sound' from this car's motorsport-derived 4.0-litre flat-six. If by that he means it feels like your head is inside the crankcase as it revs to 9,000rpm and shrieking pistons, cams and valves are going to make your ears bleed then he's right.

Basically if you like violently loud music, played by sweaty men with long hair and low-slung guitars, then you're going to love the GT3. At full chat this is a full-on assault on the senses that'll leave your palms a bit sticky and your ears ringing with the joyous sound of a very, very high-revving naturally-aspirated motor screaming up to a sky-high redline.

It's shocking to realise the GT3 is now the only 911 in the range with an atmospheric engine. Perhaps that's one reason for the broader customer pool and heightened interest in what was once a very niche product in the 911 range. PDK helped democratise the GT3 for those who'd never have gone near previous examples, or perhaps said "sod that, I'll have a Tiptronic Turbo" when they stalled it against the hair-trigger clutch on the dealer forecourt. That nature restricted previous GT3s to those who really, really wanted them. But post-991 anyone could purr around town in a winged'n'caged 911 living the 'because motorsport' dream, GT3 now seemingly the automotive equivalent of putting on your gym kit to visit Starbucks. 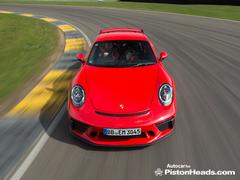 Slightly different, still very much a GT3 though

You even lift, bro?

This new one seems an appropriate response. It's back, angrier and louder than before, and if you want that manual gearbox you can now have one. Just not in our test car, which despite all the hype arrived from Germany with PDK.

If you managed to get past the opening paragraph of our GT3 unveiling story without throwing your coffee cup across the room at the injustice of it all, you'll have understood there's a lot more to this new version than meets the eye. The front-end styling has been cleaned up a tad and the vent on the rear valance moved up onto the engine bay lid. Fundamentally it's the same GT3 though, but with brakes, steering, springs, dampers and control systems all fettled and tweaked for detail improvements.

The bigger upgrades are in aero and that engine. Where the first gen GT3 had the same underbody as the regular Carrera, 'tricks' learned from the wingless R have been added to this one and increased downforce by 20 per cent with no extra drag. Looking at that long, fast right-hander at Anglesey that's rather reassuring. Because if it goes wrong there they'll be calling the lifeboat, not the recovery truck. 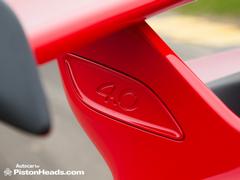 Here's where the big change lies

Tricks of the trade

That engine is the real star though. Now a 4.0-litre, it matches the RS and R for capacity but has a broader power band - and greater appetite for revs - having ditched hydraulic valve adjustment for purely mechanical operation. That reduces oil pressure and friction, improves response and frees up 9hp on its own. And contributes to that 'gen two sound' Preuninger is so proud of.

This is a properly visceral car too. You're not even out of the pitlane before the focus and seriousness envelopes you and sets you on a path to rinsing every last ounce of performance from it. Even into the first corner and on cold Cup 2s. The manual will be interesting in this car, given it's 17kg lighter in the rear and has a more direct feel from its mechanical limited-slip diff, according to Preuninger.

Whisper it, but PDK actually suits it rather well though. This is a dual-clutch transmission unlike any other in a regular Porsche, savage in its shifts in PDK Sport and with an audible hiss and clank of actuators and mechanical bits that sounds and feels more like a race sequential. Which is probably no accident. The lower ratios are nice and close too, meaning you're constantly up and down through third, fourth and fifth and enjoying the epic reach of that motor in every single one. 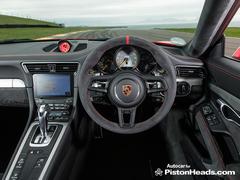 Everything about this car signals intent, from the stiffness of the cage-reinforced shell to the splatter of gravel in the arches. As part of efforts to keep the weight to the same 1,430kg unladen as the gen one there's less sound deadening, hammering home that hardcore vibe. It turns in with an assertiveness you just don't get in play-it-safe Carreras, the four-wheel steering speeding the rotation into the turns on slower corners and addressing that traditional 911 front-end push. The weight and response are very good by EPAS standards and the calibration very smart but the more flowing, natural feel of the 996 and 997-era cars is long gone. It's as good as you could hope for though. And, oh my god, THE NOISE!

The 4.0 has noticeably more grunt than the 3.8 and is tractable enough to haul from a higher gear than you might otherwise have chosen. But the temptation to flick the left paddle and drop into the noisy bit of the powerband is hard to resist and you'll still have plenty of revs to play with as it rips around to 9,000rpm. Those final 3,000rpm - yes, the best stuff STARTS at 6,000rpm - are just incredible and a reminder that no matter how good turbo engines get, they'll never set the neck hairs on end like this. True, it's not the afterburner acceleration you get from a forced induction motor, but the sheer reach of that powerband more than makes up for it - the accuracy with which you can meter it delicious and the response addictive. I mentioned the noise, right? 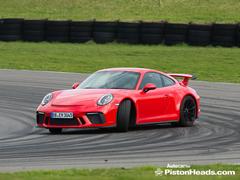 "Why are you drifting? I am a speed machine!"

In driving style this is a proper 911 too, in that the front end needs settling before you commit to the throttle if you're to avoid understeer. Your options for that are various though. Trail the brakes in or lift a tad and the GT3 quickly asserts that famous pendulum effect, from where it's your decision on how to proceed. Preuninger's assertion that the safety nets are a 'loose bungee' is no understatement either. Even on a dry track and on warm Cup 2s if you provoke the GT3 you need to be ready to deal with the consequences. And if you're clumsy enough to require an intervention it's ugly and embarrassing, like the car is groaning in disapproval.

On your own, son
Meaning the real GT3 is only uncaged when you man up and turn everything off. You may be on your own but this is how the car was developed and it's actually easier to be smooth with the corrections when they're all your own work. Attempts to showboat for the camera are met with mixed results - this isn't the GT3's comfort zone - and it's far better in that glorious transient realm where you're slowly winding off the steering, rather than grabbing armfuls of opposite lock. 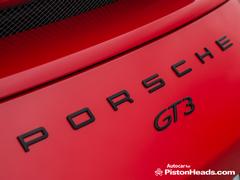 Getting one? You're going to love it

The perfect high-speed corner in a GT3 is one where your trailed brakes nail the nose into the apex and your bravery with an early throttle holds that neutral stance all the way out to the exit kerbs, a whiff of overspeed from the rear tyres and the revs screaming towards 9K. But you absolutely need to be on your game to get that each and every corner and it's less happy in the slow ones. Chasing that sensation is what makes this car such an inspiring machine to drive hard though. At no point does PDK seem like it's limiting my involvement in what the car is doing either.

Yes, it's worth the fuss. Because in the GT3 lies the beating heart of the Porsche 911 and the raw spirit of what makes this unique car so captivating. To the point where the rest of the range just seems a little emasculated. Romantically you want to think THAT is why everyone wants one and they'll all be driven this way, much as the previous generations of GT3 were.

And if that's not the case and the conspiracy theories about flippers, posers and favoured customers are true then you'll find me with the pitchfork brigade.

Want to see it in action? Watch our video review!

Figures in brackets for manual, where different