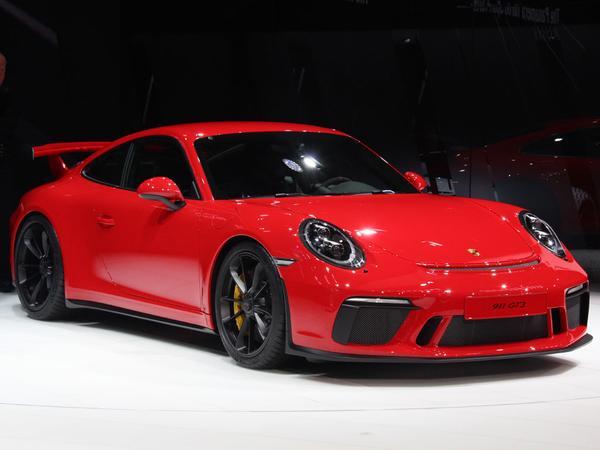 No turbos, a 9,000rpm redline from a 4.0-litre flat-six, 500hp and a no-cost manual option. Yes, Porsche has responded to outcry over the

and limited availability of the manual-only R and given fervent stick-shifters the opportunity to put their money where their mouth is.

Will they? The sales split will make interesting viewing but the bigger story with this new GT3 is actually its engine, the most exotic, highest revving and most extreme version yet of Porsche's current Motorsport flat-six with a power delivery promising to make the RS feel a bit diesel-like in comparison. Put it this way - where that car reached its peak at 8,250rpm the new GT3 has got another 750rpm to go. 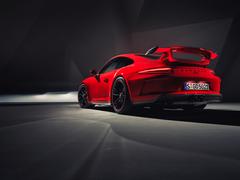 PH was lucky enough to get the full geek-out on the new GT3 with Andreas Preuninger ahead of the show reveal. And after an hour's private audience it's safe to say he's not kidding when his recurring theme is "more than meets the eye". Want the full, unexpurgated transcript in its near-6,000 word glory? Not a problem - you can read it

. Here, in the meantime, are the (slightly) edited highlights.

500hp is the headline, the PDK version a token tenth quicker to 62mph than the gen one GT3 and a smidge faster at the top end at 199mph. With one ratio less and the lack of launch control the manual is half a second slower to 62mph at 3.9 seconds but pulls a small extra margin at the top end to record 200mph thanks to reduced mechanical losses. Despite weight increases to the body in white the overall DIN kerbweight (minus driver) remains at 1,430kg even with all the four-wheel steering and other gubbins.

The manual is 10kg lighter and gets a mechanical limited-slip diff rather than the fully active one integrated into the PDK transmission. It doesn't get the lighter single-mass flywheel of the R but Preuninger's enthusiasm for the way it'll pick up from as low as 2,000rpm and rev - in his words - "explosively" through to the 9,000rpm redline is utterly infectious. Granted, some owners of early 991 GT3s may cock an eyebrow at his choice of adjective there. But we'll work on the basis that that particular flaw has been dealt with this time. 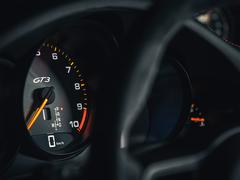 More on the engine though. New features include a stiffer crank (hence no single-mass flywheel) with central oil feed to the bearings, new ram air intakes and low-friction cylinder liners. But it's the new head design Preuninger is most excited about. Ditching the hydraulic valve adjusters means lower oil pressure, reduced stress on the valvetrain, less friction, less inertia and a simpler mechanism for operating the valves. Which basically equates to more revs and more power - up to 9hp alone from the new mechanical design.

With the finger followers now operating the valves directly the clearances are shimmed when the engine is built ... and that's it. "We ran one engine on the dyno for 300,000km and it did not change, not one half of a tenth," says Preuninger. "And we did it several times - owners do not have to worry they have to go to the dealer every 10,000km to adjust the shims!" Here's hoping.

"The car really goes," he grins, quite possibly understating things somewhat. "The 4.0-litre displacement really helps with the mid-range 'snap' but if you are in a 180-degree bend and have maybe 2,000rpm when you go on the throttle the bandwidth of revs is just mind boggling!"

The seven-speed PDK is updated from before with even faster shifts and new software. The manual is the six-speed from the R, which is no bad thing with its closely stacked lower ratios and short-throw shift. Preuninger accepts it is slower round the track than the PDK but satisfies the "new found niche" for purists seeking a more immersive experience. "We will satisfy the demand of all those people who didn't get an R, and this is I think the right way to do it," he says, pouring a hefty can of petrol on an alreadyheated debate. 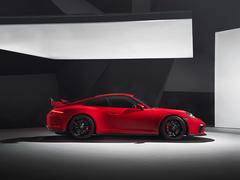 Weight remains at 1,430kg without driver

Further R influence can be found in the improved aero. You'll see the reprofiled (and lighter) front bumper; new blade-like surrounds to the intakes reduce drag and smooth the airflow over the sides while underneath there are fences and vortex generators developed for the wingless R to speed the air going to the rear diffuser. As a result the fixed wing can be moved rearwards by 10mm and up by 20mm to reduce drag, sharing the workload with the diffuser. Result? 20 per cent more downforce at top speed - equivalent to a gen two 997 RS in fact - with no increase in drag coefficient.

Elsewhere the changes are more detail than those made to the powertrain and aero. Brakes remain standard steel (380mm on both axles) or PCCB with 410mm front and 390mm rear - Preuninger says braking performance is the same but PCCB's reduced unsprung weight is worth having. And that they look cool. The PASM dampers have been revised with a greater bandwidth between comfort and Sport settings, RS-inspired helper springs on the rear struts a further upgrade. Stiffer front bushings are fitted to improve steering response and the EPAS has been recalibrated too. "On the gen one it was great, on the RS even better and on the [Cayman] GT4 super cool," says Preuninger. "Everyone commented it was a dream on the R and this is the next step in feel and feedback, the best we've had so far." 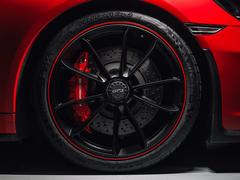 Hopefully this lip can be removed...

Trim updates include '3D' Alcantara on the seats, a new red rim on the wheels and, naturally, the updated PCM from the facelifted 911 range. Overall the look is cleaner and relatively underplayed for a GT model, perhaps closer in spirit to the original 996 versions. But under the skin it sounds properly wild.

Meaning you're going to have to hurry if you haven't already started the charm offensive with your OPC, the official rrp of £111,802 sounding almost reasonable when you consider a Carrera 2 GTS coupe starts at £94,316 and could easily be in the same ballpark with a few options. Official line is production isn't capped by anything beyond capacity, equivalent to around 4,000 units of the gen one. Hardcore or not, the GT3 is now more accessible to a broader range of customers than ever before though. So you can expect demand to comfortably exceed supply.

But the big question. PDK or manual?