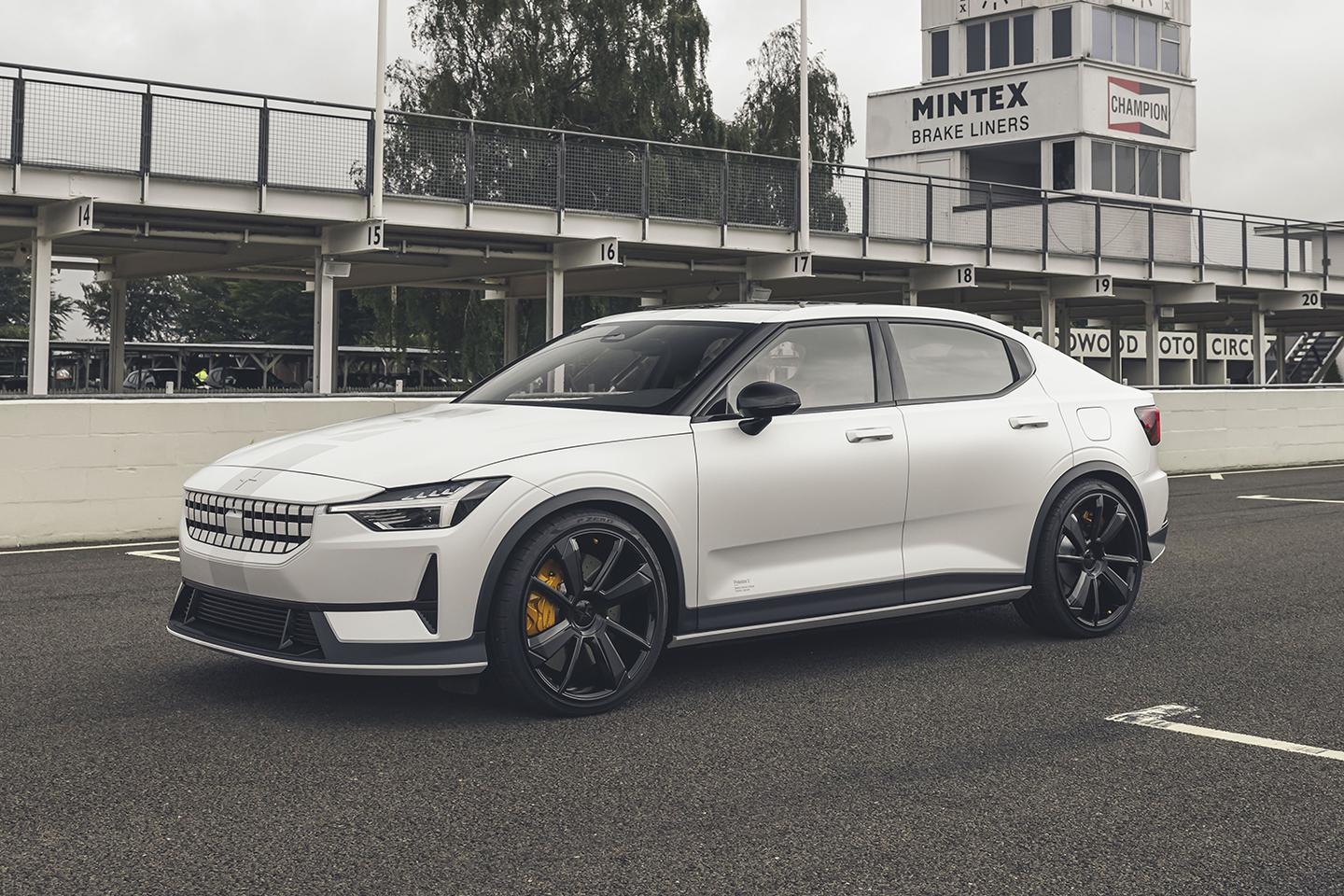 The manufacturer might have given it a desperately uninteresting name, but internally the Experimental Polestar 2 has been dubbed 'Beast' - and nicknames are almost always a good sign. Officially the one-off model is linked to CEO Thomas Ingenlath's "desire to push the boundaries of the electric fastback's design and performance potential". Really though it is about having something cool to run up the hill at Goodwood this weekend.

Which was clearly fine with Joakim Rydholm, the firm's hugely likeable Chief chassis engineer, and the man responsible for defining Polestar's dynamic identity since virtually day one. Being turned loose on side projects is manna from heaven for most engineers, and given roughly eight weeks to play with, Rydholm cheerily went to town on what is otherwise a fairly conservative five-door EV.

For what it's worth, ahead of an official introduction PH met the Experimental model in a Goodwood circuit car park filled with other examples of the Polestar 2 - but hardly needed telling it was special. It's as plain as the Magnesium Matte racing stripe on its bonnet. For a brief moment the Beast brought to mind another one-off model Polestar was responsible for - the 508hp turbocharged straight-six concept it produced as a one-off commission for some madman in the States a decade ago.

Of course that was a different Polestar, and a very different car. But with the track (and wheel arches) pushed out 10mm either side and the ride height dropped by 25mm onto 21-inch alloys and 6-piston Akebono brakes, you don't need much more than a glance to know the Experimental's tweaked bodywork is concealing a decidedly trick chassis.

Power is up, too, though not dramatically. The AWD Long Range Dual motor model now produces a combined output of 476hp - up 76hp from standard. Sufficient for a definitively firmer shove on the solar plexus, but not enough to easily overwhelm the wider 275-section Pirelli P-Zero Rosso tyres carried over from the Polestar 1. It was important to Rydholm that the Beast remain well-resolved and faithful to itself - this is about flexing muscles, not fitting new ones.

Still, when you've opted to fit gorgeous three-way Ohlins dampers, and uprated the suspension stiffness by 80 per cent at the front and 40 per cent at the rear - and vanquished stability control completely - it really is a case of same kettle, different fish. From the passenger seat on the notoriously fast circuit, which Rydholm had familiarised himself with a nanosecond beforehand, the Experimental was very obviously turning into corners (and speeding away from them) in a wholly superior way to the standard Polestar 2 PH had briefly driven round 10 minutes earlier.

As ever with these things, it's the quality of the body control that staggers when you're not holding the steering wheel. The Polestar 2 is equipped with manually adjustable dampers as standard, and certainly makes a fair fist of dealing with its not inconsiderable weight - but the Beast is on a wholly different level; stiff enough to carry huge speed through its fattened up footprint, yet wonderfully accommodating of Goodwood's undulating surface at the same time.

When Rydholm is done enjoying himself, he shows off the secret-weapon Ohlins and points to the carbon fibre front strut bar the team fitted to enhance rigidity and steering feel (there's another located at the back, too). Apparently they went through 12 variations of weave before landing on the perfect one for the job. The Experimental reflects that intriguing level of detail; not too hot, not too silly - maybe just right.

Which does make the Beast's one-off status slightly galling. But Polestar isn't hanging around long enough for you to hold anything against it. The other star of its Festival of Speed is the very handsome indeed Precept concept - a design study that points to where the firm is heading in the very near future. If, when it gets there, it has managed to combine those sleek styling cues with the sly sense of fun evidenced by the Beast, we might have another Polestar worthy of a new nickname.