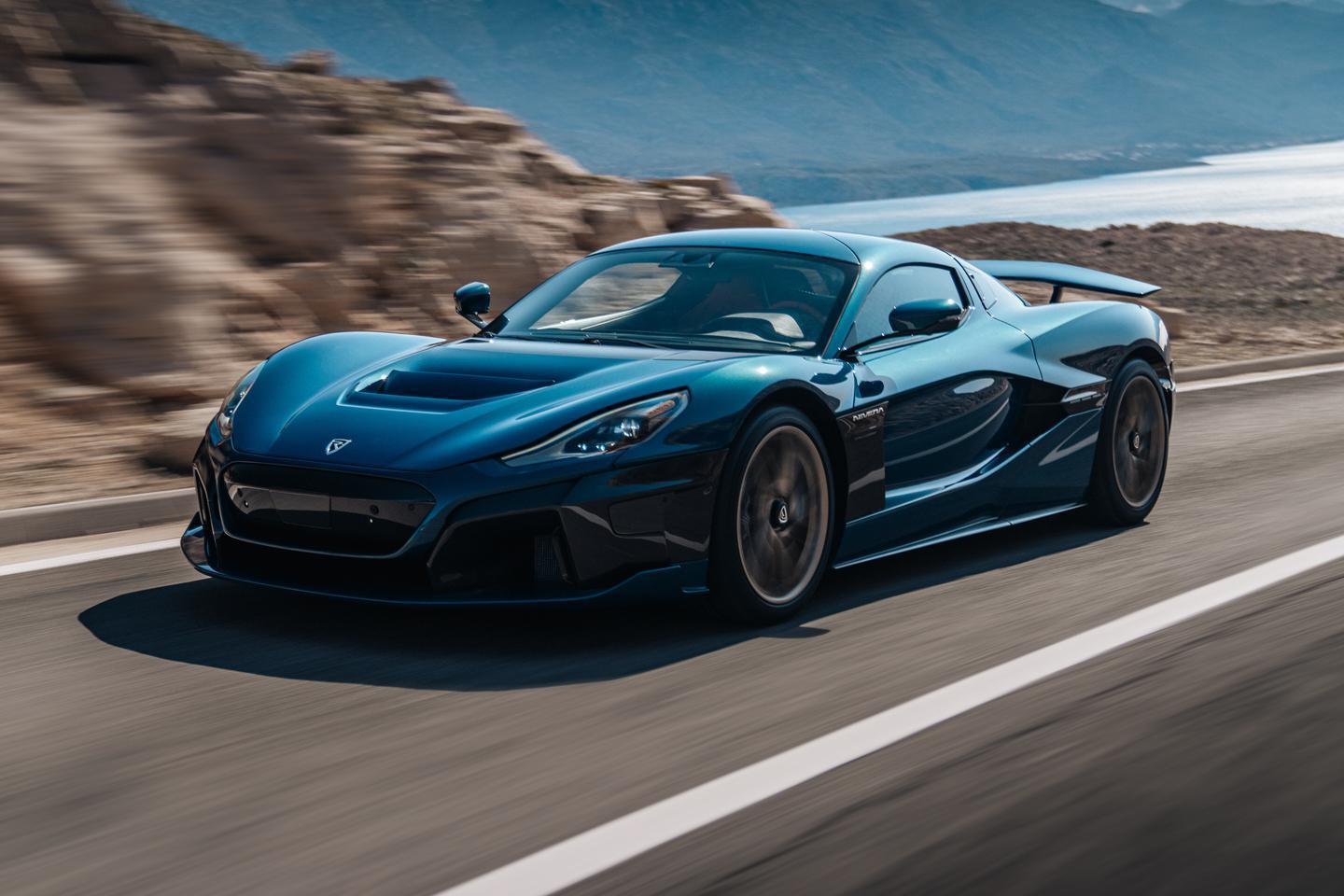 Fans of big numbers look this way. Rimac has christened the production version of its C_Two as the Nevera, with 1,914hp, a 258mph top speed and a WLTP-certified 340-mile range. Using four electric motors and a 120kWh battery, the €2 million hypercar can sprint from 0-60mph in 1.85 seconds and 0-100 in 4.3 secs. Even more incredible is a claimed 0-186mph time of 9.3 seconds, which is 2.5 seconds quicker than Rimac's initial target and a staggering 4.3 seconds quicker than a Bugatti Chiron.

The quad-motor setup generates 1,741lb ft of instantly available torque, driving through a pair of single-speed gearboxes with a 97 per cent efficient delivery of power. Rimac claims a record-breaking production car quarter mile time of 8.6 seconds, 1.6 better than the Dodge Challenger Hellcat Redeye, from its 6,960-cell battery hypercar, not to mention a level of dynamic performance claimed to go beyond the current generation of supercars. Much is owed to the architecture, which is the stiffest yet in a production car thanks to its single-piece construction. In fact, it uses the largest single carbon fibre piece yet created for a road car.

Weighing less than 200kg, using 2,200 carbon fibre plys and 222 aluminium inserts, the monocoque integrates the in-house developed lithium, manganese and nickel battery into its structure, enabling a torsional stiffness of 70,000 Nm/degree – which, if you’re wondering, is said to beat the Chiron by 20,000 Nm. It also helps to keep weight low and give the car a 48/52 front-rear weight-distribution, which ought to aid handling. As will Rimac’s second-generation all-wheel torque vectoring tech, which does away with conventional stability and traction software as it can independently control each motor, making over 100 calculations per second.

With a 500kW charger, the battery can be taken from 0-80 per cent in 19 mins (with that we’d estimate a sub-30 min time on a 350kW plug). The regenerative technology aboard is equally big-hitting, with regenerative braking of up to 300kW provided by the electric motors, which are backed by 390mm Brembo carbon ceramics with six-piston calipers. The anchors are electro-hydraulically boosted and offer feel via a ‘feel simulator’, which juggles motor and pad-to-disc feedback. Rimac claims consistent, fade-free braking, even when being thrashed on track. As for the weight the brakes have to stop, we’ve not yet given an official figure for the Nevera. Although we know the C_Two concept weighed 1,950kg.

Apparently, the Nevera is to be as much a comfortable grand tourer as it is a scintillatingly quick hypercar, with double wishbone suspension and electronically controlled damping providing a wide-window of vertical control. The ride height is active, too, enabling what Rimac itself describes as a “smooth and comfortable ride, exemplary body control and ultra-agile handling”.

Rimac states that the Nevera body is 34 per cent more aerodynamically efficient than the first concept, with a drag coefficient in the car’s slipperiest mode of 0.3. Conversely, in high downforce mode, aerodynamic load increases by 326 per cent. Rimac even claims a 30 per cent improvement in powertrain and brake cooling compared with early prototypes, such has been the progress during development. It’s not clear whether innovations like these have been helped along by Porsche’s increased investment into the Croatian firm, but it can’t have hurt.

Elsewhere, the car comes packed with tech, including a full range of driver assistance features, utilising 12 ultrasonic sensors, 13 cameras and six radars, as well as the NVIDIA Pegasus 'self-driving' operating system. The tech's inclusion isn't aimed at motorway journeys but rather the on-track stuff, where a 'Rimac Driving Coach' can provide real-time tuition, via audio and visual guidance. It'll be launched in 2022 and added to existing cars via an over-the-air update. High-tech stuff, although the Nevera does pleasingly still get some physical buttons - billet aluminium rotary controls - in its cabin, for added tactility.

"This is it. This is the car I had in mind when I embarked on the 'impossible' journey ten years ago," said CEO Mate Rimac of the finished machine. "All our hard work has resulted in the the Nevera - our record-breaking hypercar. This car was born to outperform, and to raise the bar, redefining the norm for performance cars. And not only in performance - but as an all-round package."

As you'd expect, each Rimac Nevera can be produced with a wide range of bespoke options for customers, although there are three specific grades available for those who prefer to let the factory do the choosing. They are callede GT, Signature and Timeless. No matter what Nevera guise a customer goes for, they'll be invited to Croatia to help design the final spec. If that has you sold, cars can be ordered via Rimac's global dealer partners network, which has 19 sites across all major regions, including Europe and the Americas, as well as the Middle East and Asia. Expect a disorderly queue to form immediately.