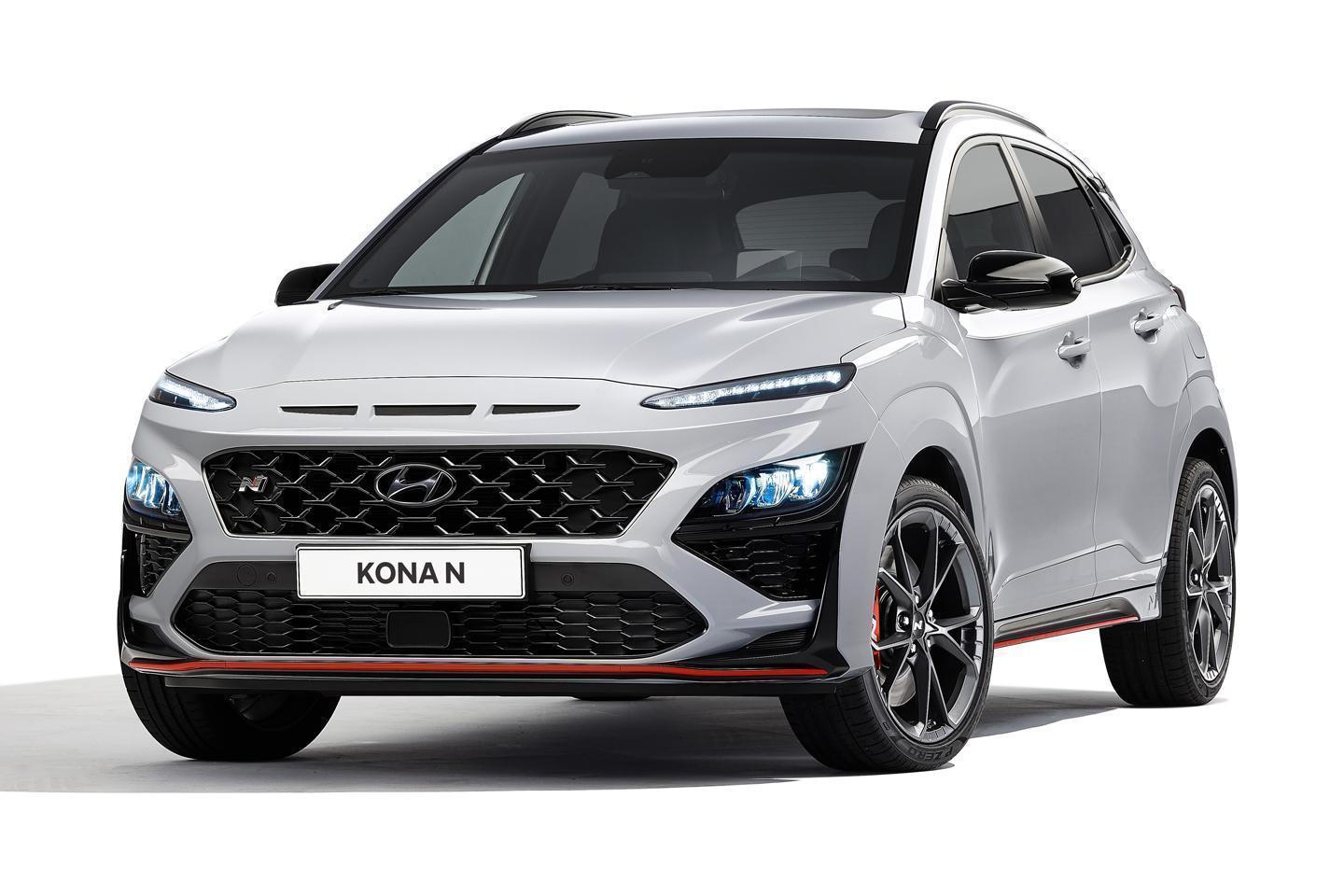 Hyundai has revealed the production version of its Kona N performance SUV, with confirmation that it produces 280hp from its 2.0-litre T-GDI engine. Except it doesn’t, not all the time at least; thanks to the default fitment of an N DCT eight-speed automatic gearbox, Hyundai’s first hot crossover will boost to 290hp during flat-out upshifts, via the ‘N Grin Shift’ tech. The powertrain also has 289lb ft of torque, affirming that this is an offering to sit comfortably above the Ford Puma ST, but below the all-wheel drive T-Roc R. The Kona N is front-drive only to save weight – and, of course, keep it technically tied to the i30 N. Which is absolutely no bad thing.

While Hyundai admits that buyers of the Kona N will have many different uses for their car (think active, lifestyley ones), it promises the same level of fun as the more focused N hot hatches. R&D boss Albert Biermann, formerly of BMW M and responsible for the excellent i30 N, said during the Kona N’s digital reveal that engineers first dropped the car by 30mm and went quite extreme, but he asked them to dial it back for greater usability. This is supposed to be a car capable of carrying the family off on holiday as well as doing track days, we’re told.

That somewhat emphasises the challenge engineers faced, given that the Kona base, let’s face it, is a more compromised foundation than the established i30 N and just-launched i20 N. The punchy turbocharged four-cylinder engine, which is 5hp and 29lb ft more potent than in the i30, enables a 5.5-second 0-62mph time and 149mph top speed. Additional changes for the Kona N include different steering hardware and bespoke all-round suspension, including the multi-link setup at the back. There are the same modes for the adaptive damping and mechanical limited slip differential as the i30 N, but obviously their tuning is unique to the 1,510kg Kona.

Now, it’s entirely possible that engineers have altered the settings since we drove the prototype, but even allowing for minor changes, it was clear in January that the Kona platform had been positively overhauled with those modifications. The inherent firmness in the structure made for a busy ride at low speed that improved with pace, and the car had body control that surpassed even that of the Puma ST. Even if engineers have applied some mild alterations to the final settings, it’s still clear that Hyundai is targeting drivers who want the front-axle communication and off-throttle adjustability of a hot hatch from a higher vantage point, rather than just an aggressive looking crossover that makes a bit of noise.

It also seems clear that Hyundai has done its best to bundle in as many extras to the Kona N package as it can. Adding to the standard-fit launch control system – which we tested and liked a lot on the prototype – the car gets 19-inch wheels, a 10-inch digital instrument cluster and infotainment system of the same size, as well as a head-up display and N division seats. The exterior bodykit – which isn’t exactly new because it’s largely shared with the N Line model – certainly adds presence, while the racy N exhaust note will hopefully be as loud as ever. Perhaps most surprising of all is Hyundai’s decision to retain track-honed settings for the N mode, which in the prototype stiffened and sharpened things up to a point that made the car too extreme for the road. Biermann claimed this is a car capable of proper circuit work; the front grille openings are widened for enhanced engine and brake cooling to assist that.

You even get 235-section Pirelli P-Zero tyres and track-capable brake pads, although it’s not yet clear whether Hyundai will offer its track day-friendly warranty, as it did with the i30 N. It would certainly be a signal of intent, but one probably less likely to be actually called into use with an SUV - though we’d gladly be proven wrong on that one. Not least because all things suggest this will be another fun offering from the N division, one to help expand the division’s presence and provide buyers an alternative to the hot hatches. The Kona N doesn’t look to have any direct rivals yet, either, with an anticipated £30k price placing it in a window smack bang between the aforementioned hot Puma and T-Roc. Value has always been a strong suit of the Hyundai N cars, and it looks this could be the case once more for the Kona; we’ll know more when we get our hands on a production car in the coming weeks.