Dutch designer Niels van Roij turns his hand to the Tesla Model S, with up to 20 being made 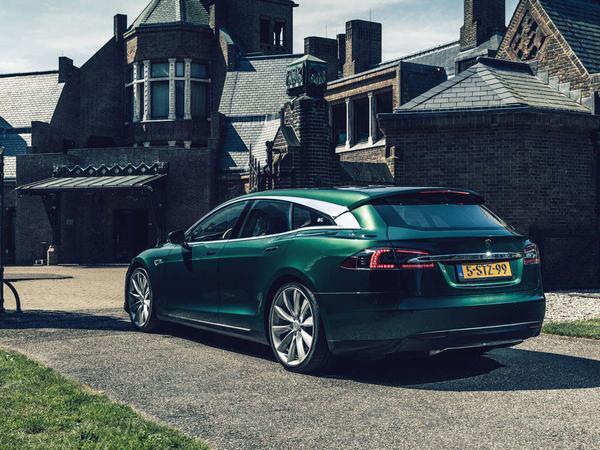 Who knew how similar the Tesla Model S could be to a bus? They're all over London, they all mostly look the same and - when it comes to estates, at least - you wait for ages and then two come along at once.

Those keen on Teslas will be familiar now with the work of Qwest Automotive, the Norfolk-based team who converted a Model S to a Shooting Brake last year. Now a team led by Dutch designer Niels van Roij, with funding from Floris de Raadt and building expertise from RemetzCar, has built their own version.

Autocar reports that the car will not be a one-off, and that around 20 will be produced. With 500-600 hours of sketching alone behind the Model S, van Roij collaborated with the team best known for building stretched cars for the King of Holland: "The client knew them and proposed them. They had the skills to do everything by hand, from beating the aluminium into shape to working with the glass to achieve the huge roof shape. Everything we have added is sculptural; nothing is there for the sake of it." So before any accusations are made, that's straight from the horse's mouth...

While the current spec reflects the wishes of de Raadt - apparently a lifelong shooting brake fan - van Roij says that the project "may want to go in different directions" if there are more customers forthcoming.

They may well be, too, as according to Autocar the price is claimed to be "little more than the cost of a new Model S". Of course as a bespoke coachbuilt project, more money can certainly be spent, although van Roij stated that parameters for every aspect of the build, including budget, have been in place throughout the project.

Quite where you will actually buy a Dutch Model S Shooting Brake from isn't quite clear yet, although the finished product does look very impressive. More details to follow when they're available.