Hyundai i30 N in the VLN 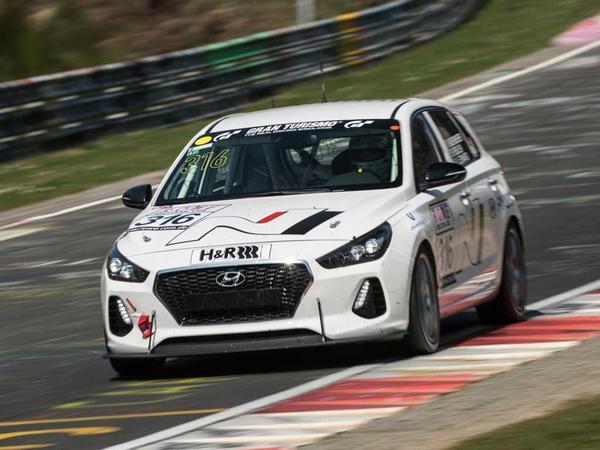 Hyundai is certainly taking its time over its Golf GTI rivalling i30 N. Given what it's up against you'd generously consider that a good sign, indicating this is no half-hearted effort.

The signs have looked promising too. With ex-BMW M man Albert Biermann in charge of both this and the Kia Stinger the Koreans have some local expertise to take on the respective German benchmarks (the 3 Series of Biermann's former employers in the case of the Stinger) and the testing has certainly been thorough. OK, so getting Hyundai's team WRC star Thierry Neuville to say nice things about it after skidding it around on ice is fairly standard PR puff. Entry of what looks like a near-production ready car into the VLN to qualify for the Nurburgring 24-hour, however, is rather more serious. 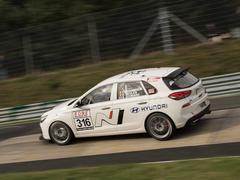 Road car for the race track!

With a development base beside the track and previous experience of factory-entered cars in the race it's clear Hyundai sees value in testing its new hot hatches in the heat of battle as well as in the industry pool sessions. Cue Nordschleife cynics saying fixation with 'ring development ruins road cars, those with more knowledge of the place countering that the twists, cambers and bumps of the track actually result in B-road capable cars. The more compliant chassis settings of 'ring record hot hatches like the Ohlins-damped Megane Trophy-R and hidden 'Nurburgring mode' on the Golf GTI Clubsport S would appear to back that up too.

10 months ago we were in the same place and confirming a power output knocking on 300hp, the possibility of two levels of trim and spec and the fanciest of the two getting some form of locking differential and active dampers. That's about where we are now too, the i30 that raced last year at the N24 showing good lap pace, even if it was ultimately beaten by a Veloster, a GT86, a Mini and a Fiesta.

That car was seemingly a 1.6 though and kitted out with more serious aero; this year's race car looks more stock and uses a 2.0-litre engine and six-speed manual Hyundai says is "the same powertrain and transmission set-up that will be used in the production i30 N". Inevitably the purpose of the exercise is to "identify areas for further refinement and potential performance enhancements" as much as race for places.

With a global launch pitched for later in the year - place your bets on this being Frankfurt in September - it'll be interesting to see how this experience informs the finished product. With the Civic Type R and the all-new Megane Renault Sport on the way too it looks like the hot hatch sector is due to get hotter still. With the latter rumoured to be following the Clio and adopting dual-clutch only transmission Hyundai's decision to stick to with the stick could prove to be a prescient move too. More when we have it.