Generally speaking I’m not a fan of this dredging up old names ruse. What on earth’s a Lea Francis for example? Is it anything to do with Lea and Perrins Worcestershire sauce? And now there’s a name from biking’s past about to come back: Ariel.

Now normally this news would inspire a yawn and a turn of the page, but this is Ariel as in Ariel Atom, and as in Simon Saunders. I’ve known him for donkey’s years and he’s a proper bike enthusiast. (He rides the same ZX-9R that he’s had for years).

Not the new Ariel motorbike...

Simon’s plan is to build a bespoke bike around a Honda engine. He’s not saying which engine, but since he already has a tie-up with Honda for the Atom, it’s a logical choice. The bike will cost around £20,000 and will be built for each owner with a choice of handlebar heights, foot peg placing and seat height. ‘It won’t be a superbike,’ the man says, ‘something much more useable and fun than that.’

The important thing is that there’s no talk of resurrecting old nails like the Ariel Square Four (1931-’59). Good ideas are one thing, carrying them out is another. Remember Al Melling? Now that bloke can talk good horsepower but when it came to reviving Norton and building his own car nothing came of it. Mr Saunders has the track record and knows how to make things and make money at the same time. 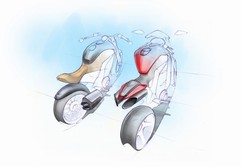 ...but this is it. Officially rendered.

The Ariel is a fantastic piece of kit (

except it doesn’t lean into corners

), but equally impressive is the fact that Simon has been able to make money from building and selling them.