Take a dive into the technology synonymous with performance and power 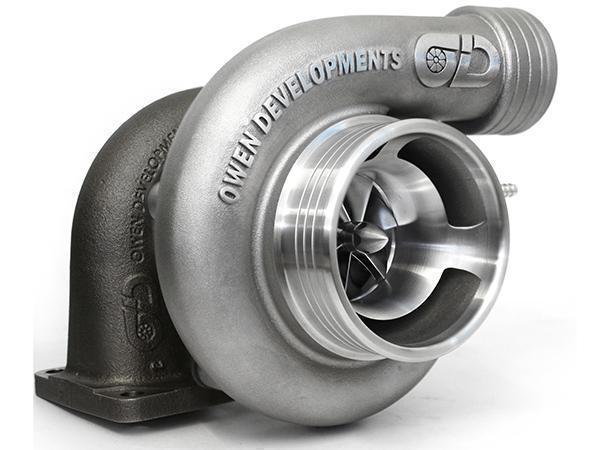 Ever since the first internal combustion engine clattered into life, engineers have sought ways to make its successors more powerful - and using a turbocharger is a common way to boost the output of a petrol or diesel engine.

What is a turbocharger?

A turbocharger, or turbo, is an air pump that drives additional air into the combustion chamber mixing with the injected fuel to increase air and fuel into the engine - which in turn increases the amount of power the engine is able to generate.

How does a turbocharger work? 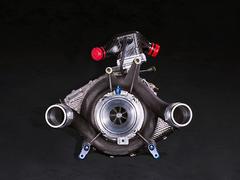 In a naturally aspirated engine, air is drawn into the cylinders by the pressure drop created when a cylinder falls during the intake stroke. A turbocharger, however, is a form of 'forced induction' - because it compresses air, or a fuel-air mixture, into each cylinder. More air means more oxygen, which can be burnt with additional fuel to produce more power.

In essence, a turbocharger is an air compressor and a turbine bolted together. The 'hot' side consists of a housing containing a turbine wheel, through which the engine's exhaust gases are passed. The 'cold' side contains the compressor wheel, an air inlet and a discharge port.

When the engine is running, its exhaust gases drive the turbine, which causes the compressor to spin. This compresses the air that's being drawn in, then this high-pressure air - at a 'boost' pressure, above atmospheric - is sent to the engine. 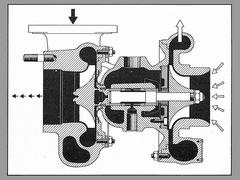 In the middle of the turbocharger is the 'core', which supports the main shaft with a bearing and locates both sides of the turbocharger. The bearing is lubricated by a supply of oil from the engine, essential considering that turbochargers can hit 300,000rpm. Some may additionally feature water cooling, in order to help control temperatures.

Most conventional turbochargers also have an internal wastegate. This is a pressure-activated valve which controls the maximum boost level. As the turbocharger speeds up, producing more boost, excess pressure causes the wastegate to open - causing exhaust gas to bypass the turbine, slowing it down. Without this, the turbocharger would simply keep accelerating, eventually causing damage to itself and the engine.

Being driven by the engine's exhaust gases is also what primarily differentiates turbochargers from superchargers; a supercharger is a compressor that's typically driven directly by the engine, through a belt or a gear drive.

History of the turbocharger 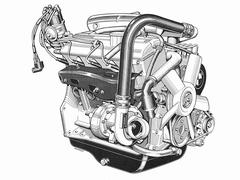 The first turbocharger was patented in 1905 and the technology became popular in industrial and military applications. It took until 1962 for production turbocharged cars to arrive, though, with Chevrolet unveiling its Corvair Monza Spyder in 1962 - closely followed by the Oldsmobile Jetfire. By the 1970s, Saab,

What is a supercharger?

How does a twin-turbo work?

What is a turbocharger wastegate?