Lost in the 63's shadow, or a highlight in the new AMG range? 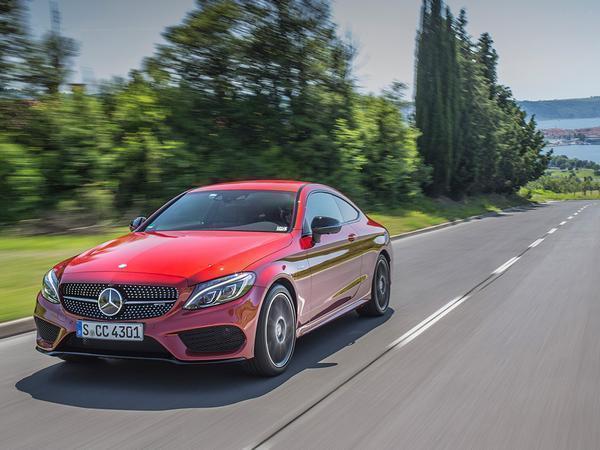 In the presence of

, there was a danger the new

could be overlooked. Especially on PistonHeads, this bastion of V8 lunacy and oversteer appreciation. However, as this 3.0-litre twin-turbo V6 will be seen in everything from

, the latest performance C-Class is worthy of close attention. Particularly as there's now a 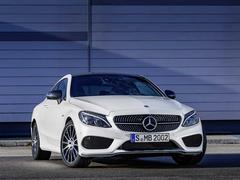 Sadly for the C43, any concerns from the spec sheet aren't immediately allayed in the metal. Parked up next to the brooding and intimidating V8, it looks a little meek and far closer to the ordinary C-Class models than the AMG. Of course Mercedes will want some distance between the V6 and V8, but it seems a shame that the '43 cosmetic upgrades - wheels, grille, bumpers - could not convey a little more sporting intent.

The interior does a far better job, the super stylish C-Class cabin enhanced with aluminium trim, some jazzy stitching and a pair of really good seats. Certainly it makes a 4 Series look rather sombre, though the Audi comparison would still appear to be the most relevant one. 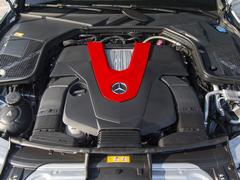 The C43 drive is split unevenly between

and cabriolet: barely 10 miles in the sunshine with the coupe, followed the next day by a roof-up drive in a storm with the cabriolet. Perhaps not the most comprehensive or best suited test, then, but one probably very representative for UK customers.

The coupe drive comes soon after the C63 thras- ... evaluation ... and immediately there are areas where V6 improves over V8. It feels much lighter for a start (because it is), more nimble and lithe in similar conditions. The reduced mass benefits the ride too, the C43 flowing in places where the 63 might have thumped. Even the steering feels improved; not only are there elastokinematic tweaks on the front "adopted" from the C63, but it also has just two modes for the speed sensitive power steering rather than three. Fewer modes tend to be better when it comes to things like steering. Combined with the reduced mass, the '43 steers more precisely than the '63, with less artificial weight in the racier mode too. It's not an Elise, granted, but the improvement is there. 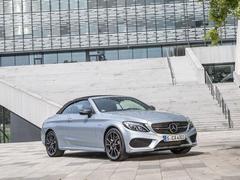 But the V8 has to be preferable to the V6 on the road, right? Well, yes, actually it does. However good the V6 is - and it is very, very good - it would always struggle to match the thunderous charm and brutal power of the 'hot-V' V8. To its credit the 367hp 3.0-litre V6 is one of the better downsized units, revving enthusiastically to nearly 7,000rpm and disguising its force-fed nature extremely well. But if the praise for the engine is near unequivocal, the nine-speed auto it's paired to is something of a mixed bag; the AMG tweaks to the software are successful in the most part - particularly in the responsive manual mode - but it has been made too eager in the Sport and Sport Plus auto modes. With 383lb ft you don't need kickdown at every touch of the pedal!

In the limited time with the coupe on the road, it felt mature, safe and capable of carrying plenty of speed. If that makes it sound a little dull that's because, after the C63, it did feel just a little plain. That's not in some wild, tyre-smoking hooligan way either; the V8 car always rear-driven in an exciting yet accommodating way where the '43, not unlike the original A45 in fact, feels rather locked down at road speeds and uninterested in doing much beyond gripping. Mercedes says the all-wheel drive helps differentiate the two models, but then it could be argued that a litre of swept capacity, two cylinders and more than 100hp does that as well. Let's see how it fares - journalist get out of jail free card here - how it feels in the UK and, more importantly, against that S5. 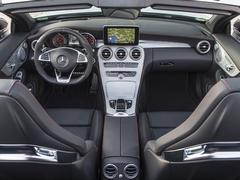 To the cabriolet, and the kind of rain that makes you question Merc's logic in keeping a fabric roof. Still in truly torrential European rain, or what we might call a spring shower, the C43 feels extremely well insulated. Indeed, it may even be slightly more refined roof up than the V8, with slightly less wind noise where the windscreen and roof meet.

Much of what appeals about the coupe remains intact for the drop-top, particularly the powertrain. The slick surface doesn't turn the C43 into some kind of Evo-style 4WD weapon, but you'll hopefully understand something less than maximum commitment in weather this bad. In fact, the easily accessible performance and tremendous grip suit the more relaxed cabrio well. The V6 still sounds fantastic with the roof up too, snarling and barking its way through the rev range; shame about the contrived overrun crackle though. 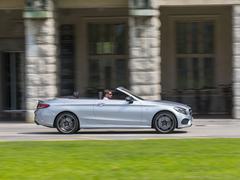 So where does that leave the '43 in the AMG performance hierarchy? Don't forget there's a saloon and an estate coming too, the latter previewed in the

last year. If you're after a fast Mercedes, chances are it already exists or is on the way! AMG's success with the C-Class has been in creating two very different products, each with their own unique appeal. On this experience of the C43, it unsurprisingly offers similar merits to those found in the C450, namely a strong powertrain and real dynamic quality in areas such as the damping. It's not as overt as the V8 car but that's exactly the point, and if you want a stylish and rapid compact exec than it comes highly recommended. For us, however, the pull of the '63's fantastic engine and more engaging handling is too strong to ignore - if there's any possibility of obtaining the V8 instead of the V6, you won't regret it.