Volvo Group unveils its vision of the future, and first car - the Polestar 1

. These days of course we're more familiar with it offering upgrades for cars like the V40, but with over 40 per cent of global car sales expected to be electric within the next two decades, and upstarts like Tesla getting a jump on more

, Polestar has been retasked with guiding Volvo

in a new direction 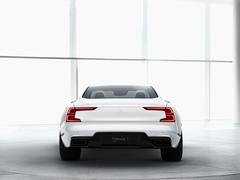 Today it is being officially launched as a new, standalone, electric performance brand. The company will remain a subsidiary of Volvo, fully consolidated into its operation, but now acting as a "technology spearhead", creating its own models whilst continuing to reap the benefits of sitting under the Volvo Group umbrella. This, according to Polestar, should allow it to accelerate the design, development and manufacture of a new range of electrified performance cars.

What you see here is the first in this new range of electrified Polestars, creatively named the Polestar 1. A two-door, four seat GT, powered by a hybrid drivetrain based around Volvo's four-cylinder Drive-E engine. With a combined output of 600hp and 728lb ft, it is capable of hitting 62mph in just 3.8 seconds. That's what we'd call a good first impression.

In its 'Pure' mode - running in rear-wheel drive and powered solely by the 218hp from a pair of torque vectoring electric motors - the 1 boasts a range of just over 90 miles, triple what a Panamera 4 E-Hybrid can achieve and the longest electric range of any hybrid car. For an extended journey of up to 620 miles, or to experience a broader spectrum of the talents on offer, 'Power' mode adds in the petrol engine, driving the front wheels too and morphing the Polestar 1 into an all-wheel drive super GT. 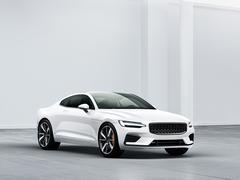 Looks good though, doesn't it?

This should not be mistaken as simply a powerful mile muncher however. It may be based on Volvo's Scalable Platform Architecture - and look like an S90 coupe, even if that's no bad thing - but approximately 50 per cent of the car is new and bespoke, created by Polestar's own engineers. As Thomas Ingenlath, Chief Executive Officer of Polestar, puts it, "Most electric cars are fast - that's a product of the attributes of an electric motor. However, for Polestar, performance is... also about cornering, braking, suspension control, chassis feedback and steering feel."

To that end the 1 is also the first car to ever be equipped with Ohlins' new Continuously Controlled Electronic Suspension. Each damper is fitted with an electronic valve to constantly monitor both the driver's inputs and the road surface and appropriately adapt the car's dynamics in two milliseconds. Akebono six-piston brake calipers and 400mm discs should provide plentiful stopping power, and the major body parts of the Polestar 1 are made from carbon fibre. This has led to a weight reduction of 230kg compared to an S90 saloon, also moving the weight distribution to 48:52 front to rear. There's a 45 per cent increase in torsional stiffness too, and a lower centre of gravity. Although there are 230kg of batteries and motors making up the difference...

It should be quite something to drive then, but we'll have to wait a little while to do so; production isn't set to begin till mid-2019 and a maximum of 500 cars per year will be built at the new Polestar Production Centre in China. Currently under construction itself, the factory should be finished midway through 2018 and will also host a customer test track and one of the first 'Polestar Spaces', a network of stand-alone dealerships. Polestar is keen to point out that its facilities will not be located within existing Volvo showrooms. 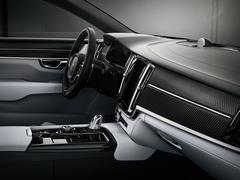 This is because Polestar is aiming to deliver a unique car-buying experience. One-upping Porsche's

seem already, Polestar says it is looking to remove what it calls "the inconvenience of ownership". To do so, it will offer a fixed term, zero-deposit, one-to-three year all-inclusive subscription. This will cover insurance, maintenance and depreciation, with extended concierge services - including the use of a larger Volvo car domestically and internationally - also available. The subscription can be 'topped up' as well, with a range of additional on-demand extras. Everything from scheduled maintenance, to the booking of a car wash, to the temporary installation of a roof-box, can be arranged through and carried out by Polestar with an incremental charge then added to your monthly invoice.

As with the Passport scheme, all features from initial test drives to the on-demand services, can be ordered online on through the Polestar app, with no need to ever set foot in a 'Space'. From the day you take delivery of your car, the app can also be used in lieu of a key, or to remotely pass a 'key' to a concierge or driver for collection, re-charging or servicing.

Then, at the end of the contract, you can use it to arrange collection by Polestar, which will then refurbish and prepare it for a secondary subscription as a pre-owned vehicle - presumably going some way remove the concern of battery degradation from the purchase of a used hybrid. 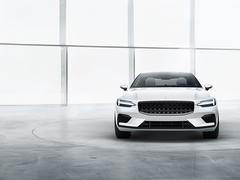 Something totally new? We'll find out in 2019

The Polestar 1 may be the fledgling company's first hybrid, but it will also be its last, with all future Polestars being electric only. The Polestar 2, a mid-sized Tesla Model 3 competitor, will start production later in 2019 and will be followed by Polestar 3 - really, guys? -  which is still in the final stages of design. This will take the form of an SUV-style Tesla Model X rival though, and will sit between Polestar 1 and Polestar 2 in terms of volume and pricing.

An awful lot to digest then, and hopefully to look forward to. Should your interest have been piqued though, the order books for the new Polestar 1 open on October 17th, with the RRP set at 130,000 euros and expectations set equally as loftily. Oh yes, and one last thing: it will be left-hand drive only...