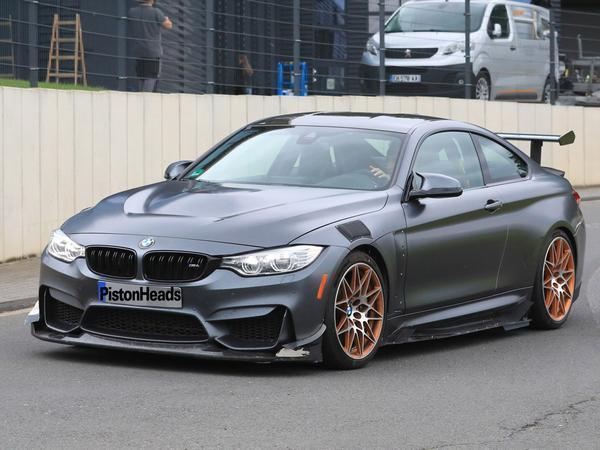 Say what you will about the BMW M4 GTS, it could never be accused of lacking focus. It's a seriously potent, track ready M4 and, while not quite a GT3 beater, the GTS is without doubt a properly thrilling M car.

With this generation of 3 Series nearing its end, plus the M3 off sale because of WLTP regulations, it's a surprise to see another F82 M4 in development. But that's what we have here, a GTS seen near the Nurburgring looking even more you-wanna-take-this-outside punchy than usual.

Note for example the huge intakes and canards at the front end, the GT3 RS-aping arch vents and the gaping cutouts ahead of the doors. Even before the driver's seat there are some pretty serious changes! Along the side the sill extensions are even more prominent, while at the rear things have got really silly: the rather apologetic rear wing of the standard GTS has been replaced by an absolute whopper of a fixed spoiler, accompanied by the sort of diffuser that looks like it might grate any ankles that come too close.

Clearly, then, this car is something even more serious than a regular GTS, though nobody seems quite sure what it might be. The M3/M4 range has never gone beyond a GTS before, so this is new ground for the model. Could it be a GTS-R? The modifications here would certainly imply this is not just a mild update of the existing car.

Given the location, and looking at the overhaul, could BMW be aiming at some sort of crazy Nordschleife lap time? Hardly original, granted, but the goalposts have moved since the standard GTS clocked a 7:28 at the end of 2015. With a bit more power from the water injected, turbocharged straight-six, plus the circuit advantage of the extra aero, could the 911 GT3's 7:12 be within reach? Nobody outside of BMW can be sure for now. But count us amongst those who can't wait to find out.