A late-life tickle to the range-topping XJ doesn't stop it feeling its age. Which isn't necessarily a bad thing...

Apparently Jaguar now regularly fields calls from celebrities who would like to be taken to events in the back of an XJ saloon. It's owing to the fact that - unlike, say, with an Audi A8 or a

- you don't see people being ferried to airports in Jaguar XJs all that often. Exclusivity, see. I suppose 'exclusive' and 'unpopular' are two sides of the same coin. 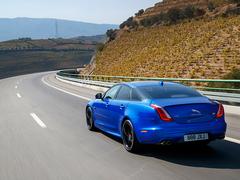 The Jaguar XJ is a something of a rare car, then, in the luxury car realm. Which is at once a positive thing, and then yet probably it's still a bit rarer than Jaguar would like. Rare enough that Jaguar had considered whether it was worth replacing it. Design director Ian Callum says, though, that "a flagship car company needs a flagship car," so a new one is on the way.

Meantime, the current XJ has been given a late-life tickle. This is a seven-year old car and probably has three or so years left. So, now, electrically-assisted power steering arrives in place of the hydraulic setup, and with that comes a fair raft of active safety systems. Some, like semi-automatic parking and lane keep assist, can't work without electric steering. Others, such as adaptive cruise control that works to and from a standstill, or cross-traffic warning systems, just needed better sensors all round. So the XJ gets them. When you compare it to cars like the latest Audi A8, though, or the Mercedes S-Class, the XJ is still some way short of being an industry-leading tech-fest, but I guess it broadens the appeal to those who want a car to do more and more for them.

And then there's the XJR 575, for those who still like to do things themselves. It's the flagship variant of the flagship range, but when it comes to giving you a guiding hand, it's does less via electronics and more via the medium of a supercharged, 5.0-litre V8 engine, turned up from the 550hp it used to have, to the 575hp that lends it its name now. 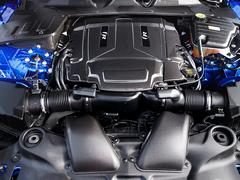 The number's replicated on a dashboard plaque that would look a bit out of place in a £30,000 hot hatchback, let alone a £90,000 luxury sedan, but here we are. The rest of the interior's pretty attractive, very roomy in the back in long-wheelbase form (obvs), but the infotainment, if you're used to what Audi or BMW will give you, is like picking up a several generations-old mobile phone.

Still, the important bits are the mechanical bits, here. Drive is to the back wheels only, via a ZF eight-speed auto, and the engine's extra poke all comes via a retuned ECU. Torque is 517lb ft from only 3,500rpm, while that power peak is at 6,500 - and because it has supercharged, not turbocharged, assistance, the output is linearly responsive. Sounds good, too; think pleasingly authentic V8 soundtrack occasionally overlaid with supercharged whine.

And while there's quite a lot that Jaguar doesn't get as right as some of the big premium carmakers, there are a few things that it always seems to have nailed; mostly because it has one of the best dynamics teams around. They've kept things lovely here, too: there's steering that's oily smooth, ideally geared and weighted, and gives nothing up for being electrically assisted. The ride is both deftly controlled yet adequately absorbent for a car of this type. And then there's handling that's lightly engaging when you want, relaxing when you don't, and ridiculously thuggish if the mood takes you. 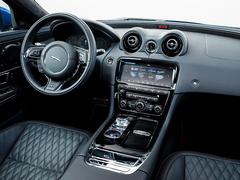 So I wonder if the compromise is, in some ways, how a luxury car ought to feel. It feels a bit more 'old money' than a slick rival which wants to get everything right but feels leaden, wooden and uninvolving with it.

Jaguar won't necessarily thank me for this, because it thinks the modern Jaguar has appropriately modern design (wouldn't disagree, Ian). But nevertheless the XJR has the vibe of a comfy old settee. It doesn't exist for a world of doing things for you. It's a world where you're involved. It says old stone cottages with dusty fireplaces and a spaniel on a rug. It says tweed and ale and brogues and shotguns and slow-roasted lamb and cabinet ministers. And honest old-fashioned chassis dynamics. There's something quite nice about that.