Rally-spec GT4 to run as course car at Rallye Deutschland 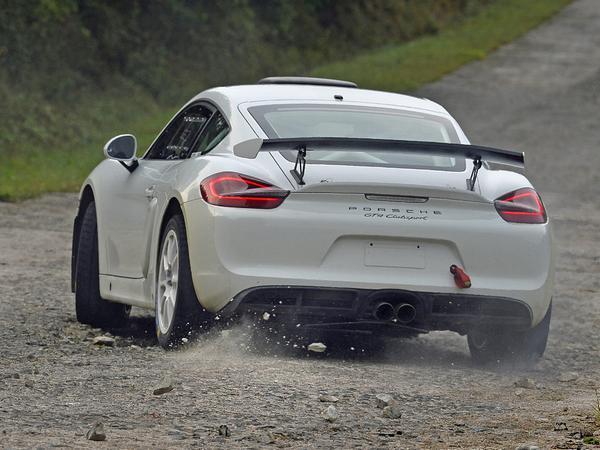 UPDATE - 10-08-18
So Porsche has finally gotten around to officially revealing its R-GT category Cayman. As we suggested last week, the car is a lightly reworked GT4 Clubsport, which will run as a course car at the ADAC Rallye Deutschland next weekend with Romain Dumas installed at the business end. The manufacturer calls the new model a 'concept study', and leaves open the question of whether or not it will be offered to customers at a later stage.

Predictably, Porsche hasn't divulged a huge amount of technical data on how the car differs from its circuit racing sibling, but it has confirmed that its rear wheels are driven by the same 385hp 3.8-litre flat-six engine and PDK transmission. As you might expect, the R-GT Cayman features full underbody protection, as well as energy-absorbing foam in the doors to help with punishment it's likely to face on your average rally stage.

"We're looking forward to seeing how the rally world responds to our FIA R-GT concept study," says Dr. Frank-Steffen Walliser, Vice President Motorsport and GT Cars. "I would like to invite every interested driver and team principal to visit the service park and take a close look at our rally concept car. Based on the feedback and the interest from potential customers, we will then decide by the end of the year whether we'll develop in the mid-term a competition car for near-standard rallying based on a future Porsche model."

But it gets better, because this video doesn’t just feature a bored two-times Le Mans winner mucking about on a forest lane. No, this is Dumas lending his extensive rally knowledge to test an all-new challenger for the FIA’s R-GT class of world rallying. The category features rally versions of GT racing cars, ranging from Porsche 911s to Abarth 124s.

Dumas’s car, a Porsche Cayman R-GT, looks to be based on the outgoing GT4 Clubsport so ought to use a 3.8-litre naturally aspirated flat six (rejoice), sourced from the pre-turbocharged 991 911 Carrera to produce something in the region of 385hp - although that output could change in the rally car.

While no technical specifications have been released, Dumas’s rally engineering company (he doesn’t just like asphalt, you know) RD Limited has handled the competition makeover, so expect a rally-spec suspension setup that can survive jumps and bumps, a more aggressive limited-slip differential and stone-proof brakes to be included.

Dumas, who last won Le Mans in 2016 in the Porsche 919 Hybrid, recently tweeted that the Cayman R-GT will compete in the German round of the World Rally Championship, which takes place on the 16-19th of August. Although he hasn’t confirmed it, it’s thought that if the car performs well there, it’ll be Dumas’s challenger for stints in the 2019 R-GT Cup, a world championship dedicated to rear-driven machines.

You might be wondering why Dumas doesn’t just use an R-GT-spec 911, since rally 911s are commonplace and Dumas has even won previous R-GT rallies in a converted GT3 RS 4.0. It’s possible that the more compact dimensions of the Cayman and its mid-ship engine layout could make it the more effective tool to thread around narrow rally stages. But we’d also hedge that 40-year-old Frenchman Dumas quite fancied developing a rally car from the ground up. Because, well, who wouldn’t?