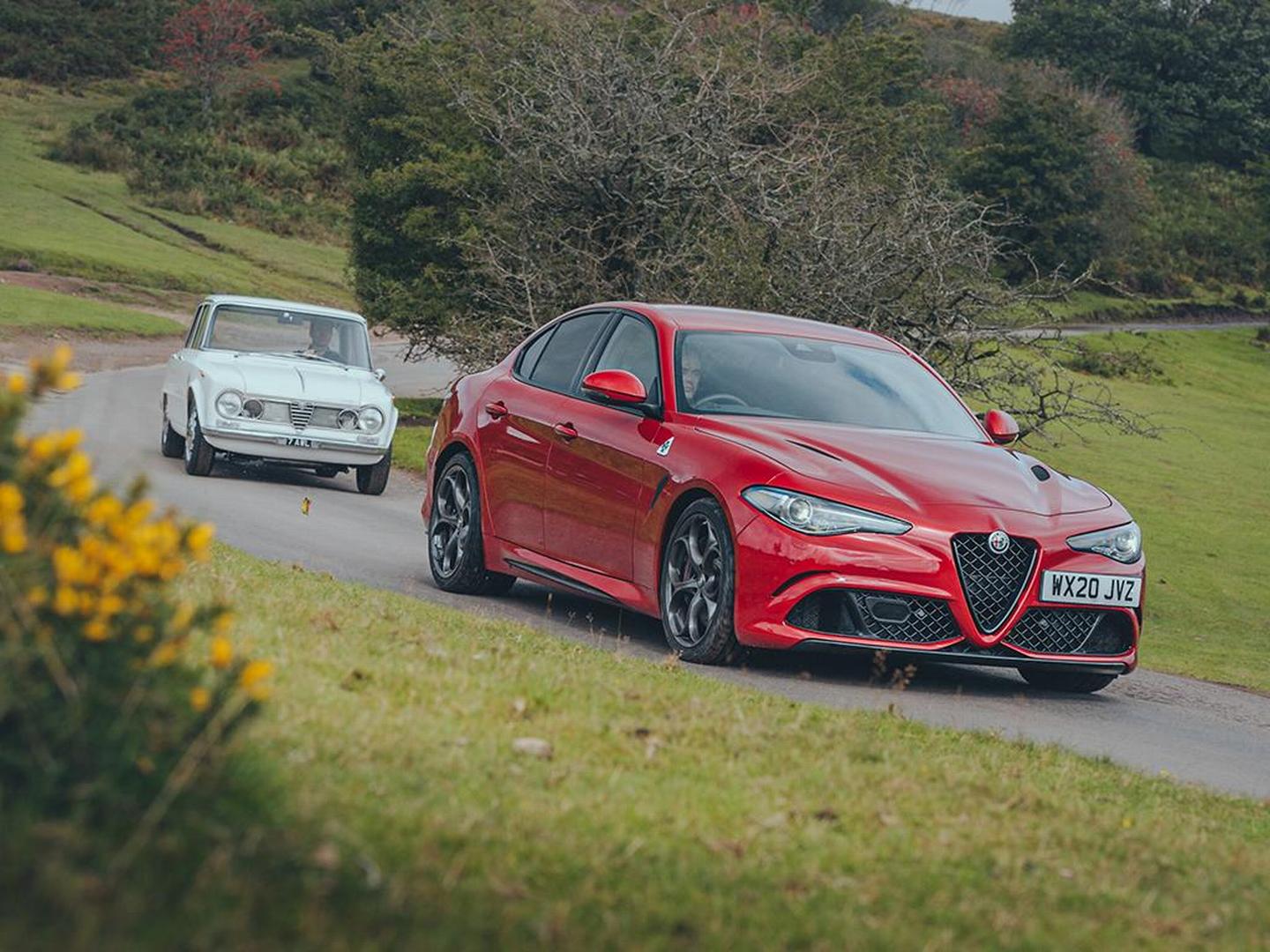 With the finest modern cars, drama is only present when you want it to be. With their predecessors, it's there all the time. It's a point made perfectly by the journey to Somerset's Quantock Hills in the new Alfa Romeo Giulia Quadrifoglio - effortless on the motorway, snarly and exciting once the roads get quieter and its towering power output gets let off the leash. And then a cosy place to sit as we wait in the rain for our older star to show up, having travelled from specialist dealer Alfaholics near Weston Super Mare.

You hear the approach of an Alfa Romeo Giulia TI Super long before you see it. A snarly exhaust note precedes it, one that is serious and angry, rorty and purposeful. It's a soundtrack that speaks of clear motorsport origins, which is why the sight of the tall, boxy Giulia delivering it is likely to be a surprise. From a distance the TI Super looks like pretty much any other example of the long-lived and hugely popular 'Type 105' Giulia saloon. Only the sight of the famous green-on-white Quadrifoglio four-leaf clover badge on the front wing gives an early clue as to how deceptive appearances can be.

Alfa first used the Quadrifoglio badge nearly a century ago. It had been the personal standard of Ugo Sivocci, who drove an Alfa Romeo RL to a hard-fought victory in the 1923 Targa Florio. He died in a testing crash a few months later, and Alfa Romeo adopted his symbol in permanent tribute; it has been worn by every Alfa works race car since then. But the Giulia TI Super marked the first time the company regarded any of its road cars as being special enough to earn it. Only a select number have since then, with the new Alfa Romeo Giulia Quadrifoglio proudly wearing the same Cloverleaf to show its range-topping status.

Things have obviously changed considerably in the 57 years that separates these two cars. The Giulia Quadrifoglio is packed with technology that would have been indistinguishable from witchcraft in the early 1960s, from the convenience of satellite navigation and power-operated seats to dynamic powertrain features including the ultra-fast eight-speed automatic transmission, adaptive dampers and even a torque biasing rear differential that uses electronically controlled clutch packs to vary effort across the rear axle.

The term "homologation special" had only just been coined in 1963, with the Giulia TI Super a pioneering example of the new breed. The European Touring Car Challenge had just been founded and Alfa was keen to prove the Giulia's dynamic mettle by taking part. The sportiest road-going Giulia TI was already packed with what was then cutting-edge technology for a family car, including a twin cam engine, five-speed gearbox and a coil sprung rear axle. Its upright styling was remarkably aerodynamically efficient, too - with a 0.34 Coefficient of Drag. But Alfa Romeo needed something a little more special as the basis for its racing model.

So while the Giulia TI Super looked very similar to the regular TI, changes below the surface were substantial. It got an all-alloy 1.6-litre engine with a 9.7:1 compression ratio, more aggressive camshaft profiles and dual twin-choke Weber carburetors. This made what was then a very healthy 112hp at 6500rpm in road-going trim, but still had the capacity for the factory's Autodelta competition department to extract considerably more in racing tune. Apart from the very earliest examples, the TI Super also got four-wheel disc brakes, a world first for any car in this class.

Both cars are among the fastest saloons in the world for their era, but the Giulia Quadrifoglio is in a different league when it comes to performance. It has a charismatic 2.9-litre bi-turbo V6 that produces a dizzying 510hp, and which reaches the rear wheels through a quick-shifting eight speed gearbox. A blistering 3.9-second 0-62mph is less than half the time the older car would take to dispatch the benchmark - around 9 seconds, depending on which road tester you asked. The idea of a four-door car with a 192mph top speed would have seemed impossible in the 'sixties; the TI Super's 115mph was considered equally outlandish when it was new.

Without the need for the mass and complication of safety systems - it didn't even get seatbelts - there's no surprise that the Giulia TI Super weighs far less. But even compared to the already svelte 1000kg Giulia TI of the era it was been given a substantial diet. The TI Super replaced the regular TI's grille with a lighter mesh one that lost the inner headlights, and even thinner-gauge metalwork and plexiglass rear windows. In total it was 90kg lighter. But Alfa Romeo didn't want to punish buyers by just removing things; it needed to sell enough of the TI Super to homologate the racing version. So the road car got stylish bucket seats in place of the regular Giulia's bench, a floor-mounted gearshift to replace the usual steering column change, plus instrument dials instead of the standard 'Type 105' Giulia's linear strip speedo - even the racey addition of a rev counter.

Parked together the Giulia TI Super looks predictably dainty next to the Giulia Quadrifoglio - it is more than half a metre shorter - yet the older car was considered a full-sized family saloon when it was new, with room for five and a spacious boot. The combination of practicality and performance is one the modern car has upheld, the Quadrifoglio's cabin seeming impossibly luxurious compared to its Spartan predecessor.

The new Giulia's Multitouch interface and central 8.8-inch touchscreen is quick and intuitive thanks to touch-and-swipe control and a suite of apps, including Performance Pages that are capable of recording peak acceleration figures. The cabin's extensive use of carbonfibre provides a connection to modern motorsport, although not that from the era of the TI Super which predates their introduction.

Alfa Romeo only built 501 Giulia TI Supers, many of which went racing and only a minority of which now survive. Their rarity and motorsport provenance has made them both collectable and expensive; a straight, original example will cost considerably more than a new Giulia Quadrifoglio. Much has changed in the 57 years, yet the pair are linked by more than just parentage and badging. Both cars stand as perfect examples of Alfa's dedication to excellence, and the company's determination to take its best and make them better.

This is a promotional feature written by PistonHeads for Alfa Romeo UK. Thanks to Alfaholics for arranging use of the Giulia TI Super