Lots of cool new stuff, but the bits we love are all still there | Promoted

When the Alfa Romeo Giulia Quadrifoglio was launched in 2016 it immediately became one of our favourite sports saloons thanks to its combination of huge performance and serious style. Now it's been given a comprehensive update to sharpen its case further - here are our highlights.

The Giulia's magnificent 2.9-litre bi-turbo V6 will always be its star feature thanks to both its output and charisma. The all-aluminium engine combines an operatic top end, with the peak 510hp arriving at 6500rpm, with doughty low-down torque, the maximum 443lb-ft all present by just 2500rpm. It's enough to blast the car from 0-62mph in just 3.9 seconds and onto a top speed of 190mph. While mechanically unchanged the engine is going to sound even better thanks to the next highlight on our list.

A tempting new option for the Giulia Quadrifoglio comes from the Mopar accessories range: an Akrapovic exhaust upgrade. The option brings both a harmonically optimised rear silencer and branded carbon fibre tailpipe finishers. Akrapovic was founded by Slovenian motorbike racer Igor Akrapovic in 1991 and has become renowned for its light performance systems, creating exhausts for top-flight motorsport on both two and four wheels.

The new Giulia Quadrifoglio's cabin has been upgraded with a new steering wheel and leather clad gearshifter. A new centre console brings additional stowage space as well as the welcome arrival of an integrated wireless charging pad to cut down on cable clutter. The combination of Italian craftsmanship with extensive use of carbon fibre, aluminium and high-grade leather make the Quadrifoglio a properly special place to spend time.

A new Multitouch interface is quicker and more intuitive to use, featuring an 8.8-inch high resolution touchscreen. Multitouch incorporates both Alfa Romeo's own suite of apps, with instinctive touch-and-swipe touchscreen control, and can also be operated by the more familiar rotary controller between the seats. Multitouch also offers full support for both Apple Carplay and Android Auto.

A cool new feature is the Performance Pages app, effectively an on-board telemetry system for the Quadrifoglio. This can display realtime information on engine or drivetrain beyond the conventional instrumentation as well as a graphical 'colour map' to show the heat of different components under hard use. There's also a drag race timer to record acceleration numbers (in a safe environment, of course).

The Giulia Quadrifoglio's mass is perfectly split between front and rear axles when the car is still - the much vaunted 50:50 weight distribution - giving it both keen responses and an optimal natural balance between grip levels from each end.

While it remains a pure-blooded driver's car when you want it to be, the Giulia Quadrifoglio has now been upgraded to offer the option of Level 2 autonomy to ease the strain of longer journeys. The car is able to regulate its speed around other road users in almost all conditions. Other active safety features include lane keeping, blind spot monitoring, forward collision warning with AEB, park assist and auto high beam.

The Giulia Quadrifoglio remains the only sports saloon on sale with active front aerodynamics, a carbon fibre splitter mounted just below the bumper opening at speeds above 60mph to increase downforce and therefore also stability.

The standard eight-speed transmission remains one of the fastest shifting automatic gearboxes in the world, capable of swapping ratios in just 150 milliseconds with the Quadrifoglio in Race mode. Alfa Romeo's Active Torque Vectoring system uses two electronically controlled clutch packs to shift effort across the rear axle, optimising both traction and stability.

The Quadrifoglio - four-leaf clover - has been part of Alfa Romeo's history since 1923 when racer Ugo Sivocci drove a car wearing it to victory in the famous Targa Florio (Alberto Ascari drove another Alfa to second place.) Sivocci died later that year while testing at Monza, and in tribute to him every Alfa works race car since has worn the Quadrifoglio badge, as have the company's most special road cars. 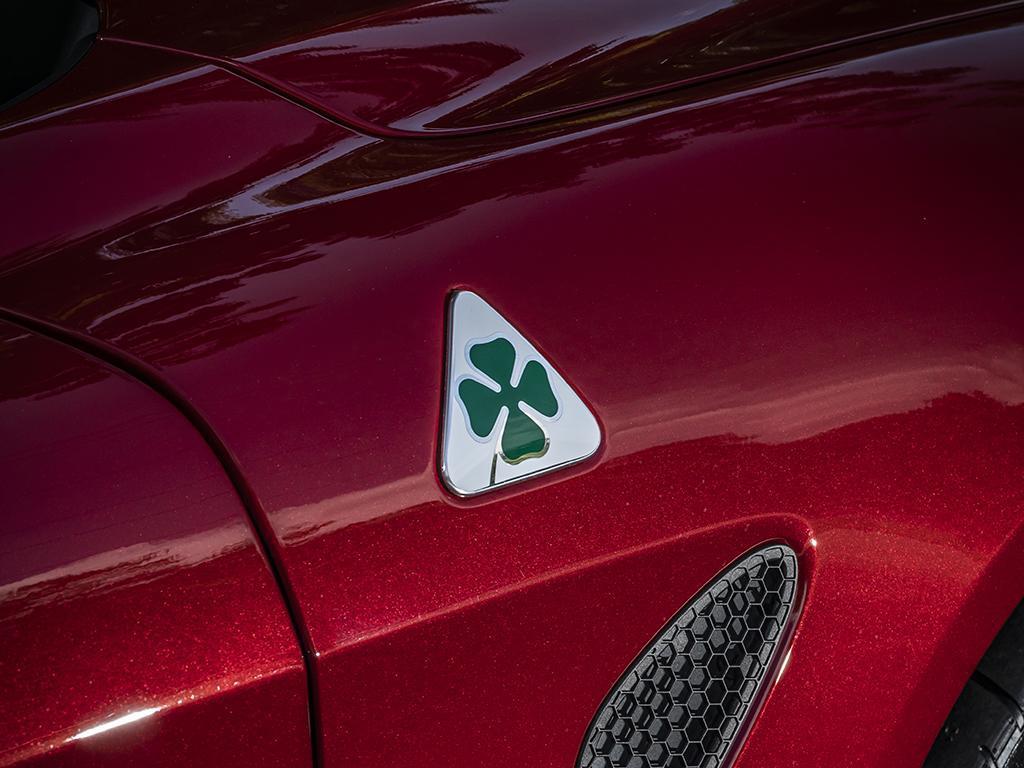 This is a promotional feature written by PistonHeads for Alfa Romeo UK.