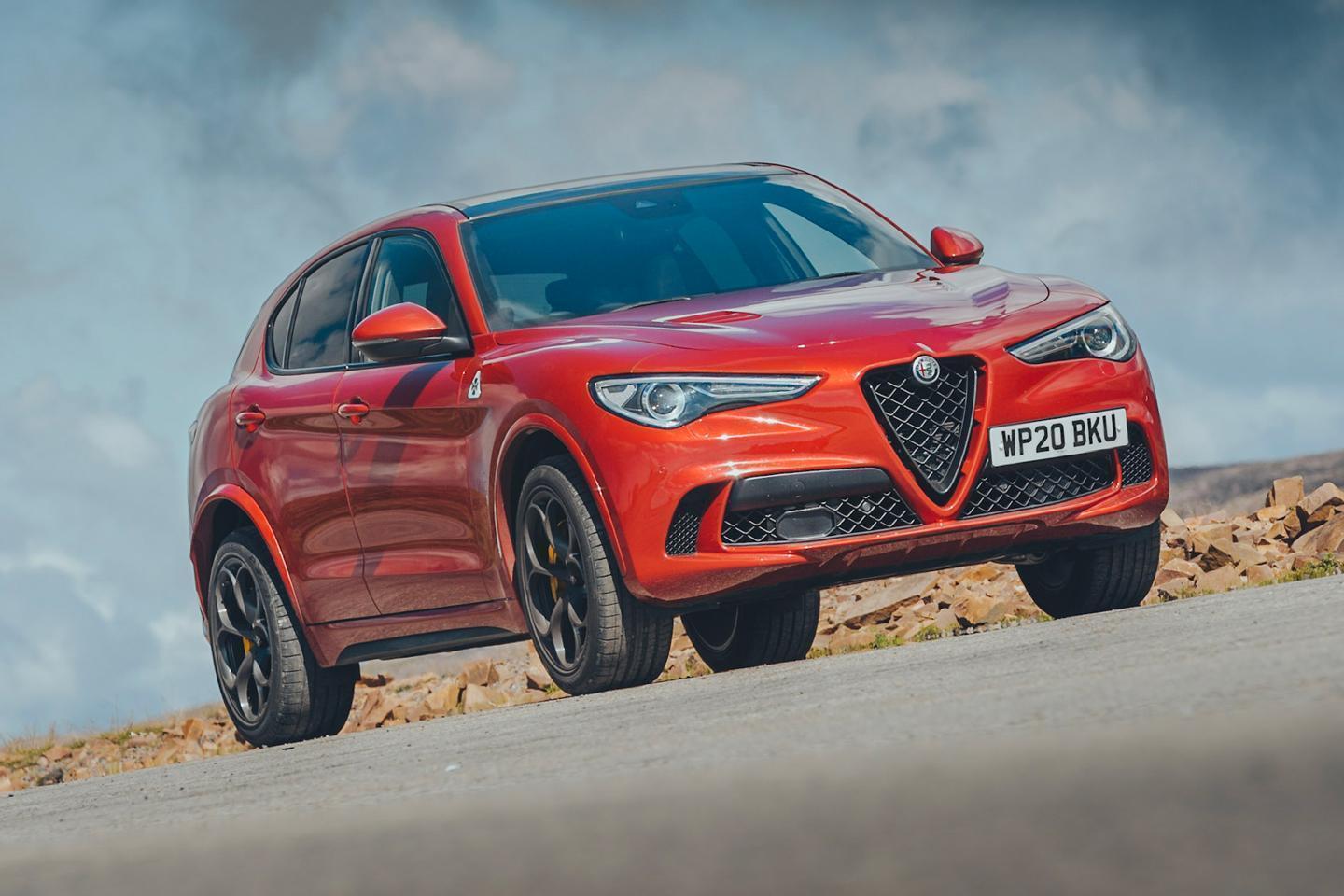 Our first choice of destination to celebrate the Alfa Romeo Stelvio Quadrifoglio’s adventurous side was an entirely obvious one – the Stelvio Pass itself. Italy’s highest paved road is a magnet to those who want to drive (or pedal) up its 86 hairpins, and would doubtless have been a perfect backdrop to a story about the brawniest version of the car that was named after it.

But then 2020 got in the way and travel restrictions forced both a change of plan and some more lateral thinking. The UK can’t manage any Italian-scale roads to rival the Stelvio’s 9045 foot summit, but the Scottish Highlands do an equally fine line in mountainous scenery. And, on the Applecross Peninsula, there is even a miniaturized British version of an Alpine pass, complete with hairpins, scary drops and spectacular views.

The Bealach na Ba or ‘Pass of the Cattle’ isn’t on the way to anywhere beyond the small fishing village of Applecross. But in recent years it has become a major tourist destination in its own right. It features the UK’s steepest ascent, climbing from sea level to a 2045 foot summit in just five and a half miles, and offers a stunning vista from the top. In recent years it has become part of the hugely popular part of the 512 mile long “North Coast 500” loop of the northern Highland mainland which has become a must-do for many looking for automotive adventure. In the summer it gets seriously busy as drivers and cyclists negotiate its single track and tight-fitting passing places.

It’s a great place to experience any car, and an opportunity to make acquaintance with the new Stelvio Quadrifoglio. While the star feature 2.9-litre twin-turbocharged V6 is unchanged the car has been given various upgrades in its latest incarnation, including a revised interior with high-resolution touchscreen and several configurable performance apps and the option of a new Akrapovic sports exhaust. One option that definitely won’t be getting tested is the part-autonomous piloted driving function: one that relies on road width and markings that the Bealach na Ba doesn’t possess.

Missing the traffic means turning up early. Something that brings another benefit – the cool early air discourages the savage attentions of Culicoides impunctatus, better known as the Highland Midge, the tiny biting insect that can make life very uncomfortable up here. We rise with the dawn and opt to miss breakfast in our hotel 20 miles away so we can have the road to ourselves, for a couple of hours at least.

The first challenge with the Bealach na Ba is actually finding it. It isn’t marked as such, and isn’t considered important enough to even get a road number. The junction from the main A896 at Tornacross is marked by just a small sign for Applecross, and a more strident one that warns “Road Normally Impassable In Wintry Conditions.”

This definitely isn’t a playground for power. Unlike many Alpine passes, the Bealach na Ba is narrow all the way, much of it is bumpy and for most of its length sheep are roaming freely. Only a small percentage of the Quadrifoglio’s towering 510hp output is going to be required to deal with any of that, although the mighty V6’s easily accessed 443lb-ft torque peak is perfectly suited to the long, sapping gradients. The bigger driving test is going to be of suspension compliance over the many undulations, and the stopping power of the brakes.

Drovers were moving cattle across the high ground of the Applecross Peninsula for centuries before the road arrived. It was built in the 1820s on the same route to create a permanent connection that could be used throughout all but the most wintry weather. This was almost exactly the same time that the then Austrian empire was constructing the Stelvio Pass and, like the taller Alpine route, the builders of the Bealach na Ba tried to find the easiest route up. After an initial climb from Tornacross the road stays well below the towering crags, hugging the rock-strewn mountainside as it searches for the most favourable gradients. The savage topography reflects sound nicely and before long the hills are alive with the sound of the Quadrifoglio’s sports exhaust and the urge to start humming Matt Munro’s “On Days Like These” is almost irresistible.

But after rising at a cautious rate for a couple of miles the road is forced to climb harder to reach the summit. It does this through a series of three hairpin bends, all of which feature acute angles – only one vehicle can negotiate them at a time – and two also have unhelpful cambers. During the day we see several vehicles having to take more than one go at getting round them, but none faze the Quadrifoglio’s smart Q4 all-wheel drive system. Setting the display screen app to ‘Torque Management’ also gives a neat visual demonstration of how much effort the centre coupling and torque-biasing rear differential are sending to each wheel.

There is never any guarantee on Highland weather, but luck has brought us a beautiful day for our visit. The air is clear and the outlook from the summit is breath-taking with uninterrupted view to the islands of Raasay and Skye. Turning to look the way we’ve just come produces a view that could be straight from Lord of the Rings. It’s stunning in every direction.

But we’ve got pictures to take before the road gets busy. The Stelvio is soon heading back to where a well-chosen vantage point gives sight of all three hairpins. For half an hour, the road is pretty much ours and the Stelvio is in its element, powering up and down for the photographer. From inside the Quadrifoglio’s cabin it also gives the chance to notice that the barrier that guards the middle hairpin – and which has the biggest drop beyond it – is conspicuously rusty compared to the obviously newer ones around it. Reassurance that nobody has crashed through it for some time, but also raising the question of how well the heavily corroded metal would cope if somebody did run out of brakes. Not an issue today, with the Quadrifoglio’s vast discs delivering tireless retardation. Steering is another highlight, reactive and yet uncorrupted by the road’s many bumps and bangs. There can’t be another SUV this easy to place confidently on a road this rough and narrow.

Nothing this good lasts for long, and before 10 in the morning the road is starting to get busy. First come several waves of cyclists, most from the Applecross direction, now enjoying the long descent after what must have been a thigh-busting early morning climb. Then soon afterwards, and visible long before they arrive, the first of the lumbering motorhomes that are heading slowly up the gradient in the other direction. Before long traffic has risen to a level that the limited number of passing places are struggling to deal with. The midges have also woken up, drawn to the parking areas to feast on tourist flesh.

It’s a good time to head off, down the hill to Applecross with the Stelvio’s suspension demonstrating impressive compliance over the rough and rugged tarmac and the brakes given another work out by what is the steepest descent in the UK. We arrive unflustered in good time for a leisurely lunch overlooking the Inner Sound. The Bealach na Ba might gain less than a quarter of the altitude that the Stelvio Pass does, but it still feels like a proper adventure. The journey home, on a route including many of Scotland’s finest roads, will be equally memorable.