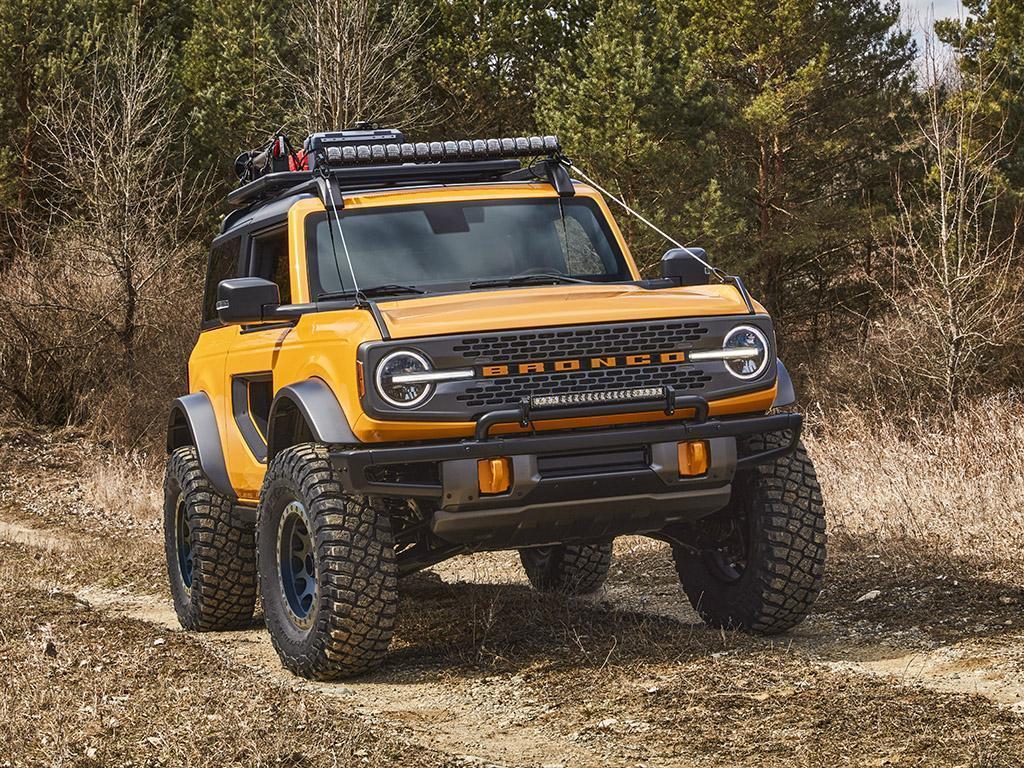 Well here we are then, at last. After years of rumours, conjecture, spy shots and speculation - plus the more recent debacle around revealing it on OJ Simpson's birthday - this is the new Ford Bronco. And not just one Bronco, either, but two: the regular model, a "midsize 4x4 SUV" in America, with two or four doors, four seats or five, removable panels and four- or six-cylinder engines, plus the smaller Bronco Sport. The latter is a "subcompact 4x4 SUV" and will be exclusively available as a four-door, five passenger variant, with the former not even a little bit removable. Perhaps even more surprising is the Sport's choice of engines: a three-cylinder Ecoboost is standard, with a larger 2.0-litre four-cylinder turbo also set to be offered.

But let's deal with that later - it's the big boy Bronco that is of most interest. Ford isn't holding back on proclaiming its achievement: "Both [two-door and four-door] are engineered with 'Built Wild Extreme Durability Testing, Capability and Innovative Design for segment-leading 4x4 capability, long-term off-road performance and dependability."

All Broncos come with independent front suspension, twin-alloy A-arms and coilover springs up front, with a solid five-link rear axle also featuring the same springs and active bushings. As standard there's a Dana AdvanTEK independent differential unit up front, with a Dana44 AdvanTEK solid rear axle. The suspension can be upgraded with Bilstein dampers, the axles with Spicer Performa-TraK electronic locking diffs. There's even a standard 4WD system and an optional "advanced 4x4", the latter building on the base two-speed electronic shift-on-the-fly transfer case with an auto mode that allows on-demand selection of 2H and 4H. Ford says the new Bronco is "infinitely customisable" for "more capability personalisation and style". Much like the new Defender, it appears to be catering for every possible SUV taste, from park ranger to soccer mom. Which is understandable, if sometimes hard to get your head around...

Inside the new Bronco, drivers will control all of the car's considerable tech with a Terrain Management System, in which one of seven 'G.O.A.T Modes' can be chosen. Don't worry, that isn't 'Greatest Of All Time Modes' (even if Ford calls the original car the GOAT), but instead the Goes Over Any type of Terrain modes, which isn't quite so catchy. Anyway, they are Normal, Eco, Sport, Slippery and Sand, Baja, Mud/Ruts and Rock Crawl. All of which might have made Snow White more interesting. And could potentially increase mode anxiety even further...

Other points of note inside include gauges inspired by the original, cubbies and power connections aplenty and a very clever evolution of Ford's Sync4 infotainment. It features FordPass Performance, which will allow owners to plot off-road adventures - aided by integration of the 360-degree camera for a 'spotter' view and over-the-air updates to ensure the topographic trail maps are up to date. Indeed, Ford is pretty proud of the inbuilt maps; with help from NeoTreks, Trails Offroad and FunTreks, there are more than 1,000 maps available online and offline.

But who cares about the inside when the doors come off? A feature reserved exclusively to the big Bronco, Ford says both two- and four-door "make the open-air experience quick, easy and fun." Clearly a dig at Jeep, the Blue Oval also states that the frameless doors are "easier to remove than what competitors offer." On the four-door Bronco, all of them can be stored in the car with protective door bags (it would seem for the two-door that you'll have to take your chances on conditions remaining friendly to doorless motoring). As for the roof, the smaller Bronco has a three-section one and the larger one comes off in four parts. Removal is said to be a one-person job, with the quarter windows removable without taking the roof off as well. The four-door Bronco can be optioned with a soft-top and a hardtop - both of the Broncos available are going to offer "the largest overall open-top view in its class to take in the sunshine or to gaze at the stars at night."

Speaking of which, prospective buyers may well be kept up in the small hours agonising over their spec choices. Ford pitches the standard Bronco as "a no-frills SUV for those who want to customise", with Big Bend, Black Diamond, Outer Banks, Wildtrak, Badlands and a First Edition also to be launched. What on earth they actually mean we can't be sure just yet, but the information released thus far shows higher trims bring bigger, beadlock-capable wheels with larger tyres, the Wildtrak and Badlands in particular designed "for more extreme off-road adventuring". There will be 11 colour choices, 200 dealer installable accessories and the usual array of options: a Sasquatch off-road package, Ford Co-Pilot 360 driver assist and the Trail Toolbox (with Ford's 'Trail Control' hill descent cruise control and a one-pedal off-roading system) just the tip of what sounds like a very large iceberg. And if anyone says that the Bronco is a $30k SUV, tell them they're being daft - none of these new ones will leave without an option.

Still with us? Thank goodness, nearly there. Launched alongside the Bronco is the smaller Bronco Sport, also said to boast the same 'Built Wild Capability and Confidence' but in a more petite package. Indeed at 4,386mm long, the Sport is 100mm shorter than even a VW Tiguan. The three-cylinder Ecoboost is aiming for 180hp and 190lb ft, the 2.0-litre offering a targeted 245hp and 275lb ft; both will be paired to an eight-speed auto.

Though perhaps a more lifestyle kind of SUV than the larger car - aimed at "whatever weekend adventure its owner has in mind", as opposed to those who might spend every waking hour in a Bronco - the Sport is still packing plenty of off-road cred. The GOAT modes are back, as is Trail Control and the steel bash plates to protect the important bits underneath. It can even be hosed down inside like big brother Bronco (and like all the proper 4x4s, if certain bits of the internet are to be believed).

But the Sport is clearly a softer option, with reduced ground clearance and wading depth as well as less advanced hardware: the most advanced rear axle option features a twin-clutch drive unit, which can divert almost all toque to either wheel, but won't carry the kudos of a mechanical locking unit. Still, the Sport looks cool, will cost less than the larger car and "was tested in extreme conditions... as part of Built Wild Extreme Durability Testing." It's going to deal with a Spring Break surf trip just fine, basically. And there are still myriad options available, too, with five trim levels, four lifestyle packages (Bike, Snow, Water and Camping), more than 100 accessories and chunky off-road tyres.

So, say what you want about the Bronco project, but Ford can't be accused of not trying when it comes to making it appeal to as many buyers as possible. From those who just want an SUV to cruise around the suburbs looking cool in, to the kind of explorers that verge on the nomadic, it seems that the Bronco has you covered. And you can guarantee there will be plenty of people intrigued, with the nameplate absent for so long. They'll be even more intrigued given that a Bronco can be reserved from today for just $100, with full specs to follow nearer launch. As for interested parties in the UK, it's probably best to get nagging your Ford dealer - they brought the Mustang over eventually, so anything is possible...