It's big, it's Bentley and it's most certainly not bashful - PH bags an early drive in the new Bentayga

We British are funny about money. Haggling is a socially awkward exercise liable to make any true Englishman flush with embarrassment and seek to settle, whatever the cost. We mock people born to money yet sneer at those who've made a few quid and dare to flaunt it. Yet, from Rollers to Range Rovers, when it comes to building extravagant and ostentatious vehicles for the landed, yachted and private jet setting we rule supreme. When money old or new wants to flaunt it on four wheels there's no substitute for buying British. 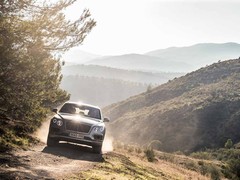 Away from its natural habitat

So to the Bentley Bentayga. If this awkward relationship with wealth is what makes us so successful at catering to it, Bentley runs the risk of testing the theory to its limit. The launch press release, for instance, sees no need to prefix the bragging with even pretence of being humble. "The fastest, most powerful, most luxurious and most exclusive SUV in the world," it kicks off, the superlatives flying thick and fast to the breathless conclusion detailing the optional Breitling dash clock machined out of solid gold. White or rose gold, to be precise. Costing around a hundred grand, give or take. 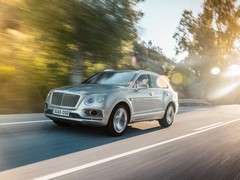 90 ECUs help manage the myriad of onboard systems

Before climbing aboard the Bentayga and scrunching toes on thick, luxurious carpet a few technical details. A 6.0-litre W12 engine under the bonnet may sound business as usual but this is an all-new unit, featuring combined direct and portinjection for the first time and twin-scroll turbos welded directly to the exhaust manifolds to respectively reduce emissions and improve response. Indeed, Bentley claims maximum torque is delivered in less than a third of the time of the existing engine. It weighs 30kg less than the current W12, features partial cylinder cut-off to run on six-cylinders under low load and - it says here - has an ECU with "1,400 maps, 1,800 curves, 33,000 fixed values and 5,100 matrices populated with data - a total of around 42,000 parameters." That's a lot of number crunching.

Other highlights? There's a nod to off-road ability with a four-level variable height air suspension system and Torsen centre diff but no vulgarities like low-range gearboxes or any pretence at chasing Range Rovers in the rough. On road an eight-mode Bentley Drive Dynamics dial offers configurations from Sport to Comfort, active anti-roll bars containing the bulk when you're pushing harder or able to decouple for wafting about in town. Bentley is the first in group to use 48V control for this, apparently increasing response and scope for the system; in total the car features 90 separate ECUs to manage the various systems onboard. Beyond that are various optional off-road modes, should you wish to test the claim of "Effortless Bentley performance, unrestrained by climate or terrain" as the press pack has it in one of its more restrained moments. 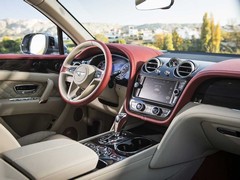 Plenty of options to tick off in here

As you might expect, the £160K starting price - comparable with the poshest

you can buy, in one of those spooky little coincidences - is merely a starting point for a world of opulent upgrades taking in 15 leather options, 17 regular colours and 90 in the 'extended range', 15 different carpet choices, seven veneers, a £21K Mulliner picnic set and that outrageous Breitling Tourbillon clock. See the 'as tested' box below for how to add over £70K to the price of your Bentayga...

Well it won't be troubling any beauty contests. But like all design it's a question of context and audience. Is Bentley betraying its heritage by building an SUV? Not really. The 'world's fastest lorries' jibe from Ettore Bugatti is probably not one featuring on the designers' mood boards but Bentleys have always been about catering to those extrovert about their wealth and eager to impress that on those around them. And if nothing else it is a successful translation of Bentley brand values to the SUV template, if not as assured as a Range Rover. 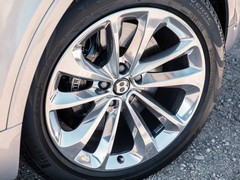 The latter has an advantage in its clarity of purpose - it's a 4x4, made luxurious. The emotional baggage of needing to put the sport into SUV is a stylistic challenge everyone from Porsche onwards will continue to wrestle with.

Everyone will have an opinion about the outside; from within it's a more comforting environment and one where Bentley's confidence about what it stands for is more clearly expressed. The traditional veneers, knurling and stitching all have a quality and substance of a class above anything else of this type and the green wellie/shooting jacket vibe is carried off with considerable panache. Gone are some character features like the chunky metal gear selector and wand-like paddles of the Continental but overall the interaction between olde world charm and new-school tech is carried off successfully. The seats are incredible too, the four-seat option featuring duplicates of the front set in the rear complete with every which way adjustment and a massaging backrest one stop short of a happy ending in its breadth of functions. 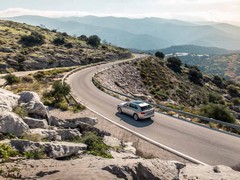 Many owners won't even sit behind the wheel. But this is PH so you'll be wanting to know how it drives, right? The new engine is more effective and linear than the outgoing one, pulling harder from low revs and delivering acceleration more mighty than a car of this bulk has a right to deploy. There's not quite the whoosh-bang excitement of the turbos spooling up you get in the old W12 but it retains that smoothness and bass enhanced sense of power Bentley owners will know and love. Expect V8s of both petrol and diesel persuasions to follow, likewise more potent derivations of the W12. For now 608hp and 663lb ft are best described as sufficient, even if the eight-speed automatic doesn't seem to appreciate the latter and insists on downshifting two or three ratios with every meaningful prod of the throttle. Better to stick to manual mode to lock in the in-gear grunt.

The variable ratio steering is as irksome as it is in the Audis that donated it, albeit not as intrusive in a car of this type as it is in R8s and Huracans. There's still that weird inconsistency of input at the wheel and output through the steering gear, not that nuances of steering feel are likely to trouble many of those who drive a Bentayga. The suspension settings on these pre-production cars were, according to programme manager Peter Guest, still not signed off, this being the official explanation for a nasty habit of bottoming out over speed bumps around town and some nasty secondary rattles from the rear axle. Increased support in Sport mode helped, the decoupled anti-roll bars in Comfort at least offering a suggestion of around town plushness you hope will be fully resolved in customer cars. 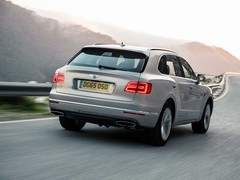 Feels more at home on the open road

It's better on the open road, where the immense power makes mincemeat of most other road users and overtakes are dismissed in a blink of an eye. Smouldering brakes from more than one launch car suggest brake pad formulations might need adding to the sign-off to-do list; there's no ceramic option yet but as and when a Speed version arrives don't rule out the possibility. Driven more appropriately it hints at the authority, gravitas and the kind of long-distance refinement you'd expect in a car of its type.

Love it or loathe it, the Bentayga honours the bombastic boasts and clearly has the potential to become a money spinner of Cayenne-style significance for Bentley. From its riff on impressive, traditional craftsmanship, the brazen extravagance and its physical embodiment of our curious relationship with wealth and status, the Bentayga celebrates Britishness in all its eccentric forms. For all those reasons the target audience are going to absolutely love it.