If there's suspicion about how solid the foundations are beneath 'new' Lotus you'd never know from hanging around on the stand. Dany Bahar flits about and glitterati from motorsport (Jean Alesi, Kimi), industry (Bob Lutz) and engineering (Gordon Murray) add a bit of weight to the proceedings. Then there's all the bold talk of range extenders and work with Infiniti on the slinky-looking

a couple of stands away. 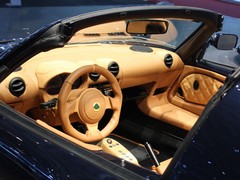 But what of the road cars? Somewhat disingenuously Lotus has removed the roof panel from the V6 Exige S, spammed up the interior with lots of quilted tan leather and declared it the fastest roaster it's ever made. The result is the lingering sense of a Lotus that's been set about by a bunch of flashy Italians ... and we'll leave the analogy there.

Interior aside it's actually a pretty tasty looking package and if you want a more appropriately minimalist cabin that's on offer too. 350hp from the supercharged 3.5-litre Toyota V6 combined with an appropriately Lotus-like 1,100kg kerbweight result in some pretty spectacular-sounding numbers - 0-62mph in four seconds dead and 0-100mph in 8.5 seconds. It's no vmax hero, topping out at 145mph rather than the regular S's 170mph, but it'll be fun getting there no doubt. Stripped of the coupe S's aero the roadster version does look pretty cool and, cynicism aside, we're itching to have a go. 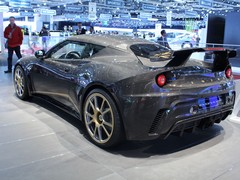 Production of Evora GTE has started

Like the regular S the roadster gets a six-speed manual but Lotus will also offer it with the SPS (Serial Precision Shift) automated manual. And there's also the choice of a more street-oriented suspension set-up or a track-optimised one with the Race Pack, tuned to get the most out of the P-Zero Trofeo tyres. Race Pack also gets an override switch for the exhaust valve and a four-mode Dynamic Performance Management (DPM) with launch control. The track mode on this is, according to a spokesman, especially impressive.

Away from the road cars and rather more in the background is Lotus's involvement with the Infiniti Emerg-E and the realisation of the potential of its range extender engine. A chat with Director of Engineering Mark James underlines how important this is for Lotus, the modular approach - there are three states of tune available for the motor - meaning it can offer a variety of off-the-shelf packages to suit applications in a number of different cars. If Infiniti is serious about the Emerg-E, a high-profile mainstream collaboration like that would be a real leg-up for Lotus's 'other' business. At the core of this is the Evora 414E revealed at a previous Geneva show (see earlier stories here and here for the background) and underpinning the Infiniti. 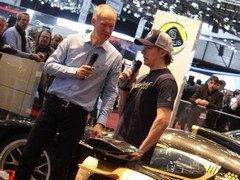 Legard tries to make out what Kimi's saying

Behind the scenes tie-ups with major industry suppliers like Spanish concern Fagor Ederlan will, it's hoped, pair Lotus innovation with mainstream OEM manufacturing capacity and there's an inspiring sense of focus and optimism that seems a different world from the glitz, glamour and celebrity-fixated race and roadcar side of the business. Fingers crossed...