Priced from £185,500, the High Performance Hybrid signals a new era for McLaren Automotive 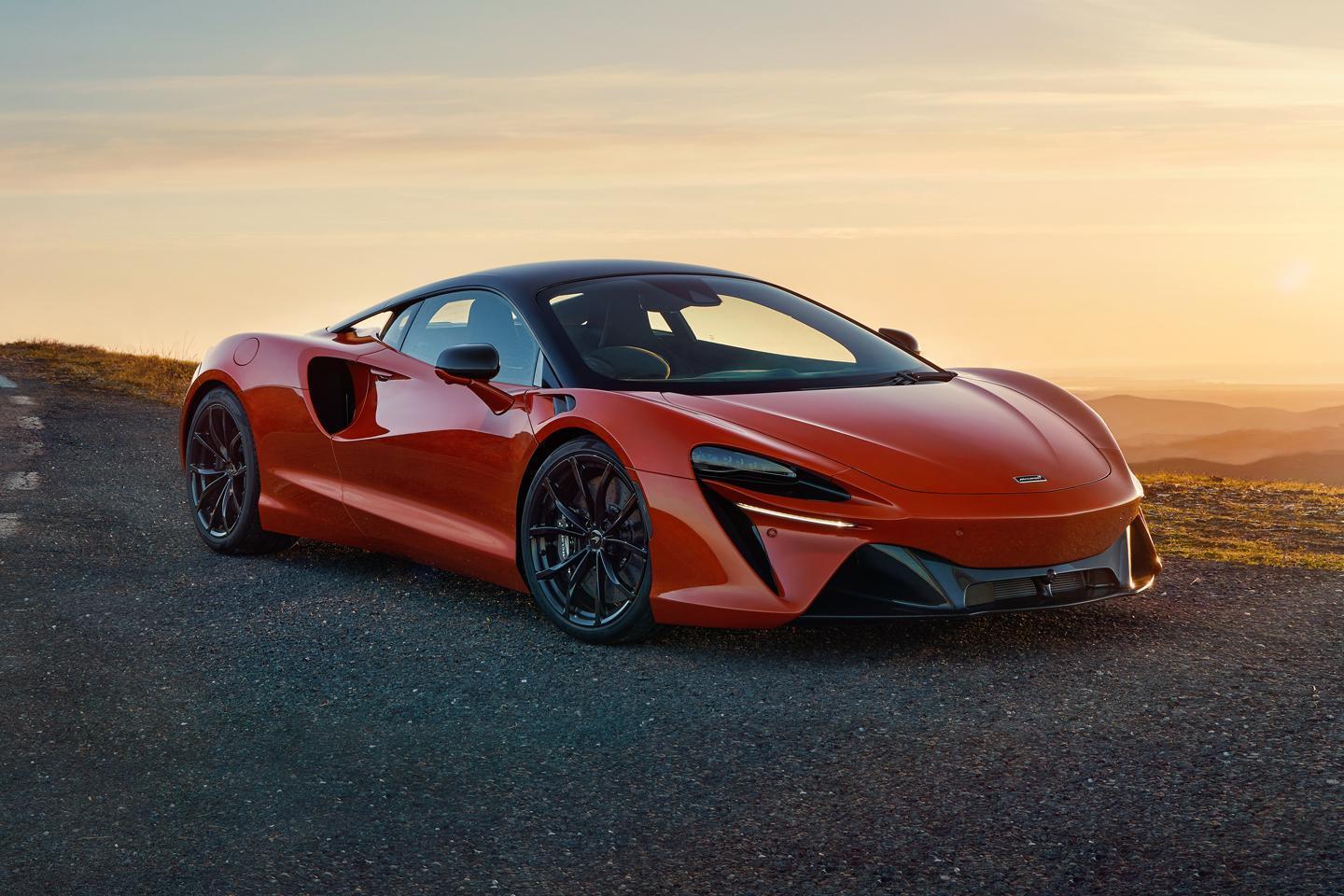 Twelve years ago, McLaren Automotive revealed the MP4-12C. The mid-engined, V8-powered supercar was less a shot across its rivals’ bows than a mortar shell in their conference rooms. The resulting production model was imperfect, of course, but it announced the firm as the most serious high-end performance brand to emerge in a generation. Woking would not content itself with building absurdly niche products, it was coming for Ferrari and Lamborghini and even Porsche with the same merciless will to win that had delivered it multiple F1 titles.

Now, in 2021, having suffered during the pandemic to a much greater extent than its closest competitors, McLaren comes again. Financial strife aside, its ability to make scintillating road cars is now not in question, and you get the impression that everything it has learned in a decade of sticking it to the established order has been delivered into its latest car – a must-win supercar that fires the hybrid starter pistol in a way that neither Ferrari nor Lamborghini nor even Porsche has done in a model that is intended to be widely available.

Perhaps even more so than with the MP4-12C, success is not guaranteed. Supercar buyers like turbocharged V8s. They like naturally-aspirated flat sixes. They really like V10s. It is not immediately clear how much they like the prospect of a turbocharged V6 with an electric motor attached – a combination they can find in any number of comparatively humdrum products. Previous attempts to sell petrol-electric hybrid supercars to enthusiasts have hinged on supreme exclusivity and prodigious performance – see the Ferrari SF90 Stradale for the latest example of the trend. The High Performance Hybrid does not have 1,000hp or all-wheel drive. It’s more nuanced than that.

For one thing, it has a proper name. McLaren has not risked another numerical badge, and while Artura doesn’t immediately slip off the tongue, it’s relationship with Arthur means it comes loaded with marketable meaning for its maker. For another, it’s light. Really light. McLaren claims that dry, the car weighs 1,395kg, which is only 39kg more than a 600LT - which is bonkers for anything with a gearbox-mounted electric motor and a 7.4kWh battery to package. With fluids and 90 per cent fuel load, it is said to tip the scales at 1,498kg – a credit to the new Sheffield-built McLaren Carbon Lightweight Architecture (MCLA) which underpins the car.

More on that in a moment. Best we start the deep dive on the new engine, because that’s where McLaren needs the special sauce to be Tabasco-grade. The 2,993cc V6 splits its banks at 120 degrees, some 30 degrees wider than the Ricardo-built V8, which not only helps to lower the centre of gravity but also clears space to mount the twin-turbos inboard, in a ‘hot vee’ configuration. This means the 160kg V6, which is 220mm narrower and 190mm shorter than the 4.0-litre V8, can use shorter pipework for quicker responsiveness. The symmetrical mono-scroll turbochargers also use ball-bearing technology to reduce friction and electronically actuated wastegates “that can instantly adjust position regardless of system pressure”.

McLaren claims throttle response is twice as fast as the V8 from its new dry sump V6, which outputs 585hp at 7,500rpm and 431lb ft of torque from 2,250-7,000rpm without any assistance from the electric motor, emphasising its elasticity. Encouragingly, it has an 8,500rpm redline. The axial flux electric motor supplies 95hp and 166lb ft on top of that (offering a 33 per cent improvement on the P1’s electric power density), with its efforts channelled into a new, closer ratio eight-speed gearbox. Additional weight has been saved by making the motor responsible for reversing, removing the requirement for a dedicated ratio. Impressively, the motor adds just 15.4kg, the battery pack 88kg, with the entire hybrid setup said to account for 130kg combined. The battery can be charged to 80 per cent in 2.5 hours using a standard EVSE cable, with in-built regenerative tech ensuring there’s always some power even when its otherwise depleted.

The Artura is said to sprint from 0-62mph in 3.0 seconds, 0-124mph in 8.3 seconds and 0-186mph in 21.5 seconds. Top speed is an electronically limited 205mph. Those numbers edge the first High-Performance Hybrid close to the fixed rear wing of the Sports Series run-out model, the 620R, although McLaren is promising a more rounded sort of supercar. When PH was invited to Woking ahead of the reveal, McLaren director of product strategy Jamie Corstorphine said that this £185,500 newcomer is “more broadly capable than the 720S”, with a higher level of comfort – and, of course, the ability to cover ground without the engine on. In pure EV mode, the Artura can do up to 81mph, although plainly the intention is for this setting to be used predominantly in an urban setting. On paper, the car gets a WLTP combined economy of 50mpg and a CO2 output of 129g/km, which is obviously important when it comes to selling it in some of the world’s most strictly regulated markets.

Those game-changing figures are obviously aided by the innovations delivered in a monocoque that’s lighter, stiffer and better packaged than ever before. The new carbon fibre platform, aluminium crash beams and rear subframe are joined by a “first-to-market domain-based ethernet electrical” architecture which is said to save 10kg alone and speed-up the car’s many digital features. The Artura sports a front upper wishbone that’s mounted directly to the monocoque, while the lower wishbone is attached to the aluminium crash subframe. The rear subframe is bolted to the monocoque, with the carbon fibre floor beneath the battery providing a traverse bridge for the lower cross members. As you might expect, this ensures high torsional stiffness while keeping weight to a minimum. It also clears space for a bespoke rear diffuser; McLaren reckons the geometry of the new multi-link wishbone rear suspension “is particularly aggressive”. Nice.

The packaging certainly translates well on paper, with a front-to-back weight distribution of 43/57, and even better in the words of McLaren’s director of chassis and vehicle technology, Pascali Leonardo. He spoke to PH about minimised inertia under full throttle and heavy braking, a super reactive front end that retains an electrohydraulically-assisted (hooray) rack, and an electronically controlled rear differential that starkly contrasts the open-diff normally used by Woking’s engineers. Leonardo said to expect more performance and stability at speed, with a “more progressive slide” on throttle, should you want it. Coupled with the rapid throttle response and wide torque window, Leonardo said the Artura provides greater control and – key for those of us in Britain – “brilliant wet weather handling”. In fact, much of the car’s development focused on ensuring that its Pirellis (of which three model-specific compounds are offered) are effective on low-grip surfaces. Adding to the usability are new drive modes that enable an individualised mix of chassis, powertrain and gearbox settings.

The proportions give the Artura real intent while ensuring this is still a compact supercar, with a wheelbase of 2,640mm, overall length of 4,539mm and width of 2,080mm including the mirrors. It’s narrower than McLaren’s other cars to address complaints from customers regularly faced with urban width restrictions – but the knock-on ought to be even more space to play with on B-roads. It feels the part inside, where narrower sills do not undo the impression of sitting low in a carbon-fibre bathtub. The view out is exceptional - an admirable McLaren trait - and the switchgear tidier. Gone are the fiddly drive control buttons, in their place rotating dials that sit immediately behind the wheel and offer one-touch operation that won't require you to remove your hands from the steering wheel. The digital stuff is all said to be much, much faster and simpler to use.

McLaren didn’t start up the Artura during our showing, but Leonardo reckons the V6 is “more refined” than the V8 and has a “nice crescendo”. We’re told to expect less vibrations overall thanks to new hydro engine mounts, which filter out the undesirable rattles from an engine located just over your shoulder while retaining all of the “desirable sensations”. Apparently, it makes the V6 feel relaxed at low revs, and frenzied beyond – albeit with likely softer tones. McLaren is well aware of the risks associated with downsizing the engine (not to mention the less than brilliant reception the V8 enjoyed), so it's likely to have worked hard in this area. The team's certainly thrown some hardware at the job; the Artura gets ultra-short pipes with "optimised resonators" to enhance the V6's "harmonic and full-bodied exhaust note”. According to its maker, the “delta” between on- and off-throttle sound “is the greatest of any McLaren to date”.

If the soundtrack matches the performance of its new and innovative powertrain, the Artura will have gone a long way to fulfilling its obvious potential. McLaren has given the car a staggering amount of bases to cover, yet in typical fashion it has pursued them all with what seems like remarkable diligence, promising a level of engagement at a wider range of speeds in a wider range of conditions than ever before. Factor into that the increased refinement and future-proof efficiency of a part-electric power source, and plainly the manufacturer feels like it can appeal to more people, more consistently than it ever has done before. It will need to - the Artura's starting price puts it in the same ballpark as the F8 Tributo, probably the best all-round mid-engine supercar you can buy. It's significantly more expensive than the 992 Porsche 911 GT3 revealed 12 hours earlier. But McLaren would probably argue those cars belong to the previous decade and past ambitions. The Artura is all about right now.