Teaser pic previews the launch of another Ultimate Series model; this one fulfilling the extreme track car brief

Last month it was the

; this month it's the P15. Last month it was the 'fastest' McLaren ever; this month it's the most 'track-concentrated' road car Woking has yet built. If the firm appears to be hedging its bets, that's because it most certainly is: the Ultimate Series is all about exclusivity and extreme performance - and coming at the equation from both ends does rather sew up the market for million-pound hypercars. 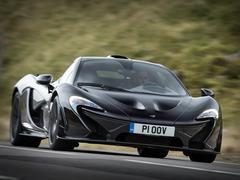 In the BP23's case, McLaren treated us to some pictures of a development mule (so as to show off the centre-mounted driving position); with P15, we only get a preview image of the car's new triple-pipe exhaust. This is important because unlike the BP23, which features a hybrid powertrain, the P15 is very likely to rely on a combustion engine alone (a little for purity and a lot for bettering

Expect that engine to be the familiar turbocharged 4.0-litre V8, but also expect it to be tuned well beyond the 720hp produced in the current 720S. And as McLaren has stated that its 'brutal' design will be the most elemental expression yet of its 'form follows function' philosophy, it can safely be assumed that the firm has doubled down on the kind of active aero features that pay dividends on a pit lane stopwatch. 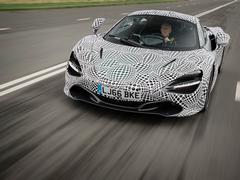 Its circuit focus notwithstanding, Woking has confirmed that the 'ultimate' track car will be road legal (experience with owners converting their P1 GTRs for road use has taught McLaren the value of a number plate), although it pointedly suggests that daily usability has been 'sacrificed' in the pursuit of raw handling talent; a characteristic which coincidentally helps distinguish the P15 further from the 'hyper-GT' status of the BP23.

While it has been teased second, it'll comfortably beat its sibling to customers. The model is due to be publically revealed in Geneva next March (having already been shown to customers) and will likely be delivered by the summer - probably just as the BP23 is officially unveiled. The clockwork timing of all the cloak-and-dagger stuff is admirable - not least because it's not entirely necessary: McLaren having sold out all examples of both cars months ago.