If you thought the stats were wild, wait until you hear how it goes...

came out and the general sense was of a very nice product, but possibly something a bit too bookish to really take on Ferrari and Lamborghini? Sure, it was fast and the ride quality was exceptional for a supercar. But the looks were a little timid, it sounded a bit flat and stuff like

drifting and larking about

were seemingly 'sub optimal' for McLaren's studious, F1-honed sensibilities. All very on-brand. But what's a supercar if it's not a bit wild and attention seeking?

Just hearing a 720S at full chat from the Vallelunga pitlane is enough to tell you how much McLaren has learned about building supercars in such a short space of time. On approach the flat howl of the new 4.0-litre V8 echoes off the concrete walls and bounces around the paddock. Gear changes whip through with a gunshot-like crack from the exhausts. And if the driver is properly on it that fierce exhaust note gets a backing track of the new twin-scroll turbos whooshing air into the engine, a sound that rises to a piercing shriek as the revs head towards the 8,200rpm redline. Lack of drama you say? Not in this second take on the Super Series formula.

It's a wild-looking car too. Like a piece of music you only really tune into after three or four listens the 720S challenges as much as it excites. It combines very McLaren functionality like those controversial 'eye socket' lights with more sculpted and organic surface detailing on its vent-free sides. The cab-forward stance, the butterfly doors and huge glasshouse are immediately exotic, the glimpses of heat-stained exhaust and exposed gearbox within the rear diffuser offering visual reminders of both the weight-saving minimalism and the power within. 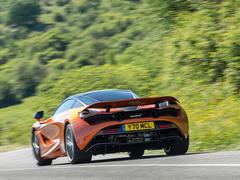 And the performance really is astonishing. The stats offer a hint, the 720hp and 568lb ft from the 4.0-litre evolution of McLaren's twin-turbo V8 instantly winning the all-important Top Trumps battle with the

. The 488 is a savagely fast car yet 50hp down on the McLaren out of the blocks. It's closer on torque, the Ferrari V8 delivering 560lb ft. But by the favoured dry 'with lightweight options' figure offered by both brands the McLaren is an astonishing 83kg lighter than the Ferrari. The result is plain to see and equates to half a second off the Ferrari's 0-125mph time, or 7.8 seconds. The Huracan? Over two seconds slower by the same measure. The 720S is a tenth faster than the

too, supposedly McLaren's most extreme and track-focused model this side of the P1. 212mph is no mean bottom line figure either.

You can try and digest the numbers, but you really need to experience it. In the build-up to driving the car we'd been promised a need to 'recalibrate' performance expectations. Settling the nose with a brush of brake before pitching into Vallelunga's very grown-up Curve Grande, fifth gear hauls with utter conviction before erupting in a violent rush of boost. You may think you're going pretty well at this point. Before realising the throttle pedal has about another inch of travel left to go. Gawd.

Major selling points of the Super Series over the 'junior' Sports Series cars like the 570S are active aero and the second generation of the ProActive Chassis Control, the original system introduced with the 12C. The 720's LT-style full-width rear wing emerges from the rear bodywork and delivers the kind of meaningful downforce you really need in a corner like this, the 720S pinned to its line and readily putting all that power to the track through its P Zero Corsas. A double-apex hairpin appears in short order and with it a need to shrug off an awful lot of speed. In airbrake mode the wing gives you confidence-inspiring stability under pedal pressures that feel like they'll force your foot through the floor of the carbon tub. The dampers help too, supporting the front end from pitching too hard as the ceramic brakes seemingly tear chunks out of the track surface. 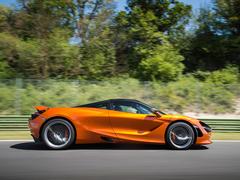 The hydraulic steering has a welcome amount of weight and response is expertly judged for an aggressive turn-in, without the hyperactivity you get in a 488. A smidge of understeer if you've gone in a bit hot is clearly felt through the wheel but can be neatly bled off by trailing the brakes or lifting slightly. And though there's no hiding the forced induction there's way more response and mid-range than in previous McLarens, making it easier to balance on part-throttle before fully letting rip as the lock winds off.

At this point the Ferrari would display its more exuberant side, its active diff locking up and offering a more flamboyant exit. McLaren has stuck with its open diff and Brake Steer combination on the basis that it's lighter and more effective for out and out traction. With this much power you can feel the interventions from the stability control up to fourth gear and beyond, the deployment 'constructive' rather than scolding. You feel the tugs on the leash though, the inevitable temptations of the ESC button tempting you into your first foray...

With the first push comes Dynamic ESC and access to the 720's new Variable Drift Control. Yes, McLaren using the D-word. Who'd have ever thought? Coming from brake inputs rather than the diff like it does in the 488 its input is inevitably 'softer' but has the same goal as Ferrari's Side Slip Control. With a simple slider on the touch screen you dial in as much angle as you feel comfortable with and let rip. In its meekest setting it'll hold the line under full throttle and just on the cusp of oversteer, even if you floor it mid-corner. Swipe all the way right and you need to be ready with the corrective lock, because it will come all the way round if you're not ready to catch it. Even in this mode it's not about sustained slides, that use of 'Drift' in the branding somewhat misleading. This is a still driver aid, not a showboating mode. But it does let you play with the 720's attitude on the throttle to a level you're comfortable with. 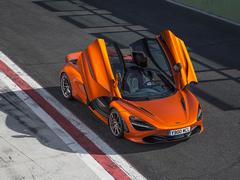 For all that confidence inspiring support there is an underlying and unbridled aggression to this car not seen in the 12C or 650S that puts clear ground between it and the Sports Series. Even in the mid-way Sport mode the dual-clutch shifts crack through without a moment's hesitation; in Track you get the shift almost as quickly as you think of it. Though here a flaw in McLaren's two-way 'rocker' style paddles is apparent - if you flick it and just let go it can rebound back the other way, immediately downshifting back to the gear you were just coming from. Holding your fingers on the paddle damps it enough to prevent it happening again, but it's another example of how the 720S forces that recalibration of inputs.

So it can do extreme. But all this lurks within a car that just an hour previously was demonstrating an admirable ability to waft through Rome traffic and dice with the locals on the city's ring road. McLaren will tell you the 720S's breadth of ability pretty much encompasses 570GT through to 675LT in one package. That's a bold claim and dependent somewhat on how you option the car, there being the choice of Luxury or Performance packages, the latter introducing more LT style elements like fixed-back seats and lashings of Alcantara.

The 720 demonstrably puts much-needed distance between the Sports Series and this new second-gen Super Series. Previously you could come out of a 570 and into a 650 and, without appreciating some of the extra tech like the aero or ProActive Chassis Control, wonder what you were getting in the more senior car. The LT-like responses in even the most relaxed settings and fact you have to proactively choose Comfort mode from the Sport default are your first hint of McLaren's ambitions. Even backed off it doesn't quite flow like a 488 can in its 'bumpy road' setting, the characteristic damper rattle found in all McLarens detracting from the still impressive ride comfort. This and the odd wobble through the steering column are rare intrusions on the sense of calm you get in 'normal' driving; overall it's still very good though, with sufficient compliance to both deal with the worst of Italian tarmac and offer a sense of weight transfer in the corners. 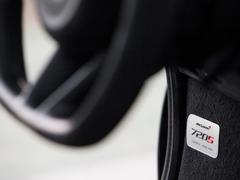 Extraordinary as that is, the really impressive thing about the 720S is that you get a sense of what it can do even when you're just pottering around. McLaren's obsession with things like steering feel and control response means Elise level communication in a car with more than three times the power. That it can do the hardcore track thing but also give you something back at fast road pace is a real achievement, the impression of McLaren really finding its feet and asserting itself over the competition something really rather exciting to witness.

Now, if they can just gift some of that magic to the F1 team...