Ever wondered what Mad Max in Malvern would look like? Morgan has the answer 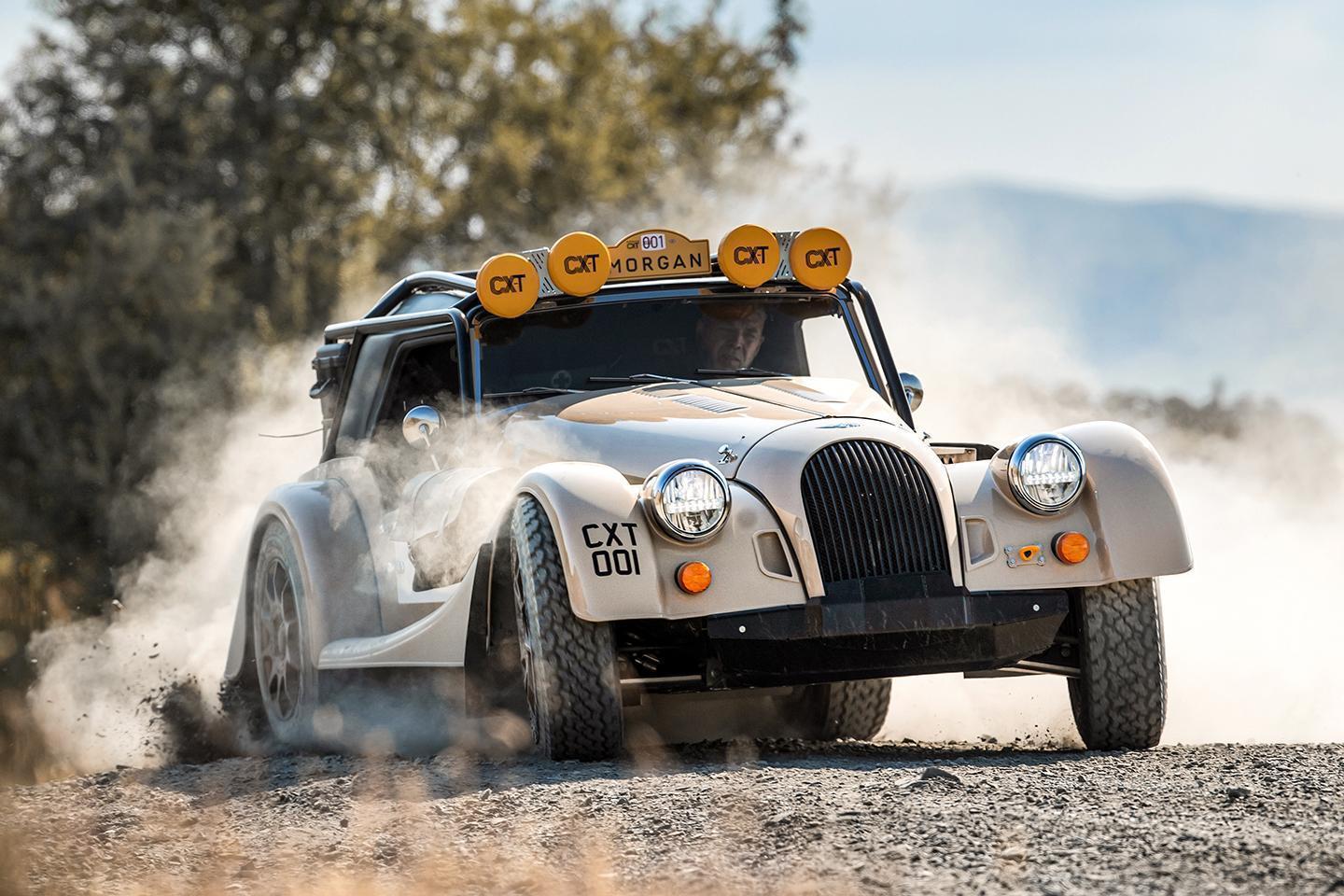 If there's one off-road fad we're very big fans of, it's the off-road sports car. Which means the Ariel Nomad, mostly, but Ruf's Rodeo also looks superb, as does whatever Porsche is cooking up with its own high-riding 911. And we all loved the one-off Bentley and Caterham on the Grand Tour, right? There's something about the incongruity of a sports car designed for the very opposite of its intended purposes that makes them hard not to love. Shame it doesn't work the other way for track focused SUVs..

This is the latest entrant into the fray, the Plus Four CX-T. Looks brilliant, doesn't it? Like the vicar who's now a marine and never looked more at home. Morgan has partnered with Dakar experts Rally Raid UK to build the CX-T, so this is certainly not all mouth and no combat-trousers as far as off-roading goes. It celebrates Morgan's history in trialling (hence the 'T' in the name) and aims to show how durable its new aluminium architecture is (which explains the 'CX', the name of that platform). The Plus Four is designed "explicitly for overland adventure."

To that end, the CX-T has been significantly overhauled from standard. Perhaps the most obvious external change is the exo-skeleton, followed by the replacement of the rear panel with an equipment rack - complete with Pelican luggage cases, a Zarges aluminium storage box, two spare wheels and Rotopax containers. There's even recovery equipment back there for those that get really, really lost on the moor. Should that be a bit too adventure-y, the CX-T's new composite roof arrangement can be adapted to carry bikes or surfboards, and the doors can be mounted up there as well. Because lifestyle.

Behind those chunky all-terrain tyres sits some very complex (read: expensive) suspension. You might know EXE-TC for its motorsport set-ups - its suspension has been under nine WRC title-winning cars - and a set of its coilovers are fitted to the Morgan. For the CX-T they are "calibrated to provide the ideal balance of compliance and durability." Helping them out are new bushes for the lower arms, Plus Six wishbones and modified wheelarch apertures to allow the suspension to work through all its travel. There's said to be 230mm of ground clearance and a fairly serious-looking five-piece underbody protection line-up, should you stray over the limit. When even the exhaust has been altered to benefit rough and tumble motoring (it's now a rear side-exit), you know this project hasn't been taken on half-heartedly.

Though still a two-wheel-drive, manual Plus 4, the CX-T does benefit from the fitment of half a BMW xDrive system out back as well as a shorter final drive ratio. The rear electronic diff has bespoke software for this unique application, with drive modes for it depending on conditions (i.e. the settings adjust how much locking is done). 'Road' keeps it fully open, 'All-Terrain' gives about 45 per cent locking and 'Extreme' locks the diff entirely - specifically designed for low traction surfaces. Or, presumably, doing excellent skids. But you didn't hear that from us.

To assist CX-T drivers in living out their nomadic fantasies (no pun intended, sorry Ariel), the Plus Four's cabin has had a makeover as well. The aim was to "improve occupant comfort and usability in remote environments", and thus the Morgan comes with a RAM mount track to fix a phone or camera securely, a map light and notebook holder. There's also a cool bag and map holder in the passenger footwell and first aid kit mounted to the internal roll cage behind the seats.

Rally Raid UK's Mike Jones said of the CX-T: "Having the opportunity to design a car for such a prestigious marque has been a responsibility that I never imagined I would have. Rally Raid UK and Morgan have engaged with industry leading suppliers to source the highest quality components, as well as designing a range of bespoke parts that will remain unique to the model. The Morgan Plus Four CX-T is a genuine overland adventure vehicle and I look forward to seeing the incredible destinations that owners will find themselves in."

There won't be all that many customers, however. Like the Plus 8 GTRshown earlier this year, the CX-T will be made in extremely limited numbers. Just eight are to be built, priced from £170,000 plus the vodka and tonic. So, er, £200k then. Which is a lot. But the cool stuff seldom did come cheap. The CX-T is on sale now, and all eight should be built by the end of this year. We'll race you...