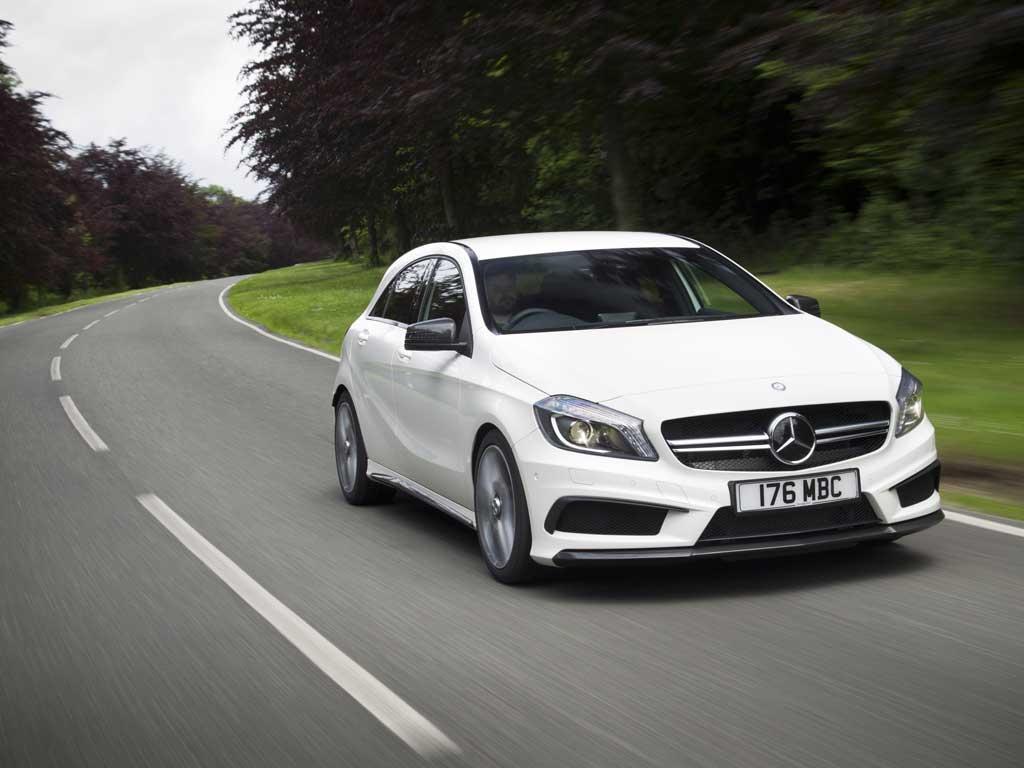 Well, they certainly stuck to their guns. Almost exactly a year ago I watched a heavily disguised A45 AMG fire its way up a Swabian hillside and couldn’t quite believe how loud the exhaust bangs were on each upshift. Several months later I asked the man from AMG whether these would make it into the full production specification, assuming that they would not. He insisted they would.

Read our Mercedes-AMG A45 facelift review

Given the company’s recent track record of vehicular noise, and the quality thereof, I really shouldn’t have ever doubted them. I would like to say that the A45, driven with the automatic gearbox in manual mode and using all the available engine revs, sounds like a racing car. But given the increasingly stringent race-track noise limits in the UK I think that the comparison is unfair. The A45 sounds better than any BTCC machine.

It’s probably a good deal faster in a straight line too. With 360hp and 332lb ft pulling 1,555kg it always feels very potent, but the power delivery is something of a surprise. Peak torque arrives at 2,250rpm and plateaus until 5,000rpm, but peak power isn’t produced until 6,000rpm. On the road this equates to vast, low effort performance for overtaking, but leaves a delicious kick at the top end. The way the motor revs beyond 5,000rpm and delivers a decisive extra surge that moves it into a performance category beyond even the RS3 and M135i is unexpected. It’s urgent, free-revving and at those high engine speeds doesn’t feel in any way turbocharged.

The noise is unspectacular when you’re not trying, but it’s never harsh. Mechanical refinement is good, but you get the feeling that AMG felt the need to allow a low-level fizz to be transmitted from the engine block to the bodyshell. Curiously, and much like the best Honda VTEC installations, the A45’s powertrain is smoother and much more musical further up the rev range.

The gearbox is an all-new AMG developed seven-speed double clutch unit and, like the motor it has been tested to destruction by machine and engineers. AMG always seems to be completely out of sync with the rest of the world when it comes to transmissions. Five years ago when the world was going dotty for dual clutch systems, AMG gave us a seven-speed wet clutch automatic, which was rather impressive. In fact I suspect its robustness and usability in fast cars probably strongly influenced the brilliant new ZF eight-speed auto ‘box which has quickly established itself as the new benchmark over dual-clutch alternatives in everything from luxo-saloons down to the little M135i. So, everyone now wakes up to the possibilities of a fully automatic transmission, whereupon Merc gives us a dual-clutcher.

It’s a very good effort, not quite the fastest or most incisive ‘box out there, but it is pretty damn good. In auto mode it’s utterly painless and uses the torque curve with great efficiency to help return well over 30mpg when you’re tootling along. I found it a bit frustrating that you could override the auto mode with a quick paddle flick, but couldn’t send it back into auto without fiddling with the mode switch by the gearlever. In other Mercs you just pull the up paddle beyond seventh and it re-selects D. Small point, but it would irritate me over a year’s driving.

Perhaps the biggest question hanging over the A45 was the potential contamination of any kind of chassis enjoyment by the evil that is called Haldex. Yes, the same 4WD system that has blighted VW products with understeer lurks under the skin of this car. On the road, the car neither under nor oversteers. It just demolishes anything in its way. The ride is firm, in fact it tippy-toes right on the edge of what is acceptable in town and at low speed, but then it rewards you as you travel faster. The quality of the damping shines through, it remains flat but doesn’t get deflected and the payback for the firmness is an agility that must render the A45 one of the faster point-to-pointers on sale. Certainly, on a mixture of A- and B-roads a C63 wouldn’t see where it had gone. Nor would anything in that class. Torque, traction, grip, dimensions, no deflections, no understeer; the A45 is perhaps the perfect road recipe. And that’s before it rains.

On the track it is miles more fun than an RS3. Provoke it harshly and the rear axle will begin to rotate, but it never feels like it’s rear-wheel drive. It also never feels like, say, a Mitsubishi EVO with its insane turn-in and instant oversteer. But it’s fun and very effective, helped enormously by electric power steering that is bettered only by the new GT3’s system for weight and sense of connection and a truly brilliant brake pedal. Can’t remember the last time I had such confidence in road car brakes.

Some people think the cabin is too chintzy; I don’t. The new electrically adjustable Recaros are superb, the wheel is standard issue AMG, as is the snazzy gear selector. They’ve done a good job covering as much of the ordinary A-Class undergarments as possible, although the hard plastics down by the centre armrest are pretty nasty. And of course the electric handbrake is utterly hateful. Then again, once you’re used to it, the way you can open the driver’s door to trigger the gearbox into Park is a stroke of genius for everyday use. Until you’re accustomed to it, that is – up until this point you might head-butt the steering wheel.

So it’s great fun to drive, indecently fast, sounds good under duress and is laden with standard equipment – but is it really worth £37,845? Not if you’re making the usual PH comparisons with used M3s and the like. But the world doesn’t always work like that. Factor in a decent finance deal (ducks) or people who just want something discreet, effing fast and untouched by another’s bottom and it doesn’t look too pricey to me.

Of course you can go loopy with the extras list. The car I drive had carbon exterior mirror housings for a mere £1,230. The Comand sat-nav thing is a silly £2,100. Then again, to drag an M135i up to a similar spec as the A45 reduces the price difference considerably. I shall do this when we release the twin-test video in a few weeks.

No, the lingering impression here is of a car with immense talent and much to offer many people. I just wish AMG had been given free rein to add some wider arches and give the car some more, well, stance. The RS3 is trounced by this car in just about every department of driving dynamics, but Audi knows how to sell cars and those wide arches and suggestive ride height are showroom gold. From the rear three-quarter the A45 does have some menace to it, but in your rear view mirror it is quite innocuous looking. That will endear it to those looking for subtlety, but I suspect they’re in the minority in this marketplace.

Otherwise, I thought the A45 was mostly brilliant.