If the Golf R laid the groundwork for the four-wheel drive premium 'mega hatch' format then the real beneficiaries have clearly been Audi and Mercedes. They took the idea and ran with it, busting through the £40K threshold with the

, many owners reportedly happy to push on to £50K with a few choice options as well. Capable cars both, but does the hot hatch format really stretch to this price point? 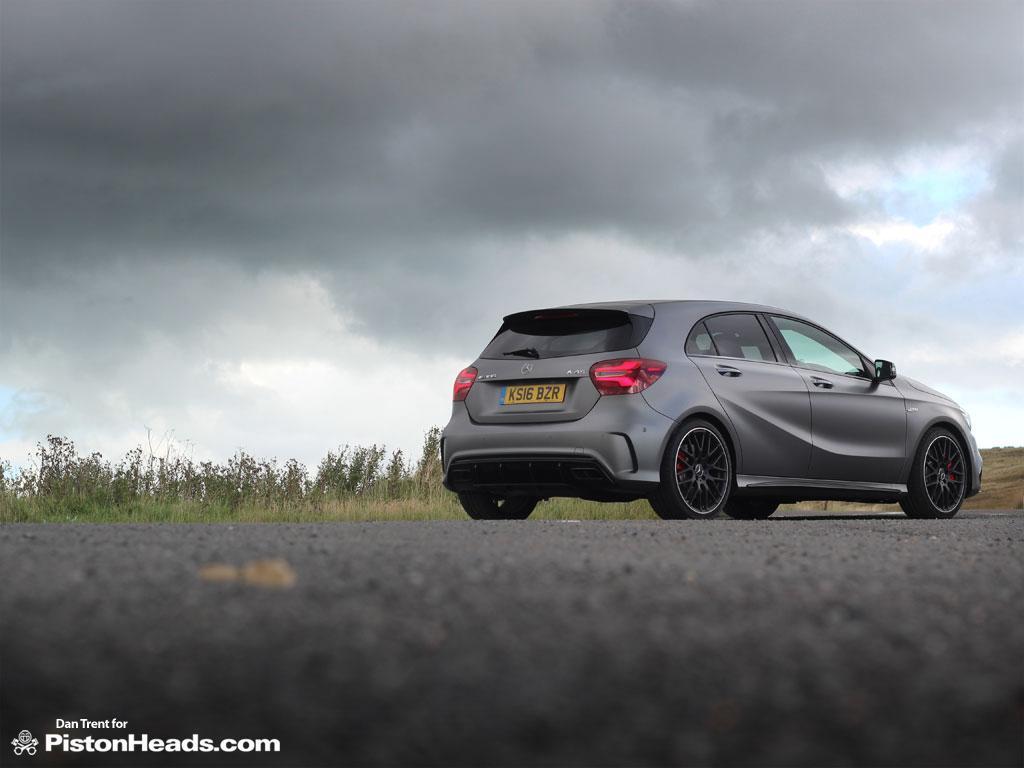 If it does the stage is now AMG's own, RS3 hatch production having now finished as the emphasis shifts to the newly announced RS3 saloon. The A45 hasn't rested on its laurels though, a range-wide A-Class update last year including surprisingly extensive additions to

as detailed in our

. In brief though these included a power bump from 360hp and 332lb ft to 381hp and 350lb ft, shorter gearing and an optional Dynamic Plus package. This latter feature is the most interesting, bundling two-stage adaptive dampers with a mechanical limited-slip differential on the front axle to complement the existing Haldex-style four-wheel drive system.

All we needed were some suitably bumpy and greasy roads to put these new features to the test, not something one would usually struggle to find in the middle of the Pennines. The rain never came and the tarmac remained resolutely dry and grippy; if we wouldn't be getting the best from the diff we'd at least get to put the damping through its paces.

More of the same
Previous experience of the pre-facelift A45 on these very roads indicated a superficially fierce low-speed ride that'd have more consumer-minded road testers digging into their bag of cliches for 'rattled fillings' and 'chiropractor fees' complaints. Here at PH we're made of sterner stuff though. And pushed harder the A45's original set-up showed real class, the fierce compressions and mid-corner lumps on these roads swallowed without fuss and letting the fearsome turbocharged thrust of that 2.0-litre engine and the four-wheel drive traction really prove their worth. We've said it before but AMG's first hot-hatch is no half-hearted effort - new to the genre or not, the A45's sheer ferocity successfully makes good on that premium over a Golf R and is more intense than the RS3's torque-rich power delivery from its more charismatic five-cylinder motor. 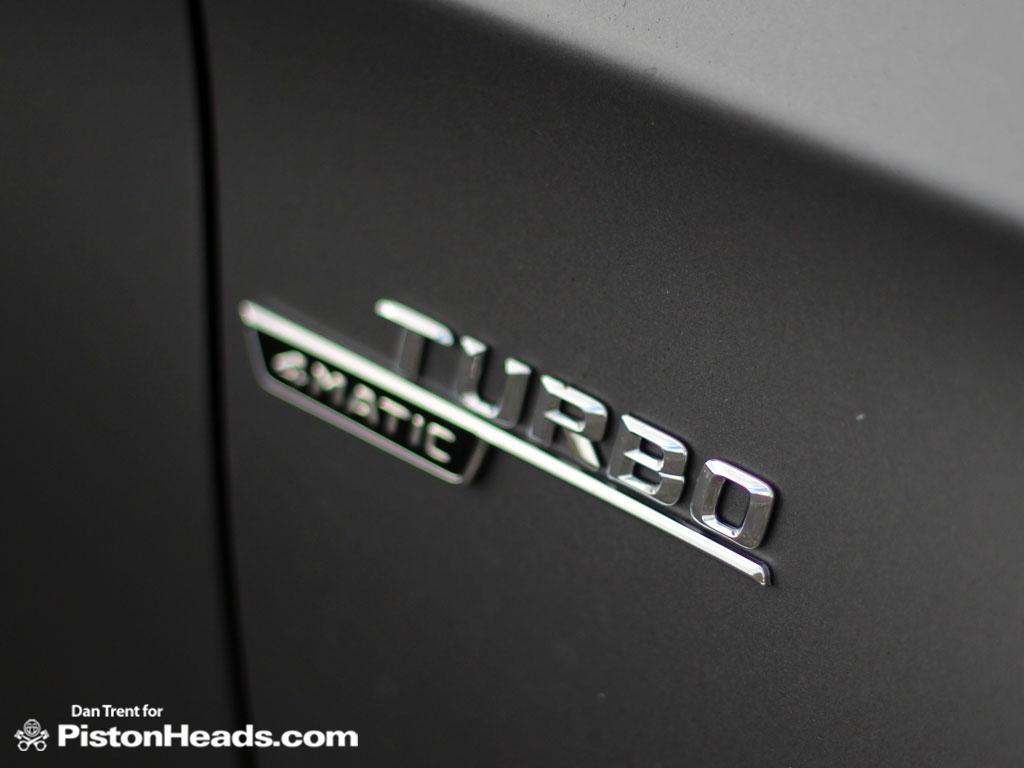 Closer gearing and the extra grunt are claimed to flatter the power delivery but it'd take a back to back drive with a pre-facelift car to really spot the differences. Certainly it pulls harder than ever, the transition from off-boost to on dramatic and hugely exciting when it comes. With over 190hp per litre from a four-cylinder engine there's no hiding the forced induction and AMG's motor feels boostier than the more linear Golf R; catch it in the wrong gear and the lag is noticeable, but you're not left waiting for long.

The seven-speed dual-clutch has satisfyingly chunky metal paddles if you want to take control yourself but, even in manual mode, has some annoying quirks. Chief among them is a habit of dropping two or three ratios when you only needed one, an overly dramatic block downshift from fourth to first on one occasion a typical example. It's a common feature of all AMG transmissions from GT down and no less annoying for it - one tug on the paddle should mean one gear down, and the inconsistency of the response as it tries to second guess your motives can result in an ugly battle between man and machine just when you don't want it.

Rotary club
Other niggles include the duplicated rotary dials buried down low in the centre console; the one behind the gear selector controls the driver modes while the one behind that is your main interface with the infotainment, meaning it's easy to select Race mode (additional with the Dynamic Plus pack) when you were meaning to phone home while sat in traffic. Or switch radio stations when you wanted maximum attack mode for an enticing section of moorland road. A tiny boot and yawning quality gap between standard A-Class switchgear and pimped up AMG-level trim also irritate, the latter a dropped ball against Audi that Mercedes can't really afford at this price point. 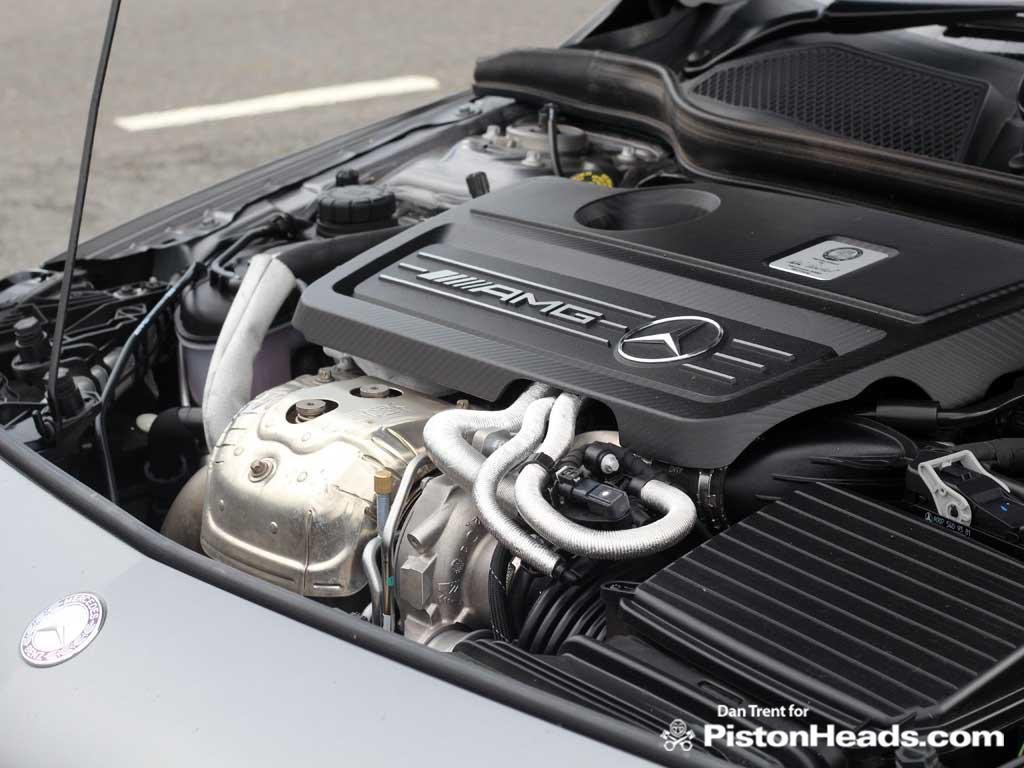 Remember when 190hp per litre was madness?

Which is a shame, because the substance is good. The seats are fantastic, AMG is among the few to realise Alcantara trim on the wheel should be where your hands go, and the engineering is more than sound; it's cracking.

Little details but the linear steering rack AMG insists on over standard A-Classes gives the wheel weight and bite rare in this day and age. This informs much about the handling balance too, which in the Renaultsport style is all about a very positive front end and options beyond that point. It's still a nose-heavy, hatch-based car but the A45 has been set up to reward an assertive, confident driver with an aggressive driving style ready to exploit the traction of its four-wheel drive powertrain.

Different strokes
Obviously the addition of a diff at the front puts more emphasis on the front axle, any drive from the rear subtle in its contribution, at least on these dry roads. You get the impression it'll be just as confidence inspiring when the going gets slippery too, the all-weather cred an important part of the A45's sell over conventional hot hatches. Let's be realistic though; it may have the power of an Evo, but don't expect it to dance like one on the limit. 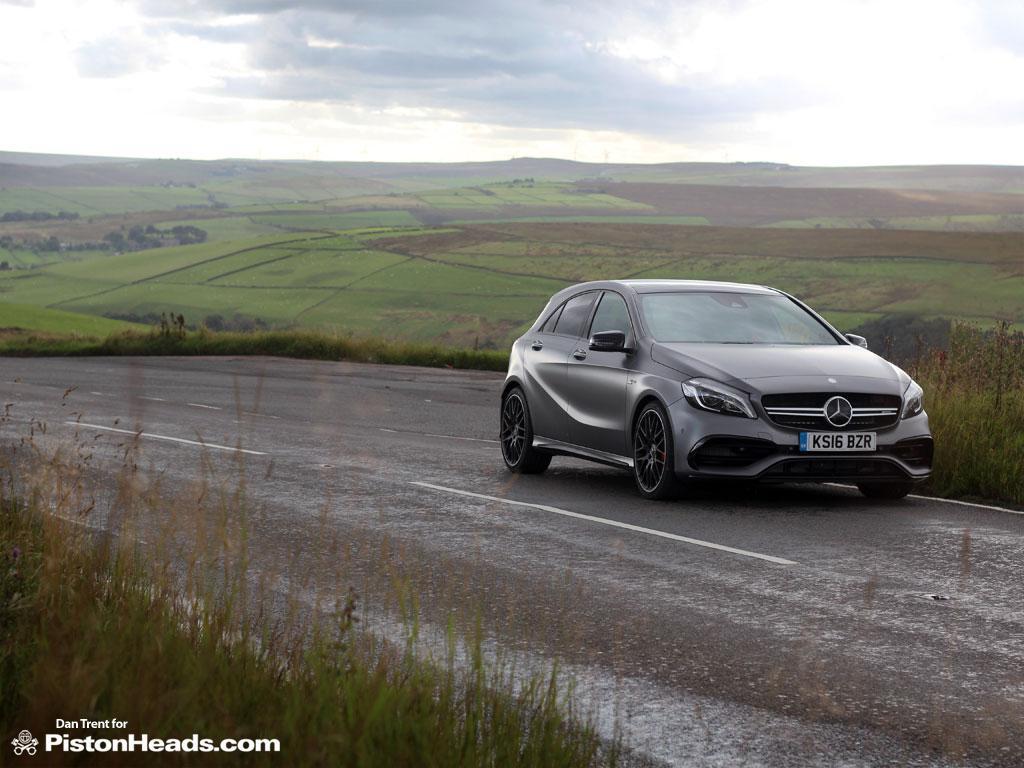 Won't be to all tastes, but it's a fascinating car

The AMG Ride Control adaptive dampers are a welcome extra feature though. Damping is constantly adjusted according to inputs from the sensors and there's a fluidity over the bumps that wasn't present in the previous car. It's still not shy but there's just enough to take the edge off and make the A45 flow with the road rather than take it on in a fight to the death. If you want a taste of that previous character you can pre-select the general 'mood' of the damping with a Sport setting but it's best left to its own devices in the configurable Individual setting.

And this is about the only softening of the A45's otherwise rabid character. The looks still won't be too tastes but in the (expensive) matt grey paint and without the excesses of the optional aero package it pretty much lives up to the premium billing. And if you don't like the hatch the extra power and chassis options carry over to the CLA, Shooting Brake and GLA variants too.