You can't buy the Raptor in Britain, and for good reason. But we couldn't say no to a go... 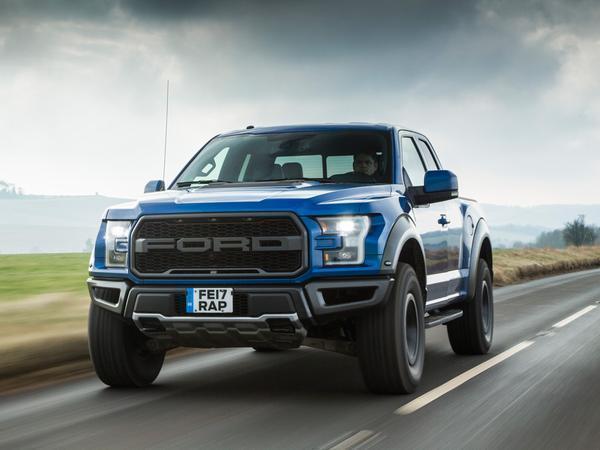 The UK has no equivalent to the Ford F-150. Not just mechanically, but emotionally. No car can claim to be so close to the British heart that its sales volume ranks as unassailable. People buy Fiestas here because they're pretty and affordable and nice to drive. In its domestic market, Ford's pick-up truck is such a long-running phenomenon that such objectivity seems almost by the by. The F-150 is, therefore it sells. Such devotion gives Dearborn plenty of latitude when it comes to finessing the model range, which has made the quickest version a fearsome prospect.

In its previous guise, the Raptor certainly lived up to its name - not least because Ford installed a 6.2-litre V8 but also because it came with the kind of bespoke chassis that embraced heavy-duty off-road treatment. Conceptually, its belated replacement doesn't fall far from the tree (not nearly far enough for Ford to countenance the idea of selling it in the UK) with the biggest news being a powertrain swap-out. Thus the savage thirstiness of the Boss V8 has been replaced by the slightly less savage thirstiness of a 3.5-litre turbocharged V6 - the same basic engine that powers the new Ford GT.

Plainly the Raptor's iteration, mated to a ten-speed auto and variably driving all four wheels, is in a much lowlier state of tune, but forced induction still ensures that it modestly outboxes its larger predecessor, and the switch from a steel body to an aluminium one means that there's over 200kg less kerb weight to shift. The diet however has not precluded the truck getting larger: the track has increased dramatically, taking the Raptor from wantonly large to downright humongous. On one hand its preposterous scale will surprise precisely no-one, but it's worth dwelling on it for a moment because its sheer bigness impacts on just about everything the Raptor does. Or doesn't do.

The latter includes all the scenarios you'd imagine, none of them unfamiliar to the driver of, say, a Routemaster bus - although all are made inevitably trickier by the truck's left-hand drive only status (you can actually have one converted to right-hand drive in the UK, but it's probably cheaper to simply emigrate). The difficulty involved in judging the precise whereabouts of each corner is made doubly apparent by the scale of the interior. Unlike large European SUVs, which tend to cleverly wrap around the driver at some point so as not to seem unwieldy, the Raptor's extremities never seem less than 13 or 14 feet distant.

Everything in the cabin is determinedly oversized, too. The steering wheel and gear lever and anything else that needs pulling or closing is uniformly gigantic, and usually festooned with buttons. The overhead switchgear is so remote that locating it is a little like searching the sky for a lobbed tennis ball. There's room for a rucksack in the centre console. The glovebox is practically in Dover. You get the picture. Now imagine the prospect of driving such a colossus very briskly.

It is not entirely unwelcome then to learn that the Raptor is only fast in terms relative to its size. So while 450hp might sound fairly robust, it must (as ever) be considered in proportional terms - and when those proportions tip the scale at 2.5 tonnes, it's possibly comforting to discover that big Ford is not in the class of a Range Rover SVR or Porsche Cayenne GTS. Not that anyone should mistake that fact for a lack of hustle; when called upon to bear down, the forever roving automatic drops three ratios almost by default and lets 510lb ft of torque from 3500rpm do the heavy lifting.

However, the resulting surge, mild turbo lag notwithstanding, is less neck-snapping than it is eye-opening, as it has the Raptor leaning back on its pliant suspension and simultaneously careening forward. There's no mistaking the body-on-frame architecture - good for toughness and towing (and stronger than ever) but bad for anyone craving a definitive connection with the road surface.

Compounding its meandering sense of detachment is a very un-Ford -like steering rack, which has traded in most of its accuracy and heft for manoeuvring convenience. Not only is it light and relatively slow, but by modern standards there's quite a bit of play in it too - which is decidedly inconvenient when you're trying not to sideswipe an oncoming tractor.

Consequently, you tend to make a discombobulated sort of progress on lesser roads and in towns: wincing at HGVs and traffic islands, never emphatically in control of the twitching mass around you although never entirely against the idea of surging dramatically forward either. Frequently the Raptor is useless in the ten-gallon hat mould - big on attitude, short on manners, undeniably cumbersome - and yet rarely is it bereft of charm.

Not unlike the hat, it's all about finding the right backdrop. Typically this occurs on the motorway where the truck adequately fits lanes measured for commercial vehicles and therefore doesn't require you to be quite so diligent with corrections. With less to do, a flat-out and carefree sort of mosey descends; traceable to the Raptor's ostensibly sporty seats, which are in fact paid-up endorsers of a nonchalant slouch, and a ride quality of remarkably similar bent.

As before, an emphasis on off-road pursuits has endowed the truck with colossal Fox Racing suspension components, to the extent where they dwarf even the add-ons that preceded them; Ford claiming an additional two inches of spring travel, and dampers that have increased 44 per cent in size. The result is a brand of long-wave buoyancy that makes a Land Rover Discovery 4 feel abruptly sprung. Factor in the muffling effect of those massive profile tyres and the Raptor goes big on the kind of long-striding comfort that no doubt helps shrink the distance to the State line.

Liveable would be the catch-all term, although that doesn't entirely sum up the short work the Raptor's chassis makes of a British B road. In practically anything both fast and European (or Japanese or Korean even), experience teaches you to avoid the really tragic bits of tarmac - especially when accelerating. In the Raptor it is possible to pay the condition of the faraway surface virtually no mind at all; whatever is coming your way, speed humps included, is made to seem putty-like by the truck's accommodating running gear.

It is by this virtue that the Ford may be driven very quickly indeed, given sufficient space in a reasonably straight line. However, because stopping and turning in takes a) nerves of steel in the face of shifting weight b) a fair amount of guesswork with regard to the front end and c) endless downshifting on the ten-speed 'box, in the UK the fun tends to be measured by your distance to the next unsighted bend. Of course what you really want (and what the Raptor is plainly meant for) is mile after mile of gravel or sand or shallow mud.

Even when unfairly hemmed in by the slow-down limitations of a British byway, the truck is undeniably compelling off road, not just because the specialized combination of tyres, suspension, two-speed all-wheel drive and a locking rear diff make it feel all but unstoppable, but because the Ford is weighed down by none of the gin-palace ostentation that comes with driving an SVR or Cayenne across the countryside. Instead, with its blocky, cheap-feeling interior fixtures and industrial voiced V6, it remains stoutly blue collar and tool-like.

Were you living in Arizona or Montana or Utah, and frequently visiting the great outdoors, the point of the Raptor would be nigh on irrefutable, just as the reasons for not bothering to sell it in the UK are pretty much self-evident. Driving it here is diverting, but never less than hard work - and that's precisely not the point of Ford's quickest pick-up. Its power and powered-up chassis are all about adding in more fun to the F-150 without dramatically curtailing its all-court usability. And while that doesn't make it right-sized for Britain, it ultimately makes it no less laudable than the ST stripe of Fiesta.